The Doggy, the Baird, and the Bees 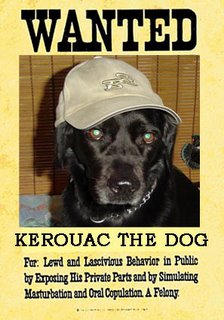 Well blow me down. It looks as if this guy is off the hook after his scandalous performance the other day. When he ran away from me in a park. Made a beeline for my hideous churchy neighbour's pampered male poodle. Mounted it from the front. And started humping its head.

Talk about embarrassing...I could hardly make a joke about where my doggy might have picked up that little trick. Although from the homophobe look on her piggy face I'm sure she had her own idea...... Nor could I really tell her that he's always trying to fuck all kinds of other dogs no matter what sex, how old or how young. From the side, from the back, as well as the front. How he loves it when they're on a leash so they can't run away. Or how the other day he ran up to a tiny puppy, positioned his long legs over it, and started humping the air. I mean how do you explain that one?

So all I could do, while Church Lady looked on pale and grimacing with disgust, was collar my canine Casanova, stammer "sorry" and stumble off. Oh boy did Kerouac pay for that little humiliation. I cut his treat rations in half. And forced him to sleep in his bed for a change, instead of mine. But now I see it's all been a terrible mistake.

It turns out poor old Big Boy was just doing what comes naturally. 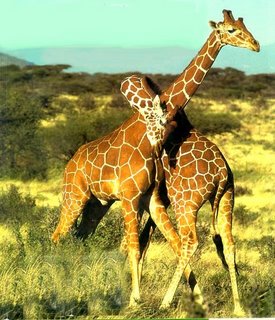 "We may have opinions on a lot of things, but one thing is clear -- homosexuality is found throughout the animal kingdom, it is not against nature,"

Hey even I knew that last part! If only those life denying shrivelled up prune homophobes did too, we'd all have so much more fun. (sigh) But as I've mentioned before we kind of blew that chance for sexual bliss, when we went with the chimps instead of the bonobos.

Still one thing puzzles me. If the birds and the bees are happily fucking away. Could this little Bairdy really be screwing his own flock? 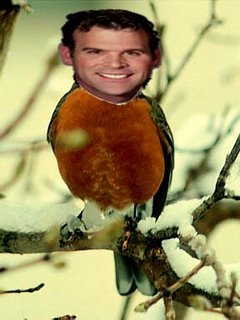 I keep hearing these reports that John Baird is gay. Normally that wouldn't bother me. I figure that any gay person who would work for or support an anti-gay political party must be a deeply disturbed closet queen. And deserves pity as well as scorn.

But this little Bairdy has been acting like a nasty Reform Con hawk recently by slashing the Court Challenges program and crippling the fight for equality of women gays and lesbians.

And not only that. As Paul Wells points out he's such a rapacious Con predator these days that the Parliamentary Press Gallery has started calling wedge issues a "John Baird." Which rhymes with turd and is very suspicious. The worst thing about right-wing fags is how disgustingly eager they always are to please their homophobe masters.

I wonder who came up up with the idea of delaying the vote on gay marriage until just before Christmas and around the time of the Liberal Leadership Convention? Just so they can divide the new leader's Liberals right from the start. I hope it wasn't him. But from what I hear I wouldn't be surprised.

Oh I realize he doesn't want to talk about that. And only Great Leader speaks for Canada's New Nazi Government these days. But if he really is gay. And we ask the little Bairdy the questions we have a right to ask him. And ask them our way. I think he'll sing like a Con Queen Canary.

As for my sex maniac of a dog, he's on a new regime......Lots of treats to make him too fat and slow to catch his doggy loves.

And lots of cold baths... 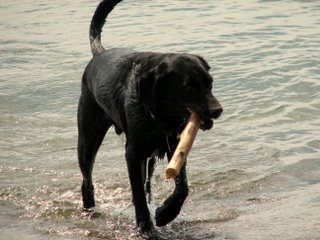 Have a great weekend everyone!

the simpsons is just a little too 'spot on' sometimes.....as in

Smithers, Waylon (Mr)
Mr Burns' assistant at the power plant and at home. Probably the other way inclined. Has the world's largest collection of Malibu Stacy dolls. Helps Mr Burns do everything. Placed a sponge on Mr Burns' forehead and almost killed him as he sunk under the water. Was a member of the Springfield Stonecutters.

OMG, LMAO at the dog story! I had a male dog who did that, too. Once he jumped this big tough-looking male doberman and started humping away with this look of sheer doggy ecstacy on his face... The dobie's owner (mullet, nascar hat, beer belly) was horrified, yelling "KILLER! No, Killer, NO! DON'T LET HIM DO THAT TO YOU!" Meanwhile I was doubled over laughing, going "hahaha oh, I'm hahaha so hahaha sorry hahaha!!"

BTW Simon, I enjoy your blog very much. You write with a great passion that gives me hope for the younger generation.

Hi JJ thanks for your kind comment. And for your funny story. Now that's a hoot! Although it's just as well I didn't meet that mulleteer.I'm kind of shy so Church Lady had me on the ropes. But I wouldn't have been shy with him. I probably would have been tempted to stir things up a bit by saying " oh come on redneck give your dog a break. He's obviously queer. And BTW so am I, So what's your problem? Aren't you?"
You see what I mean...As for the passion part I guess I'm just young and impatient. But I just wish the left could inject a little more passion into our movement. I find us awfully clinical sometimes. Like we have to argue for a kinder, gentler, world. The hideous greedy right wing hatemongers bring all kind of passion to their hateful messages. We have to do the same for our more beautiful and noble one...

Hilarious--it got me to smile after 10 hours of working on a design project. Thanks for sharing. :)

When should the Conservatives stop cutting the Liberal fat?

How about when I don't have to wait 7 excruciating hours in the local emergency room with a sick child to see a doctor?

You get that one fixed and we'll talk about all the "victims" of the cuts to the Court Challenge Program, like...

It called on the federal government to not only increase funding, but also to ensure the program’s long-term financial stability.