Fighting Canucks and the Green Fairy 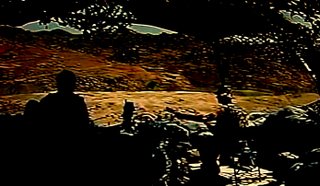 Uh oh. It seems that my last post upset some of the boys in the bunker. Oh not the parts about General Blowhard, they all think he's a hot air balloon just like I do. But the part where I said that we were relying on American warplanes to kill the Taliban. The boys feel that's not giving our soldiers enough credit for all the fighting they've had to do. And all the Taliban they've killed.

They hate the Taliban so much, they believe you can't kill enough of them. And that when our side does kill a bunch of them we should jump up and down like we just scored a goal at a hockey game. We shoot! We score!They die! We win! I know why my gay brothers feel that way. But of course it's more complicated than that. Like every time you kill one of them, you create 150 more.

But I do want to make it clear that from what I hear our troops in Afghanistan are performing heroically,They are fighting like Canadians always have. And as this little video shows they're a pretty tough bunch.

Wow that's the real thing all right. I admire their bravery and determination. I support them a hundred per cent. And I'm sure most Canadians do. But that doesn't mean that we can't criticize the mission. Or demand that General Blowhard tell Canadians the truth about the military situation. Instead of trying to cover it up. Or refuse to allow our chickenhawk President Harpo to sign us up for Chimp Bush's crazy War on Terror.

But what the hell....it's the weekend. Enough about Afghanistan. Too bad we couldn't stop this tragedy in its tracks. But the truth will come out some day. It always does.

Although it's really too bad we can't hurry things up before more lives are lost. Too bad we can't force people to tell the truth, like the Green Fairy does in this Morality Tale.

That'll teach him to turn on the fairy. Now where did that green queen go? I need one of those flutes.

To make a Blowhard General dance and tell the truth.

Although if I can't have one of those. I'll settle for a red tuba...

think i'll get a rainbow piccalo (easy to carry in the pocket)...makes people confess to ever having same sex attractions. should put the religious right in their place :)

and of course troops hate the taliban, they're trained to and it's a reality as our troops are at war and the taliban are trying to KILL them. where do some people get off, not seeing the difference between supporting troops but critisizing the admin. of war????

the army vid was quite something....was actually amazed at how 'movie-like' or vice versa their voices and comments were. brrrrrrrr...wouldn't like being a soldier!!!!

wonder if they train them in alberta's badlands so they can get a handle on hot, dusty, desert conditions?

what the? i was sure i commented...but sometimes i forget to close the window on the box.......anways:

i'm going to get a rainbow piccalo (fits easy into the pocket). that'll get all the homophobic gay bashers to confess to having ever been attracted to teh same sex. i swear there won't be a soul left out.

those army guys are something....yikes!!! and of course they hate the taliban, it's a matter of life or death. an army of love would be a novel idea....perhaps we could work on it.

Hi scout ....sorry....now I moderate the comments I sometimes forget to publish them... But I don't get many anyway. So two comments from blogging friends like you is double the fun!!!
Did you like the Green Fairy story?
The first time I saw it I laughed so hard I almost didn't need a red tuba.... I've got so many people I'd love to play it for!
As for these gungho generals they'll be singing another tune soon. As will Canada's New Nazi Government...

I can’t tell if this got through this morning or not between the word verification and all, sometimes it isn’t clear. If it did, ignore this one.

Some people obviously confuse criticism of the mission with criticism of the troops. There’s a huge difference, I support our troops 100% and as long as they’re in this awful situation it would be wrong to suggest that they are doing the wrong thing. They are following orders, they do it well and they do it professionally, they should be commended.

Perhaps we forget that this is a democracy and the orders they follow are ours to give. That’s a big responsibility, and we would be negligent if we didn’t constantly re-evaluate those orders rather than blindly follow someone’s propagandist notions of right and wrong.

Harper insists on keeping our troops in a dangerous and potentially un-winnable situation so that he can show the world what a great war-faring nation Canada is. With a mission like this one, it’s hard to see what benefit Canada stands to gain other than a nice pat on the back. Anyone who thinks this will somehow miraculously wipe out terrorism is dreaming the big dream. Besides, who’s to say that even if by some slim chance we won the thing, the US wouldn’t claim total victory and forget about everyone else, like they did in WWII?

Critical examination of the mission, not the troops, is necessary to ensure that we don’t needlessly place our troops in any more danger than required. They are far too important and valuable to lose to the ignorant ambitions of a few bad egos.

right on, bruce. harper seems so intent on making a name for himself in the world, but, like, forgit it!!!

simon, ha, ya, i noticed the moderation after the second post...gee, i'm not so sure i like having both up,, but whatever.

ya, the green fairy was hilarious!!! it would really be great if that flute and tuba did exist! loved the part too where the guy made the fairy 'confess'. gooder.

Yeah Bruce good comment. It kinda sums up how I feel.It anoys me to see people equate support for our troops with support for this doomed mission. But what really makes me see red is when Harpo and the blowhard generals claim that it's part of the War on Terror and that it will make us safer in Canada.It won't. On the contrary it will make us more vulnerable.Anyway the good part is that more than 60 percent of Canadians think it's a lost cause. All this neocon blimpery didn't fool them a bit...It gives me hope that this bad movie will soon be over.

Scout.... you know the only thing that disappointed me about the video was that I kind of expected an actor playing Chimp Bush's poodle Tony The Arse Blair come out and be forced to do a little dancing. The war in Iraq destroyed his political career. Let's hope the one in Afghanistan does the same for Harpo....

why don't they ever make vids of the skinny, pimply faced kids with helmuts on? or of guys shitting their pants? or crying or screaming?

how 'bout a full length feature that doesn't have some big handsome guy as the lead?

christ, when i fly to the states and see all those kids headed to iraq, or just grouped somewhere, if possible i always stop and yack with them, give them positive words etc... they all say they're afraid, or if they've done a tour say they never want to go back. how can one NOT support them?

let's hope afghanistan ends so we don't have to see our canadian lads and lasses in the airports (i assume they leave from the east, never seen any in vancouver).

at least there's still no conscription.....i'd haul my daughter and her friends to some remote reservation, or tell her to get pregant (whoa, wait, that's getting desperate mom, slow down!!!)