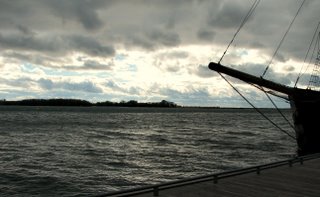 It was grey windy and cold down by the lake today. But it didn't bother me at all. My friend Donald was visiting me. He drove all the way from Montreal to tell me something he said he absolutely couldn't tell me on the phone. And I was so happy to see him, it almost felt like Florida.

I don't have many straight friends anymore. I kind of shed most of them in the last few years. When after I left school I couldn't connect the dots between their lives, and my life and my struggle. And I realized that they didn't even want to try. But Donald is straight. And he's my oldest and best friend.

He's from a small village in Scotland that makes my village look like a city. He was orphaned at a very young age, and raised by his much older brother and his French wife in Montreal. We share a lot of things in common, a million crazy adventures, a hatred of crazy right wingers and religious fanatics, and our love for old New Wave punk music. and roots reggae. But most of all we share a love for playing soccer.

We played together on different teams all over Montreal. When we were at McGill we spent hours just the two of us racing down the little field near the Winter Stadium, kicking or heading the ball into an empty net. If I had a dime for every time I've had a dream about him and I playing for Canada in the World Cup final, I'd be a millionaire.

But what sets Donald apart from most straight men is how he relates to gay people. He doesn't just accept or tolerate us. He treats us like he treats any of his straight friends. He's interested in our lives, and helps celebrate them like me and my friends celebrate his. Which means that I can share my feelings, joys and private sorrows with him. And he can share his with me, in a way that most straight men usually can't.

We can also lounge about on some sunny terrasse and point out goodlooking men and women to each other. And laugh about the funny and terrible things that happen to both gays and straights in love and lust. He can get also get away with being outrageously cheeky. Like when he came up to me at a soccer practice, while I was chatting with some very straight guy on the sidelines and said loudly: "Simon are you playing today or are you cruising?" And worse things than that. But since I know he doesn't have a homophobic bone in him, it just makes me laugh.

Because he is the way he is, and because he doesn't have any hangups about his own heterosexuality, like so many homophobes do. It also means that when we haven't seen each other for a while, and we meet in some airport or railway station. He's the one who hugs and kisses me like a crazy man or a Quebecois. And I'm the one who turns red. And worries what people might think. Coz he couldn't care less.

And as if that wasn't enough, Donald doesn't just support our struggle for equality, he marches with us. And he carries some of the best and gayest signs! The last time I was at a Pride Day with him he was carrying a sign that said " Gay Marriage is just another battle....the War on Bigotry continues." How could you not love a guy like that?

So I was really dying to know what was so important that he had to drive all the way to Toronto to tell me. Instead of just telling me on the phone. But he saved it for the end. Until he was just about to leave. And we took one last walk down this lonely boardwalk. 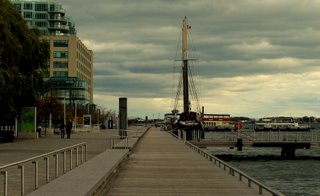 Then he told me. That him and beautiful sweet girlfriend are getting married in December, and that they are expecting a baby in the Spring. And that he wants me to be his best man. And that she wants me, because I introduced them to each other, to be the Godfather!!!

And that if the kid was a boy, and he turned out to be gay, Donald said that he hoped he would be just like me. A really great soccer player. And a shit disturber too!!

I was stunned. I admit I had tears in my eyes. But I quickly recovered. And gave him such a big hug, and so many kisses on both cheeks, that we almost fell into the lake. This time it was his turn to turn red. Finally!!

I must admit that I was just a little sad too. It's one of those events in life, one of those life passages, that makes you realize that time moves on. And some things can never be the same again. But I'm sure going to enjoy the sight of a little tyke chasing a ball up and down a field with his or her dad. Just like I did.That should be really special. That's what friends and family values are really all about.

I wish there were more straight men like Donald. Free from unhealthy hangups, free from the poison of hatemongering religion. Unafraid to be called gay by our enemies for standing up for us. Free from hate. And willing to fight with us to defeat that hate wherever it rears its ugly head. Imagine what a better, safer and more fun world that would be for all of us. But the sad truth is there aren't enough people like Donald. So the struggle continues.

But at least the crazy wingnuts now have one more good reason to fear me.

From now on they don't have to call me Mr Faggot anymore.

They better call me Mr Godfather or else.....

P.S. If you like my new little flag you can get it and other versions from Bruce at Canuck Attitude

I'm one of those hetero deviants that would be proud to march, disturb shit, and play soccer--I mean real football anyday. I'm even a registered priest.

Just don't hold being from Saskatchewan against me. :)

OH! such a moving story, simon! isn't donald the biggest gem? wow, what an honour to be a gawdfather. know you'll do good by it. and ya, that's MR. GODFATHER to all the little jerks.

That was a very cool story. Thanks for putting out here!

Hi Jay! Excellent! We need as many good heteros on our side as we can get.It's your struggle as well. All part of the same struggle for a saner and more just world. And of course you're right it really is FOOTBALL. I hung on to that word for years....just like I hung on to TO-MAH-TO. But in the end I gave up :)

Hi Scout...did you like that story? cool!! It's kind of small and personal.But I thought it might help to illustrate a larger truth. That although I sometimes get real mad with straight people I know there are some good ones out there...As for Donald yup he is a gem.As I tell him all he needed to be perfect was to be gay. So close and yet so far... Seriously though...despite the way I am and all the crazy things I've done I've been lucky that way...

Hi Rick...thanks for stopping by. I admire your blog and what you do for our cause a lot. I'm glad you liked my story about Donald. As I said it's just a little story.And I do wonder about whether I should talk about such private things. Because private is good too :)But these days just showing gays and straights relating as humans is probably not a bad thing...

It's not a bad thing at all.