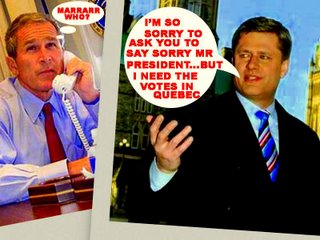 I see that Stephen Harper called his hero Chimp Bush to warn him that we were about to complain about the way the Americans treated Maher Arar. And I'm sure to beg Bush for forgiveness. Although by the way Harpo was blowin' about it afterwards you'd think he'd really put the Chimp in his place.

Canada wants to hear that "these kinds of incidents will not be repeated in the future."

Bush "had some awareness of the issue," seemed to be sympathetic and said the U.S. government would respond, Harper said.

Not repeated? Some awareness? Sympathetic? One pig telling the other to "come clean?" Don't make me laugh. Imagine the scene in the White House bunker. The Chimp, Cheney, Karl Rove, Rumsfeld, and Condi are all huddled there trying to figure what the fuck to do. The enemy is at the gates of the Green Zone in Iraq, The little pages are taking down the Republican Mafia. Their polls are going south only weeks before the midterm elections. They can't decide whether to attack Iran or North Korea.

And then their little stooge in Canada calls up to demand an apology. For some guy with an Arab name, one of the million victims of their crazy War on Terror? Hmmm.....I bet that went down like a lead balloon. I bet Cheney loved that one. 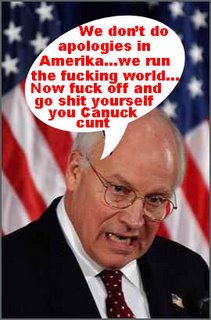 I bet Great Leader had to slap himself loudly on the speaker phone, and promise to shit his pants and wear them like a tuque before the Chimp Gang would let him hang up.

But then he's been wearing that tuque for a while. So I very much doubt that his fake demand for an apology will fool any Canadian into thinking that Harper tells Bush what to do. Rather than the other way around. Chimp say, poodle do.

But enough of our pathetic yankee loving homophobe of a President, and his New Nazi Government. It is the long weekend after all. I just want to correct something I said in this post.

".....Too many Canadians, even so-called progressives didn't respect our struggle for equality. They thought it was about sex instead of love, like our enemies do...."

Well I was right about our enemies...The insane hatemongering right-wingers are always trying to portray gay people as sexual predators. Although they are the scary ones.

Just as the scary right-wingnuts in Amerika are trying to do with the Foley scandal.

"Congressman Mark Foley was a homosexual" and "homosexuals tend to be preoccupied with sex."

"Well, this man's gay, he does what gay people do, and so don't worry about it."

When they're not smearing us, they're smearing the Pages. Is that sick or what?

And I was right about the progressives too. They shoved our struggle to the back of the liberation bus. So it has been a really long journey. But they know that.

What I was wrong about was making it sound like you can separate sex and love, when of course they get all jumbled up. From what I see on the internet, and in the real world, there are a lot of people looking for sex out there .... IM or otherwise.

But I'm willing to bet that most of them, gay or straight. are just looking for love. Gay men, because they are men, may have more sex than straight people. Or not. But thanks to the crazy hatemongers, and others who don't think we are as human as they are, finding love can be more difficult than it is for others. And that's hard enough.

Luckily, as this video shows, gay love usually conquers all. After some.....er..... bumps on the road of life.


They can't spell just like straight kids can't.But wasn't that cute? Gay, straight or whatever, everyone is hoping for a happy ending. One love is just as crazy and as beautiful as the other. The sooner everyone comes to term with that simple human truth. The sooner the hate will stop.

As for the mongrel homophobes and their life denying claims that all we want is sex not love. I want them to know that my hero and buddy Sebastien is coming home tonight.

And I'm planning on getting both! Whoopee! Eat your hearts out you frigid fucks!

And furthermore......I want these wingnut dingos to know that if they don't stop their infernal yapping about gay marriage and how it's an affront to their bloodthirsty Devil Gods. And will lead to the collapse of so-called civilization. I just might have to add to their misery. And make them even more rabid than they already are. By whipping out my doomsday weapon.

And asking him to marry me...

When sex and love are resistance ....how can we lose?

Enjoyed your blog - and trust me, we don't have much respect for our government either (well, at least as far as the Bush Regime goes) - they are such HYPOCRITES and LIARS! I can honestly say that while no place is perfect, and I'm sure Canada is no exception to that rule, I don't have one negative thing to say about Canada or Canadians - and I have spent a lot of time up there! Of course, maybe if I lived there I'd complain! :-) Hopefully, come our elections in November, things will change...

we're all hoping things will change, no matter where we live :)

Believe me we're pulling for you guys. If you can topple the Chimp our poodle will be lost.Sometimes I blast away at what I call Amerika. But that's Bush country. I never forget that there are millions and millions of good Americans who are fighting for the same saner world we are. Good luck in November! We'll be keeping our fingers crossed...