Erin O'Toole and the Con War on Women 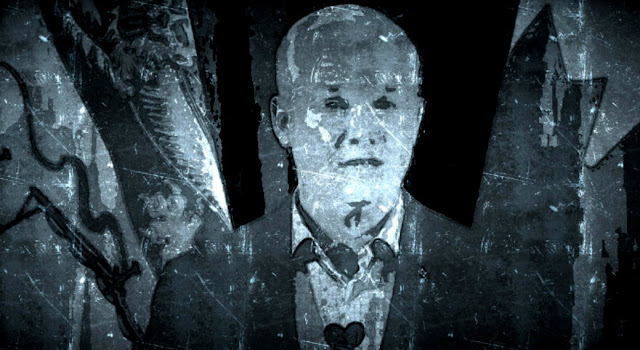 The look of shock and despair on Erin O'Toole's face said it all. And who can blame him?

A few days ago Justin Trudeau announced that his government would put pressure on New Brunswick to pay for abortion services at a private clinic in Fredericton.

As the Canada Health Act says they should do.

But when O'Toole was asked whether he would do the same, his answer was no. 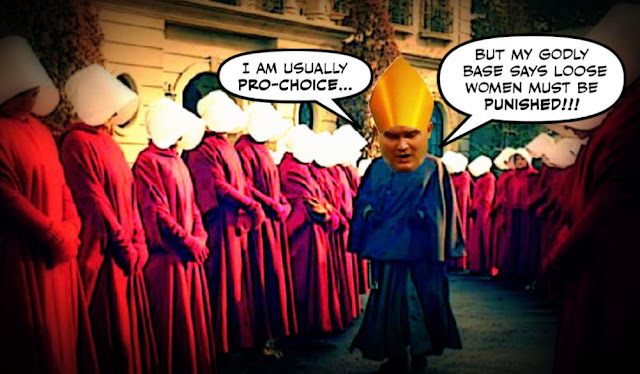 Which put him squarely on the side of those who would deny women easy or easier access to abortion.

Federal Conservative Leader Erin O'Toole says he would leave it up to the New Brunswick government to decide how to provide and fund abortion services if he becomes prime minister.

During a stop in Fredericton on Friday, O'Toole said Prime Minister Justin Trudeau's repeated promises to force the province to pay for the service at Clinic 554 amount to politicizing the issue "for his own political gain and to divide Canadians."

And made him look like a person who would not respect the Canada Health Act, and the latest member of the Con Coat Hanger Club. 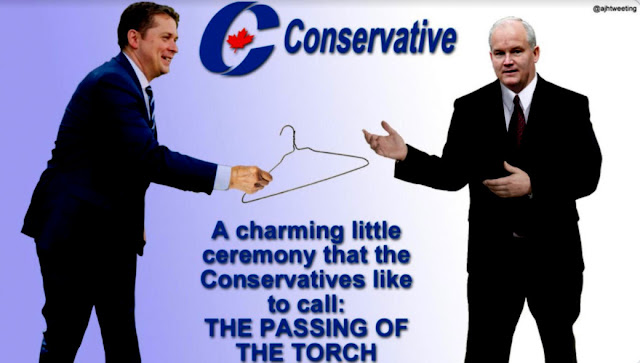 Memeditorialist
O'Toole had no choice of course, not with all the SoCons in his caucus who want abortion criminalized.
But it did give Justin Trudeau an excellent opportunity to issue a statement in support of a woman's right to control her own body.

Which should help him win the support of even more progressives all across the country, and make it easier for him to get a majority.
While making the Cons look like kooky religious fanatics... 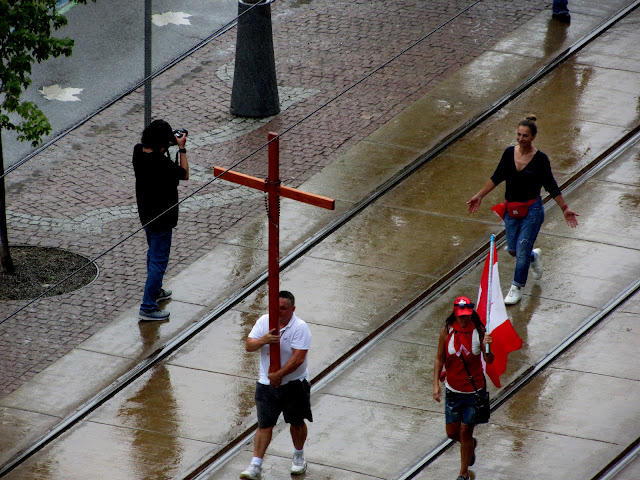 Who are more American than Canadian, and a threat to this country and its values.
Which shouldn't really be a surprise. Not when the Liberals, as Lawrence Martin points out, are still the natural governing party.
Canadians are predominantly progressive. It is evident in almost every election, wherein the combined vote of centre-left parties easily surmounts that of the conservative vote.
The Liberals have been in power 71 of the last 100 years, 31 of the last 50.
And there's nothing the Cons and their shabby stooges can do about it.
Many on the right gripe that the media are biased toward the Liberals. They might consider that their real problem is that the Canadian people are biased.
Today’s Conservatives tilt against the zeitgeist. Since the demise of the old Progressive Conservatives, they are a party anchored further on the right, entrenched on the Prairies but nowhere else.
Not when they have loser leaders like Erin O'Toole... 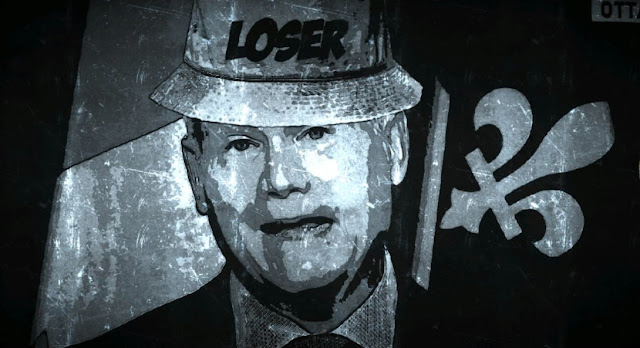 And time is NOT on their side.
Modern history shows parties governing in roughly 10-year stretches. The Trudeau Liberals have been in power for six, suggesting the fatigue factor likely won’t do it for the Conservatives this time. To stop the Liberals they’ll need a series of fortuitous campaign surprises. Otherwise the beat goes on. Otherwise, the natural governing party wins again.
You know, I'm always being attacked in the most vulgar manner, by ghastly Cons who seem to think that I should be ashamed of supporting Justin Trudeau and his Liberals Party, even though it's the most popular political party in Canada.
The latest being the ugly misogynist Thwap, who attacked me and our precious and incredibly talented Jackie Blue, like only a Con could.
But I am proud to support a party that stands up for men and women, young and old, and the amazing diversity of this country.
One that best represents our precious Canadian values.
And has a leader like this one...

The smelly old misogynists will scream, try to destroy Justin Trudeau, and try to turn the clock back to a darker time.

But slowly but surely they are dying out.

O'Toole's number two - Outhouse (no, I'm not making this shit up) - is double dipping by going around the country as an 'independent' consultant coaching 'social conservatives' on how to win nominations. Yes, O'Toole knows and is fine with a taxpayer subsidized flunky using his office for gain.

Aw, thanks Simon. But having battled their ilk on my side of 49, it comes as no surprise to me that the Bernouts of the north just keep revealing themselves over and over as misogynistic commie cons. Two sides of the same horseshoe, or should I say, horse's ass.

BTW, just a reminder: Jagmeet said last year that O'Toole and the cons were no threat to women's rights. This aged about as well as O'Toole himself has. Send this out to your tweeps, s'il vous plait! The dirtbag left branch of the Canadian Republican American Party are NO FRIENDS OF WOMEN!!!

Oh, and get ready for next week! Bonus juicy poll from Franky in this Hill Times article... 👍

I missed that. I assumed he was a party employee which was bad enough but if even if he is an exempt employee that is disgusting.

I suspect 15 August. O8 August feels a bit early but then I am a traditionalist. Canvassing needs a bit of frost and bone-chilling rain.

It looks like a good time to invest in the long knives market. It's going to be dirty but fun to watch.

Reformatories covens are already auditioning for the old fool's replacement. Whoever they choose, good luck with that bunch.

Jasmeed hasn't improved recruiting, policy or finances. The NDP may hold onto most of their seats but that will not be enough to save Singh.

There is no green leader but she will be fired anyway.

The Bloc is pretty happy now and Blanchet should be safe.

There are ambitious Liberals who want to wear the crown, but after watching JWR's political suicide they will be well advised to be patient.

So , will be looking at three rookie leaders in the house next spring?

Hi anon@9:01 PM...Yes it is ironic that Captain Outhouse would employ another Outhouse to do his dirty business. And it is a dirty business. I did a little research on Mr Outhouse and discovered that he is a real religious fanatic. No wonder the Cons are now little more than a far right religious cult. The Cons are a real threat to to our democracy and secular traditions and still our useless media does nothing....

Hi Jackie....Thank you for that Twitter link on Singh. I can't believe how flippant he is about the rights of women and gay people. That man is as progressive as a three dollar bill, and it's about time that poseur was exposed for what he is. I saw that Hill Times article, and I think I'll write a post about the election countdown, as soon as I recover from a slight case of sunstroke, which for a moment I thought might be a case of Covid. Seb is now threatening to crazy glue a hat to my head, but who knew you could get sunstroke on a 20 degree day in Canada.
Oh well, as long as I'm ready to go next Sunday I won't complain. I'll have roast beef, Yorkshire pudding, and O'Toole on the side...

Hi jrkrideau....Outhouse has a good deal going. He is getting paid for his regular duties, while getting extra money to recruit hardline religious fanatics. If the Cons were still a Canadian party there would be a ruckus at the way the nomination process is being corrupted, but since they are not there is nothing but silence. As for the date of a possible election call I think it's going to depend on the progress of the Delta virus. So I agree with you, the later call is more probable, especially since thanks to the climate emergency August could be a very hot month...

Hi rumleyfips....I would love to see three rookie leaders in the house next spring. But I'm afraid that if O'Toole does manage to hold the Liberals to a minority, he'll declare it a monumental moral victory, and stay on. As for Jagmeet Singh, the poor losers from the NDP now consider him a demi god, so he'll have to lose a lot of seats before he gets the boot. All the opposition leaders are so mediocre, but I suppose that's a good thing....

Word on the street is O'Toole's rusty blue pickup is the perfect QAnon-equipped, reality-resistant family vehicle, for the steroid-enhanced, follicularly challenged man about town friendly sausage maker looking to transport a weapons arsenal to the grounds of Rideau Hall. Included with the base model are plenty of logical fallacies, Fuck Trudeau bumper stickers, and all the phoned-in favours -- I mean, answered prayers -- that the church collection basket can buy.

Reinforced with tin foil and bags of hot air, it's powered by torqued coverage and 100% renewable-energy bullshit. A midsized gas-guzzler for a midlife crisis that only goes in reverse. Plus, rumor has it, the monster truck with the wheels coming off is a hand-me-down from Kenney -- and it runs like a defective Ford. 🚚

Hi Jackie….That Unifor is one of the best attack ads I’ve ever seen. I laughed so much I had tears running down my face. If other progressive groups can do half as well, Trudeau will get a majority. And since Kenney also made his grand entrance in a blue pickup truck the possibilities are endless….