Well Justin Trudeau hasn't yet issued an election call. He's apparently too busy leading the fight against the pandemic.

And making sure we are prepared for the next one.

But don't be disappointed, there is a race going on.

And a desperate one at that. 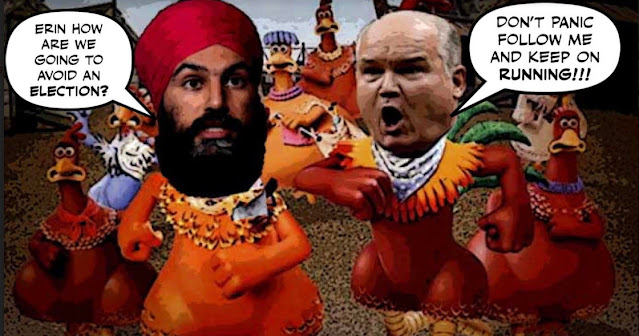 With both Jagmeet Singh and Erin O'Toole running away from an election as hard as they can.

O'Toole claims it's too dangerous to hold an election during a pandemic.

Conservative Party Leader Erin O'Toole said Monday with COVID-19 case counts rising in many provinces as the potent delta strain takes hold, it's not the right time to plunge the country into a federal election campaign.

Even though that didn't stop him from flipping pancakes, without a mask on, at the Calgary Stampede. 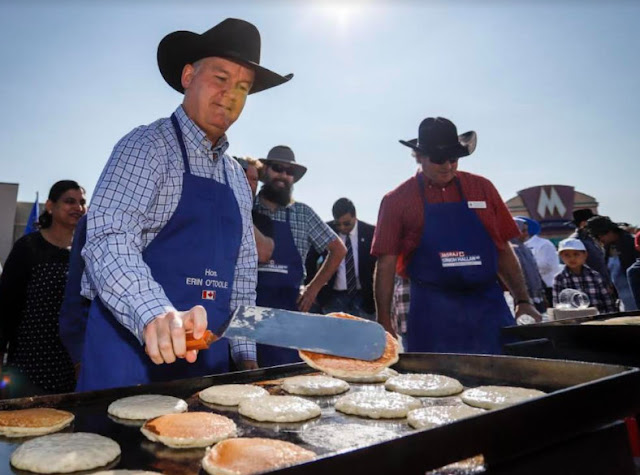 While Jagmeet Singh, is also demanding that Trudeau not call an election, claiming the pandemic hasn't ended, it's still too dangerous.

And Trudeau is being "selfish."

Even though he campaigned with BC's John Horgan back in October when Covid cases were surging, and most Canadians had not been vaccinated.,, 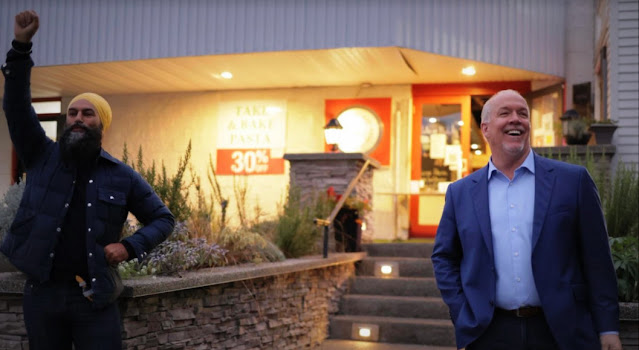 Which also makes him a ghastly hypocrite.

But then we know the real reason Singh and O'Toole don't want a election:

The numbers keep on coming and they are all bleak. 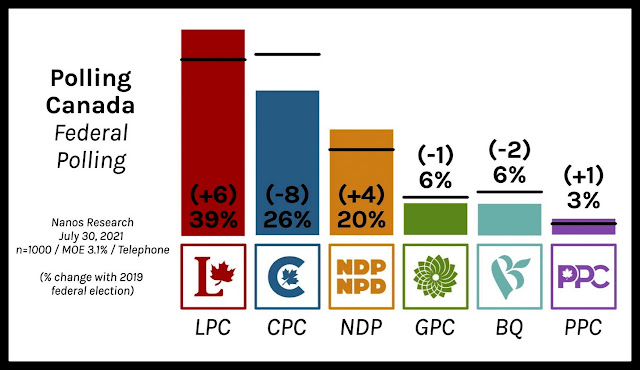 They both know what's coming... 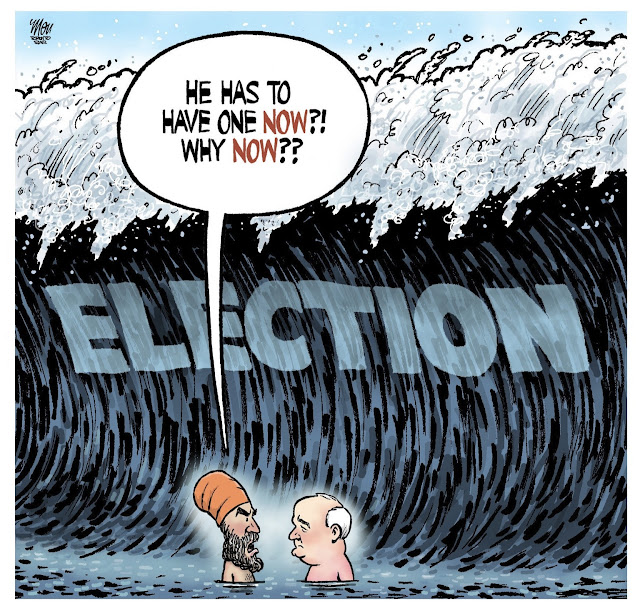 They're about to get a bath.
And to make matters even worse, if that's possible, it seems that most Canadians DO want an election.

By a 2 to 1 margin, folks are happy to have a chance to cast a ballot and help choose next government than being upset at @JustinTrudeau for calling an election.

Look out for full and final results later this week.

We are doing a BIG 3,000 person sample#cdnpoli

So both of them really do look like chickens, who have no respect for democracy, and are only thinking about themselves.

While Justin Trudeau who has more than proved himself during some of the worst times Canada has ever known.

Is hopefully poised to win a majority our country needs so badly.

And he so richly deserves... 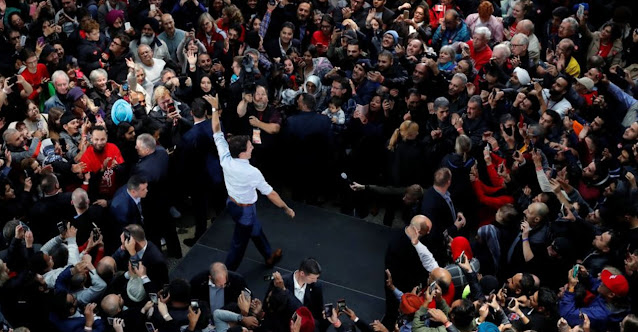 As JT talks about mandating Covid vaccination for the federal public service and federally regulated workplaces, the Libs won't say whether their candidates are vaccinated or even whether the party requires that. Of course, the Cons are no better. But you'd think the Libs would want to assure Canadians of a safe election campaign and put the anti-vax Cons on the spot. I guess not.

Hey Simon, check this out. Poor Jagmeet, another lie bites the dust.

Once again the NDP is rendered useless by that sneaky Liberal trick of.... the government actually doing its job and following the constitution. Looks like jurisdiction matters after all.

Hi anon@8:54 AM...Your comment is out of date, tell your comrades at the NDP Propaganda Department to do better:

I'm glad that all NDP MPs are fully vaccinated, but then there are so few of them they can't afford to lose any... ;)

Hi Jackie....I am so tired of Singh's failure to understand and respect different jurisdictions. I realize they're a pain, but you can hardly aspire to lead a country if you don't understand it. So Jaggy needs to hit the books, or get out of the way of people like Trudeau, who are trying to make this country better..,

The Cons and Dippers aren't the only ones going WTF? at a fall election. Former Chretien fart-catcher Peter Donolo isn't so optimistic:

[W]hile every poll shows the Liberals currently leading their rivals, elections in Canada have become notoriously volatile affairs. Remember when Mr. Trudeau and the Liberals entered the 2015 election in third place? Add to that the fact that the Liberals have yet to pierce majority territory in most polls, and that incumbent Liberal governments historically tend to lose altitude during federal election campaigns, and it starts becoming clear that – as currently defined – a fall election looks less like a slam dunk for the Liberals, and more like a risky proposition.

Donolo's recommendation? The federal vaccine passport the Libs just announced. People outside AB and SK are getting pretty pissed at all the covidiots and antivaxxers so he might be right. Presumably the Libs have done their polling on this.

Your link says the Libs are checking, so they still don't know if they have covidiots in the woodpile. It's amateur hour at Lib HQ!

Try again anonycon. The Liberals have not yet nominated their full slate of candidates, so they're going to need to do a quick run-through for their incumbents as well as anyone yet to be added to the team.

The only covidiots are on your side of the aisle.

I would take anything said by a Chretien Liberal with a grain of salt.

When Justin Trudeau took over the Liberal Party he broke the grip of the old guard on it. Ironically, he used their disastrous showing in 2011 to convince Liberals to do so.

The old guard was not happy and they continue to be unhappy, mainly because they were frozen out of all of the lucrative patronage positions that came available when the Liberals won government.

Some took it personally and have been actively working to undermine Justin Trudeau ever since. Others have just become concern trolls. They often make statements like Mr. Donolo's and they are often used by the media to provide the "Liberal" perspective on issues.

Hi anon@5:03...The Liberals are already working on setting up vaccine passports, not only is it a good idea, but it's a natural wedge issue to use against the Cons. So Donolo isn't telling the Liberals anything they don't know. He's an old Chretien hack who would dearly love Justin Trudeau to lose, but like all the others is going to be very disappointed...

Hi anon@5:57PM...Oh boy you must be really desperate. The difference between the Liberals and the Cons is that if a Liberal is found not to be vaccinated, they will be jabbed in a matter of hours. While the Con anti-vaxxers will join Maxime Bernier's kooky party rather than do the right thing. As for your claim that its amateur hour at Lib HQ, when I read that I couldn't stop laughing. Ha ha ha ha ha ha ha ha.....

Hi Steve...I don't know why the Cons and the NDP are so afraid of an election, when the normal lifespan of a minority government is about two years. I realize they're afraid of Trudeau winning a majority, but have they no respect for democracy?

Hi Jackie....The Cons are so desperate they are seeing covidots like themselves all over the place. They don't seem to be able to see themselves in a mirror, so they can't understand how low they have fallen. Poor Cons they're heading for the garbage can of history and they don't even know it....

Hi Ottlib....Thank you for that excellent history lesson. One of the best things Trudeau ever did was to get rid of that old guard that had so corrupted the party. They are still squealing years after they were given the boot, with Warren Kinsella being the most obnoxious example. Hopefully another Trudeau mandate will finally shut them up....

this is hilarious. the cons all chanting FULL FOUR YEARS! TRUDEAU THAT GOOD! FOUR FULL YEARS! Like what are they afraid of? its almost an indorsement. Just like their brethren the BC liberals last year. Some are still squealing about it. never get too confident. I plan to vote by mail. My riding is a cake walk for the liberals so I'm going to study the candidates and perhaps support a younger candidate. It wouldnt be a vote against my MP per say.

I forgot to add I'd like ranked baloting. And a return to a per vote subsidy off the first run