Curiousity, Mars, and the Triumph of Humanity 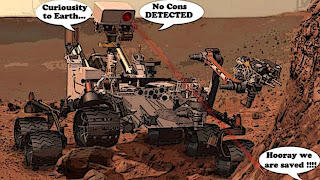 I just can't help myself eh? I just had to insert the Cons, like an ugly alien probe, into this amazing story.

The US space agency has just landed a huge new robot rover on Mars. The one-tonne vehicle, known as Curiosity, was reported to have landed in a deep crater near the planet's equator at (05:32 GMT).

It will now embark on a mission of at least two years to look for evidence that Mars may once have supported life.

Not just because I live in Harperland, and I can't help thinking all the time about the greasy dictator who hates science eh? And how can I escape the living nightmare that Canada has become?

But mostly because I don't want people to know how much the landing moved me beyond belief. Or how much I wanted it to succeed. Especially after Curiousity sent me this tweet.

And I knew the seven minutes of terror would soon begin....

Or how I found myself getting all choked up, when the magic moment came.

6.30am: Parachute deployed. The probe is decelerating.

6.32am:  Now around 4km from the surface. The retrorockets are firing. Velocity is 50metres per second.

6.32am: The sky crane is now lowering the rover.

Because I know humans have done many great things. But that landing had to be one of our most amazing. And boy did we ever need it.

To show what we're capable of doing when we're not killing each other, or destroying our beautiful blue planet.

Simon to Curiousity. OK. I admit it, you brought tears to my eyes. That WAS awesome. Bon voyage my little explorer.

And if you meet some of the other smaller robots up there try to be nice, and forget everything they taught you on Planet Earth... 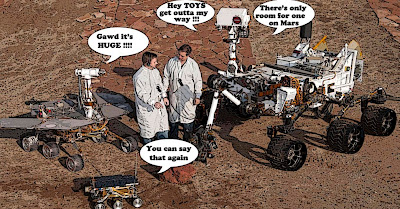 Oh yeah, one more thing. If you meet the Martians please tell them to come and rescue me eh?

For I'm living in horrible Harperland.

Well, worst comes to worst we can terraform Mars if we kill our own planet- assuming it can support life. I hope it doesn't come down to that, though I have a bad feeling in my gut that it will.

This planet is dying. Now even the skeptics are believing this. Even skeptic scientists are becoming very alarmed. Global warming is even worse than they thought. There is no doubt, the dirty tar sands have the potential, to kill this entire planet. Even the seas are on an overdose of Carbon dioxide. They have found acid in the ocean, right up to the shores of BC. If the oceans die, we die. We are destroying, everything that is vital for life.

So if we can possibly escape to Mars to survive...Harper, Enbridge, and Alberta, must be banished from Mars. No doubt, they would look for dirty oil there too.

hi anonymous...for the first time there are some serious discussions about how we could artificially engineer a way out of global warming. Or at least serious proposals. Which tells you how desperate the whole thing is becoming. I've always thought that humanity would pull back from the brink just in time, but if warming is happening faster than we predicted, it will be too little too late...

hi anonymous...yes it's amazing how a brutal drought helped change a lot of minds in a hurry. I believe I read that in the U.S. the number of people who now believe in global warming has gone up from 40% to 70% in the course of one summer. But is it too late to stop it?
I don't know. But I have to admit that after living in Harperland for so long, I'm starting to believe that I must have come from another planet. And whoever they are I demand to be rescued !! ;)