Stephen Harper and the Rotting Regime 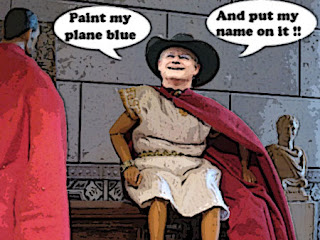 Sometimes it's the little stories that tell you so much about the way Stephen Harper's Con regime is slowly rotting from the head down.

Like the story of how our mad emperor tried to turn his government of Canada chuck wagon  winged chariot  into Air Con.

Prime Minister Stephen Harper’s staff has directed in meticulous detail the design of his VIP Airbus, going so far as to instruct defence department officials to include a faded maple leaf on its tail similar to one used on the Conservatives' election campaign bus.

Neal said the PCO wanted "small Maple leafs with relief and fade effects" around the door. On the plane's tail, Harper's officials wanted the Canadian flag replaced with "just the Maple leaf, stylized with a fade effect ... Gold Maple leaf on the winglet" and "The words 'True North Strong and Free' (in) English and French."

For surely his vanity and megalomania have reached new and dangerous heights lows. I mean what is he suggesting? 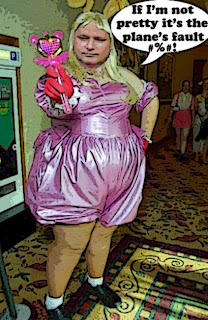 Gawd. Today it's a toga and a cowboy hat. Tomorrow it's a straitjacket and a football helmet.

Then there's the story of the former PMO staffer from Quebec, who has just thrown his new cowboy hat into the ring in CALGARY. And whose only qualifications seem to be his former association with the Harper mob, and his burning hatred of Tom Mulcair.

So great is Soares' apparent antipathy towards the leader of the opposition, in fact, that his list of commitments to putative constituents puts "expos[ing] Quebec's Thomas Mulcair's hypocrisy and duplicity and the NDP's attacks on ... the oilsands" as his top priority, beating out "gold-plated" MPs' pensions, CBC funding and even support for "Minister Jason Kenney's immigration reforms."

Which in Alberta means he should win easily.

Or how about the story of Harper's personal photographer, who bounced another photographer out of a choice gig at the London Olympics.

The Prime Minister’s official photographer, Jason Ransom, has turned up in London as part of Canada’s Olympic team. Though Ransom obtained ethics clearance to do the job, it’s an appointment that is generating legal controversy, from a photographer who says he was shunted aside from the assignment at the last minute to make way for the Prime Minister’s employee. 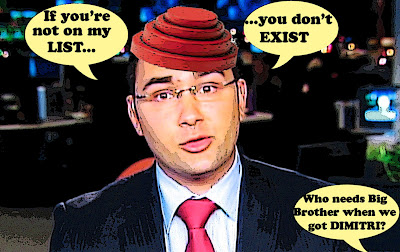 Though Harper’s government has taken a dim view of the “who-you-know-in-the-PMO” kind of cronyism they associate with the Liberal party, Ransom has landed in London along with someone he used to know in the PMO — former communications director Dimitri Soudas. Soudas is now executive director of communications for the Canadian Olympic Committee and he too confirmed on Thursday that his old colleague is working with him in London.

What a small world eh?

Yup. As I said before, a fish rots from the head down. By the time this ghastly regime arrives at the next election there won't be much left.

And what's left, and isn't in jail,  will be easily scooped up with a shovel, and deposited in the garbage can of history.

Hey. How about that Olympic spirit?

The Cons are in London.

I love the animated short - beautiful.

The Liberal sense of entitlement seems dwarfed by these con clowns. I would love to know the price tag on that whole RAF One design process. I'm betting it cost more than Oda's London travel bill.

What is the old saying about power corrupts & absolute power corrupts absolutely? Stevie slime & his slimers would appear to have a bad case of megalomania.

stevie slime's insertion of "his people" in positions usually occupied by working people is an attempt to control the message. Stevie is hoping he will get all the press or be affiliated with any wins & that the Canadian O. team is made to appear as an extension of him. There is nothing the idiots won't try to use for their own message. Of course their might be a problem when one of those Canadian Olympians don't want to appear with the slimers or have some forth right things to say. I guess we'll catch that on the american news.

What about the convicted criminal Carson, that Harper had working for him? The RCMP just charged him, with influence peddling. Harper of course is denying he knew Carson was a criminal. Harper did know, and hired him anyway. 3/4 of Canadians, believe Harper used the robo-call cheat to win the election.

Harper is the master of, dirty politics and dirty tactics. He is using more dirty tactics, to get the robo-call investigation quashed. Harper has replaced William Corbett of Elections Canada, with one of his good old boys, Yves Corte. Same with the disputes over riding elections. Harper is appointing two new Conservative judges. Watch out for both of those, somewhat shady tactics.

Communist China's aggression all over the globe, makes a person wonder? Why is Harper selling China, control of the tar sands? Communist China has also hacked into other country's secret files. Seems it was a mistake for country's to buy their electronic components from China. The U.S. missiles and other weapons, had infected components in them, bought from Communist China.

Now, Christy Clark says she won't agree with, the Enbridge pipeline nor the dirty tar tankers, if Premier Redford doesn't give her money. However, the BC citizens, did not ask Premier Redford for money. Christy Clark did. The BC people, are more than happy for Premier Redford to keep her precious money and her, lethal chemical laced Bitumen to herself too. We asked for neither one. All of them can vacation at the tar sands, and like it.

hi Beijing...yes the Cons are so drunk with power they don't even care about appearances anymore. It's a depressing and disgusting sight, but I'm pretty sure that like the Mulroney Cons their crimes will catch up with them.
And yes it was a cute video wasn't it? If you thought that I started with the video and then wrote backwards, you might not be wrong... ;)

hi e.a.f...exactly. Power corrupts and in the case of the Cons absolute power corrupts absolutely. You'd think they'd know better than to act like drunken thieves, but of course they are Cons, so they can't help themselves. Sooner or later all Cons head for the trough. Which of course is great for us, because if we can tar the Cons with their own oily goodness, by the time the next election arrives they will be fatally weakened...

hi anonymous...as I told e.a.f., I'm surprised that Stephen Harper would blow his phony image as Mr Accountability in such a cheap manner. But like most smart criminals he thinks he can get away with ANYTHING. But of course they never do, and when they are caught, they never blame themselves. It's pathetic, but the day of justice will come...