Bill C-10, The Porker, and the Dancing Dog 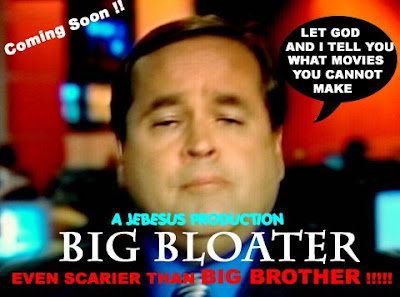 Imagine how horrified I was when I returned from my tropical hideaway, to discover that the sinister Cons had introduced a bill that would limit what movies we could make.

And that in a Globe interview, the porker homophobe Charles McVety was claiming the credit !!!

It sounded like a serious threat. Until McVety turned up at a committee hearing today. And had them rolling in the aisles....laughing at his klown show.

The awesome Kady O'Malley has the delicious details.

4:22:12 PM McVety quotes a Compas poll that he claims shows 80% of Canadians don't support funding naughty movies. Call me crazy, but I'd like to see the methodology. And the questions.

4:30:12 PM McVety, interestingly, is running far, far away from that unfortunate Globe interview where he was apparently misinterpreted into claiming credit for the bill, which he never, ever did.

4:32:04 PM Wilbur Moore picks up where Tkachuk left off. The Globe article, he says, noted that he had "discussions" with Minister Stockwell Day, and other officials. True or false?

And now, the dancing begins. Sure, McVety says, over the years, he's had discussions with lots of MPs, and ministers, and... "Was Stockwell Day one of those ministers," Moore interrupts. Eventually, McVety admits to "discussions" with Day, and Rushfeldt to similar "discussions" with Rob Nicholson.

4:37:45 PM Something you don't see every day: Charles McVety singing the praises of the Liberals, and Stéphane Dion, for supporting the bill in the first place. When reminded they've changed their mind, he sort of shrugs and says something about how Liberals change their mind on all sorts of things.

4:53:47 PM McVety is going on and on about the survey from Compas, which, as it turns out, to no one's surprise at all, was commissioned by... Focus on the Family. I do love how McVety pretends to have been surprised by the results.

5:18:34 PM Charles McVety just made my day by mixing up 'necrophilia' and 'necromancy' while condemning the decision to fund 'Kissed,' which was based on a Canadian novel and starred Molly Parker...

5:21:36 PM Having had a chance to look at the survey, the chair is now picking it apart...The exchange then descends into utter farce when McVety is forced to admit that the only way he got his poll to say what it did was by asking a ridiculous question like, "Should the government fund child pornography?"

Oh boy. May I humbly suggest that the next time the porker homophobe decides to take his klown act on the road.

That he take it to this talent show instead...

Wow that dog was AMAZING!!!!

But I'm confident our porker could do EVEN better.

Imagine him running backwards on his hind legs....like he did today. Or jumping through a hoop....and not making it. SPLAT.

While keeping up a steady stream of gibberish and shite. Oink. Oink. Jebesus. Jebesus.

LOL, I just posted something about this too, you beat me. While I was searching google for an image to use, I came across some of your old stuff -- mcvety pig on pig action!! hahahahahahaha!

The dog is so much better looking and I venture to say, is probably more trustworthy.

"Or jumping through a hoop....and not making it. SPLAT."

I love it! hillarious.

as for the video, i have seen it before but... meh. animals dont interest me. i like my korean dramas!

Did you catch the interview with McVety on The Hour? He's a complete idiot.

Hi JJ!! I read it and it's excellent. Hmmmm...and better than mine...as usual :(
As for McPig....I had forgotten about that one. The dum homophobe has always been a source of divine inspiration.
But I think my Mugabe Pig was better... :)

Hi Sassy!!! Yeah isn't that dog cute...and smart. They say border collies are the smartest dog in the world. I'd like to add except for mine...but sadly I can't. :)
As for trustworthy ...it's no contest.This is the second time McPig has had to back down from some statement claiming he tells the Cons what to do. Is he naturally modest? I doubt it. So I can only conclude he's trying to hide it. That at least will be the theme of my election campaign YouTubes !!! :)

Hi Graeme!! Yes I did. I stumbled upon it while doing some research for this post. And I must say George really did a number on him. Excellent. It's hard to believe that anyone listens to anything that dumbo has to say...

Hi Rashid!!! ...or how about jumping into the arms of his evil master Harpo at the end of the show.
And FLATTENING him !!!!
Squish.
Now as for you preferring Korean dramas to animals....and my amazing YouTubes about them...that sounds SERIOUS.
If I were you I would seek help immediately!! :)

McVety's greenhouse gas emissions - beginning with the bullshit he spews - are only made worse by his weight. What a cake-holed 'tard.