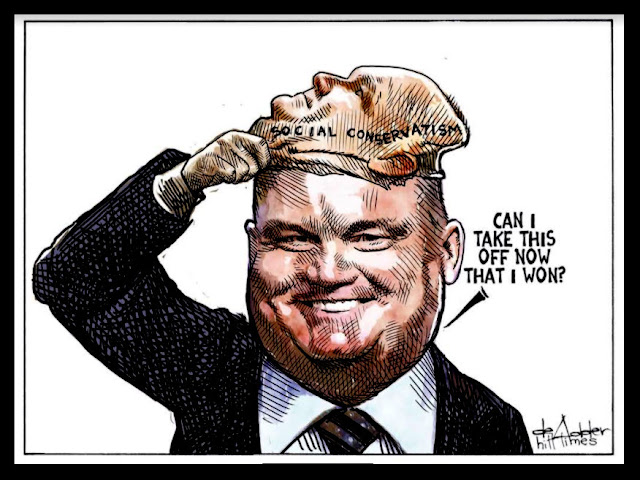 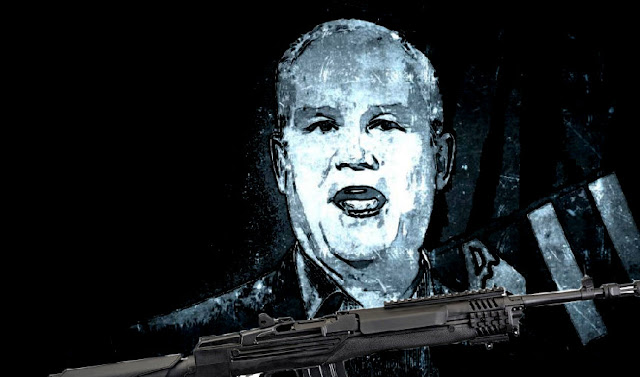 And his most dangerous.

Conservative Leader Erin O'Toole is reversing course on a platform promise to overturn a ban on some 1,500 makes and models of what the government describes as "military-grade weapons."

Speaking to reporters on Sunday, O'Toole said that the ban will now remain in place under a Conservative government while a public review of the firearm classification system is conducted.

For first he vowed he was going to repeal the Liberal government's ban on assault-style weapons, because he was the gun lobby's best friend. 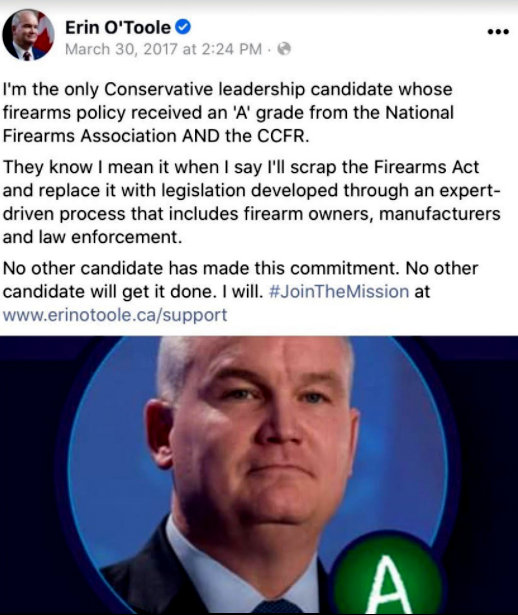 Then during the debate he claimed he had dropped that promise.

Only to have Justin Trudeau point out it was on page 90 of the Con campaign platform...

We will continue to invest in keeping our communities safe – Conservatives want to legalize assault rifles. The choice is clear. #ForwardForEveryone #FaceaFaceTVA #cdnpoli @JustinTrudeau pic.twitter.com/tZXzqy6y9z

And now after promising he wouldn't repeal the ban, he's flip flopping again, like a freshly caught fish in the bottom of a boat.

And he's not ruling out repealing the ban. Again.

Conservative Leader Erin O’Toole appears not to be closing the door to future reclassification of some 1,500 firearms — largely semi-automatic rifles — prohibited under a 2020 Liberal executive order.

And all I can say is that the ghastly O'Toole must be in the pockets of the gun lobby, as well as those of Big Oil.

The far right extremists must be telling him where to go. 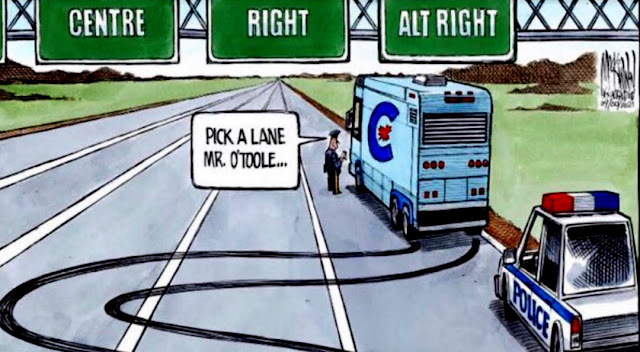 And what decent Canadian could trust a man who flip flops as much as he does?

It's disgusting but it does give me an idea.

Maybe we should put on fancy dress fish masks, and follow him wherever he goes, flipping and flopping our heads from side to side to warn others he can't be trusted. 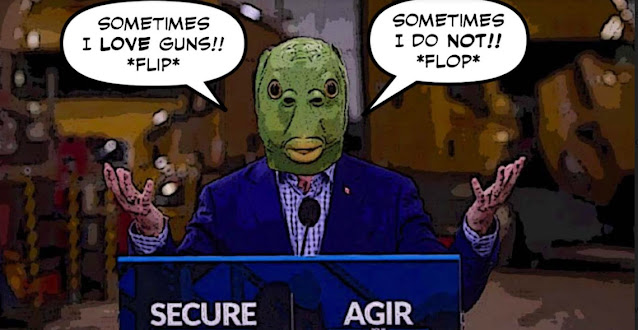 And to let him, and the Con media know what we think of him.

He's a flipper, he's a flopper, he's corrupting our election.

Let's give that Con clown the hook, before he steals our country....

What Trudeau needs to do is to call out the rock-throwing mob and tell every Canadian that Tool wants them to have assault weapons. In that crowd somewhere is an Oswald waiting to happen. The Con media would delight in it despite giving Justin Fitzgerald Kennedy's assassination virtually no coverage at all.

Who says debates don't matter? It's been five days and Tool has yet to come up with a cogent response to something he was called out on FIVE DAYS AGO at TVA. Even Akin and Kinsella have had no choice but to give Trudeau and the Liberals props for hammering him on his prevaricating. Kinsella went so far as to write an ad for him. Nobody likes these weapons of war besides the frothing unhinged base.

But the real shame is Singh who continues to remain silent on the violence against Trudeau, and the NDP's willingness to support a CPC minority. They'd let Tool put machine guns in the hands of maniacs just to score a few seats and dunk on or oust Trudeau.

This lying leprechaun with a shit eating grin and his gun-crazy fanatic cadre must never be allowed anywhere near the PMO. Ever.

Gotcha moment, I got one. So the cons are talking up liberal inflation. So with your books packed and loaded, ask the Tool, what liberal policies have created inflation? What would you have done differently, and then the blow to the head, inflation has not been caused by monetary policy but by external forces mostly commodity and chip prices. Fuck you tool take the fetal position till the election is over.
Gotcha on Guns
Gotcha on two tier medicine
Gotcha on being a serial pander bear.

I don't think he's flip flopping. He's a full knuckledrager : anti women, pro gun crime, racist, homophobic and anti labour . He's not a flip flopper; the polls have made him careless and he forgot to lie this time.

This morning two polls, one rolling and one conventional showed a drop for the reformatories, just like predictions. Maybe the real race is indeed starting after labourvday.

Looks like he's gaming the election from the Ottawa studio! He won't answer critical questions because he only opens the data mining channels to friendlies who push his propaganda!

Aw man, the English debate is gonna SUCK. Fungus Reid's chief pollster, Evan the art thief and Pentagon Barbie are going to "moderate" a WWE melee where no one's message gets out.

All I can say of Trudeau's valiant effort is that at least he hasn't been a coward. He's faced those goons and taken it on the chin. Literally. Pathetic that the garbage media have conned voters into rewarding such a yellow-bellied chickenshit. Always the navigator, never the Top Gun.

So let me get this straight, those tories gunlovers who would nervously shit in their pants when Trudeau quoted section 90 of the conservative platform but would not have a conscience is exepcting that the winning ridings of Toronto and Quebec would join THEIR crusade when in fact they might think that these undecided voters would buy themselves a gun to fend for themselves. As if these winning voters who had other issues in mind would give a conservative majority that would please the gun lobby mostly while all the important limboing liberals policies would just get flushed in a snap (don't get me started with their trade offs with the opposition when they had their four year majority). By hoping I was clear.

Hi Jackie...Trudeau definitely needs to provoke those deranged zombies, because the more they howl the more we win. He also needs to portray them as the kissing cousins of the Trumplings in the U.S. They look like them and sound like them, so he might as well go all the way. Unfortunately there's another complication, many of the zombies are clearly suffering from mental illness. The Con data divers were the first to come across that phenomenon, although anyone who works in a hospital could have figured that out a lot more cheaply. But O'Toole has been hammering home relief for the mentally ill, and I'm sure it has contributed to the rise in his polls. The Liberals have responded but they need to do better....

Hi Steve...the Tool has yet to cost his promises, and unless he does before Thursday, Trudeau should hammer him on that and accuse him of taking a page out of the Trump playbook and you know what happened to him...

Hi Rumleyfips...I suppose you're right. You have to believe in something before you can be accused of flip flopping. But it is a convenient label for O'Toole, as I mentioned in my post, for if you can be accused of serial flip flopping, it's hard to trust anything he says. Which needless to say I don't. And I am encouraged that the polls seem to be signalling that he has reached the end of his magic carpet ride, and the only place he can go now is down...

I think I know why Erin O'Flipflop hides in his Ottawa propaganda studio bubble of babble and delusion. He is an actual fish that can't stay out of his aquarium for very long. But he's not just any fish. He's a Flounder. The proof is undeniable. They're found at the BOTTOM of oceans and they're able to camouflage themselves as whatever to fool their prey into falling into their trap. They ambush their prey. However, like any fish, when they're out of the water, they will flip-flop all over the place. Let's hope that this Flounder is soon floundering at the polls when Canadians en masse realize he's a bottom feeding shit bag that cannot be trusted because if he were somehow able to win, it would determine the type of Flounder that he is, a Fluke.
While I am attempting to add some levity to these times of uncertainty, I would like to once again provide a free public service announcement to the sane family members of the anti-vaxing/anti-masking/anti-reality/Ivermectin chomping/bleach drinking crowd who are smart enough to follow the science. Please, do the world and future generations a huge favor by having your covidiots spayed or neutered ASAP.
JD

Hi Myworld1916....The gun lobby is such a big part of O'Toole's right wing coalition that he cannot afford to lose it. Even if that means the tail ends up wagging the dog. There is no threat to people like farmers and hunters, but the gun lobby depends on scaring them into believing that all their weapons will be confiscated by the wicked Liberals. Also, the movement is very strongly influenced by the NRA in the U.S. and they're total fascists. So we're at a very dangerous moment in Canadian history, we could lose a lot of the things we value, and if our media wasn't so right wing that would be obvious...

Back to the doldrums on the polling front this morning. I'm so sad. I'm not even sure the debates will change much at this point. People are taking out their anger at Trudeau.

He's going to be a wreck and so will Canada. I'm heartbroken. 😢 💔

National Post is publishing all of its election propaganda as if it were news rather than labelling it as opinion. This is clearly against ethics rules in journalism but unlikely illegal. What is illegal is the 100% anti Trudeau / pro Tool bias amounts to free advertising propaganda inside the writ period. Elections Canada should be compelled to investigate and although I am sure they would not be able to prove collusion it is easy to show the Post is presenting one sided opinion disguised as news. That fact alone should be enough to shut them down as they are the only news organization behaving in this manner. Perhaps the others slant the news by selecting what they present but they do not use 10% news augmented with 90% propaganda. News is what happened not an interpretation of what happened with a heaping pile of bull shit opinion. The cheating is hiding in plain sight!

Hi JD….I really enjoyed your comment, and the flounder had me gasping for air I was laughing so much. I realize that the Cons are threatening to gut this country, but we need a little levity to get us to the finishing line. The Cons and the Con media are trying to demoralize us, it’s psychological warfare on a massive scale. They are showing us they are fascists not only with their miserable policies, but also by the way they are behaving. Attacking the decent Justin Trudeau, beating up Liberal canvasers, and destroying Liberal campaign signs all over the country. The police need to raise their game and start arresting and jailing those maniacs…

Hi RT….The National Post is a disgusting American owned rag. I took a look at it’s front page today and it’s featured columnist wasvRex Murphy, the ghastly oil pimp, which tells you all you need to know. When the election is over we need to organize a mass boycott to try to drive some of those Postmedia garbage papers out of business. Like you I think a complaint should be filed against those ugly Cons, it probably wouldn’t go anywhere, but it might alert a lot of Canadians to the presence of the alien monster in their midst…