How The Cons Are Trying To Steal The Election 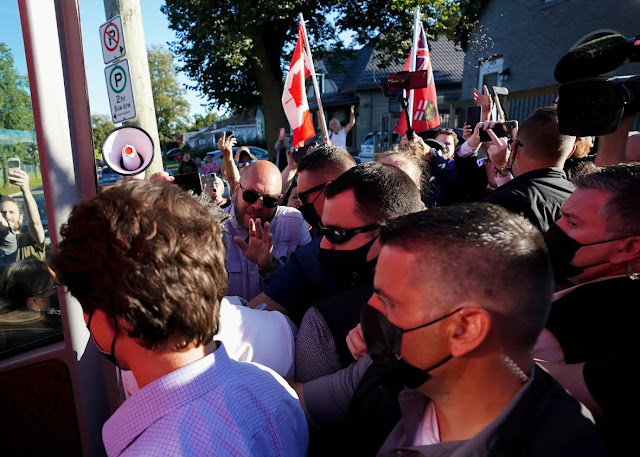 Ever since the campaign began the Cons have been trying to drown out Justin Trudeau's message to Canadians, anyway they can.

They have directed their monstrous supporters to try to disrupt his rallies, and threaten his life.

With the help of the shabby Con media they they have tried to smear him with one fake scandal after the other.

And now they're attacking him with one of their deadliest weapons. 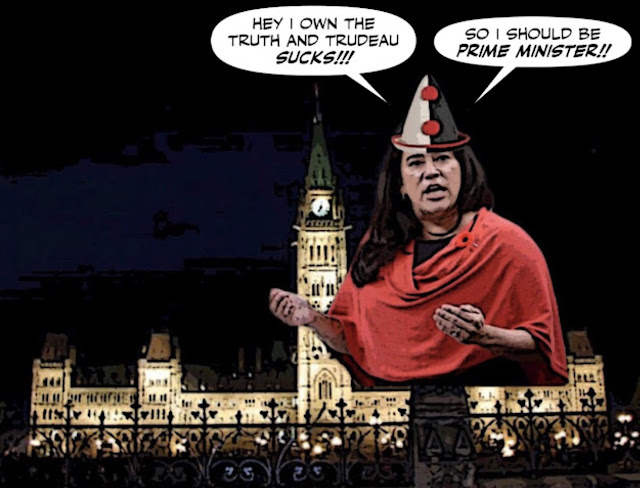 Or one of the most absurd ones, Jody Wilson-Raybould!!!

Who has come back, to flog her new book, and try to make the election campaign all about Jody.

The full story of what happened in the SNC-Lavalin affair has yet to be told, says former justice minister Jody Wilson-Raybould in a scathing new book recounting her time in Prime Minister Justin Trudeau's government.

In "Indian in the Cabinet, Speaking Truth to Power, Wilson Raybould suggests that while the Trudeau government has considered the question closed, the SNC-Lavalin affair may not be over.

Trying to smear the decent Justin Trudeau. Again. Like only she can.

In February 2019, she said, Trudeau suggested that his office was telling the truth about the SNC-Lavalin affair and her office wasn't. "In that moment I know he wanted me to lie – to attest that what had occurred had not occurred."
When the truth is she was a lousy Justice Minister and Attorney General, and the woman who would portray herself as some kind of secular saint, is driven only by her burning ambition and her monstrous ego.
So she can't seem to understand that the fake SNC-Lavalin scandal ended like this, years ago...

Did the PM, the clerk or the PMO ever direct you to enter into a remediation agreement with #SNCLavalin?

And Wilson Raybould's attempt to regurgitate it, with the help of the adoring Con media, is preventing Trudeau from outlining his policy proposals to Canadians on such important issues as childcare, women's rights, and climate change.
Which couldn't be more disgraceful.
But then the Cons have been disrupting and trying to drown out Justin Trudeau's message for a long time. 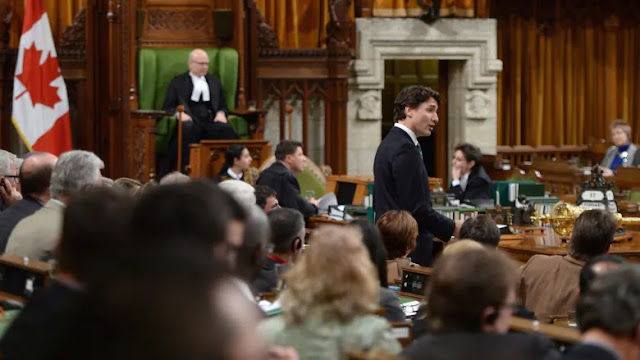 They forced him to call an election by turning the Commons into a toxic sewer, where almost every bill was stalled for MONTHS, including the budget implementation bill, and the country was rendered practically ungovernable.
And now they they are using the same tactics to try to win the election.
So instead of being able to talk about the massive challenges we face, Trudeau is being forced by our crappy media to answer one absurd question after the other about St Jody?
It makes no sense, it's madness, but make no mistake it is deliberate.
The Con's foreign advisers used the same techniques to win the Brexit referendum, and give the grotesque Boris Johnson a majority. 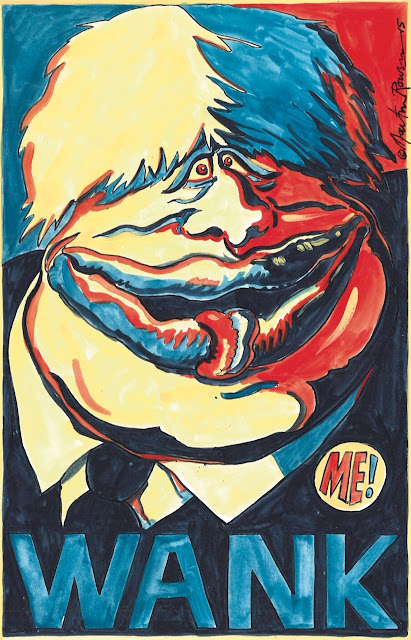 By making people believe that the old wanker with fascist tendencies is really a nice guy.
You know, the last thing I remember reading about Jody Wilson-Raybould, before she returned to play her part in trying to destabilize Justin Trudeau, the Speaker of the Commons was threatening to evict her from a minister's office that she no longer had the right to occupy.
If it comes down to it, newly elected House of Commons Speaker Anthony Rota says he will evict Jody Wilson-Raybould, the Independent MP currently locked in a dispute over office space with her former party.
Wilson-Raybould, an Independent MP who resigned from cabinet over the SNC-Lavalin affair, has been refusing to move out of the entire office space assigned to her in 2018, when she was a cabinet minister.
Can you believe it?
She wanted a minister-sized office with a private washroom, even though she's only an independent MP. 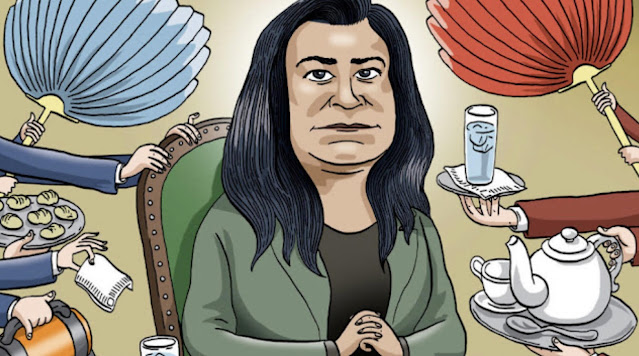 Doesn't that say everything about Jody Wilson-Raybould?
Nothing is EVER big enough for her.
Thank goodness a compromise was finally worked out... 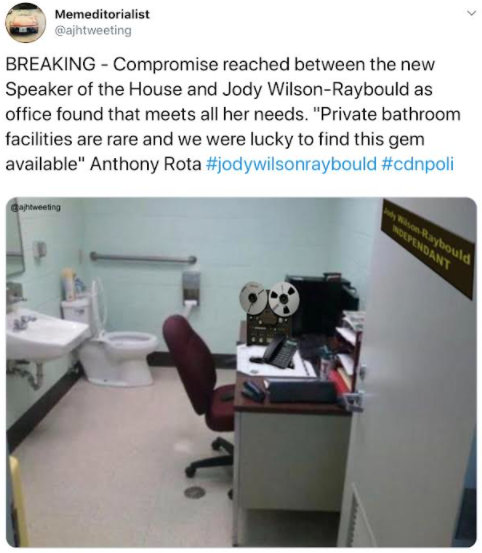 And one can only hope that she can be flushed out of what's left of this election campaign, before she debases it further.
Forget her, ignore her, she's nothing but a Con tool.
And her time is long over....
Posted by Simon at 3:08 PM

Fife etc are trying so hard now to get an RCMP "investigation" going so they can derail Trudeau's campaign like Martin was derailed in 2006. Its really pathetic.
JWR could have been one of Canada's great justice ministers but she just didn't have what it takes. I was impressed that Trudeau expressed a great deal of humility when he talked about how regretful he was about everything that had happened - unfortunately, JWR isn't worth it.

Jamie Carroll wrote this about Judas W-R and it couldn't be more apropos. That's me under the comments adding a few bits about WK's role and the Wilson/Trudeau family feud. If Canada had actual journalists there'd have been a deep dive into this.

Not to mention the red herring aspect of the SNC "issue" being something that would catch the Ottawa bubble's attention, a lot more so than her clashes with Bennett over wanting to take full control of the Reconciliation file. And what of her husband being a scion of the Fraser Institute? Trudeau's team really should have done better vetting. He probably wouldn't have even had to suffer this minority parliament were it not for JWR and her public tantrum that she's now trying to milk. Her 15 minutes were over two years ago.

Tool says if he forms government he'll lift cabinet confidences and "let her speak." Except, he can't do that for a previous government and he knows it. He's trying to get Max voters back by going full Trump i.e. "Lock Her Up."

I'm at a point where I'm convinced lawyers should be banned from politics, because lying is central to their profession. Him, JWR and Singh are among the most duplicitous, gaslighting bullshit artists I've seen in public life. Dante's Inferno placed them at the very bottom of the ninth circle of hell, and that's exactly where that stinging bee itch belongs for all the trouble she's caused. I wouldn't hire her to work on a case at traffic court.

The foolfromthehill blog sums it up better but I reached essentially the same conclusions after review of data some 2 years after the fact. Lobbyists convinced the Trudeau government they needed to save jobs and the DPA solution that was already being used in other western countries seemed a solution. Nothing illegal, just a government trying to keep Canadian jobs in a very competitive global market. Inexperience combined with JWR's personality and Con media propaganda turned the whole affair into a episode straight from the Keystone Cops. The DPA that became law required a judge to review the request and approve only if the offending company had been upfront about their wrong doing before being found out. Naturally the judge refused the SNC request and no one was stupid enough to tell JWR to override the judges decision although it was likely some were very disappointed that she bungled the file so badly. Was the effort bungled or sabotaged rather than be upfront and resign in disagreement if necessary. In either case Jody was quite capable of scoring in her own net if it suited her!
After all the drama it turns out SNC was quite capable of looking after themselves. SNC Construction paid a hefty fine, in response SNC Group shifted focus away from its construction company to engineering services that were unaffected by the legal action. Life goes on, SNC survived and thanks to Harper the group has control over Canadian nuclear technology in addition to other lucrative contracts. Trudeau learned from the experience and is likely a better leader for it, Jody is still Jody but true Cons hubby and associates seem determined to convince the leaders of various native groups to sell out their heritage in exchange for monetary trinkets. The circle completes as the Tool has promised billions to facilitate the resource sell out if elected.
Hopefully with enough resistance at some point the media fuelled propaganda machine will self destruct and real journalism will rise out of the ashes.

It's bad enough I have to listen to Con ad crap all day long on TV and radio, endless Maxime Bernier ads from a guy who needs expert psychiatric attention, and even crap ads here in Halifax for Yves Blanchet, Canadian traitor and Bloc Quebecois dumbo, but now the liberal Dorkus Maximus crowd is trying to smear JWR and turn Twinkletoes into an angel with with a super big halo.

Did this or did this not occur? Huh, well did it?

The Ethics Commissioner found in August 2019 that Trudeau violated the Conflict of Interest Act by improperly using his position to pressure Wilson-Raybould to benefit SNC-Lavalin's private interests.

It did occur. So is the Ethics Commissioner full of crap too? So stop the crap bullshit, you guys. You're full of it. Wah. Did the truth hurt?

Actually Bill, it was Jody herself who pointed to the ethics commissioner's crap level when shw admitted that noone ever asked her to lie.

Hi Cathie….Yes, the JWR story is a sad and pathetic one. She could have worked her way to the top, but she seemed to think that she should go right to Prime Minister. I blame her father and the media for creating those unrealistic expectations, but ultimately she was the one who became obsessed with toppling Trudeau, so she’ll get no sympathy from me. She has become a terribly toxic force and a tool of the Cons, and deserves to slowly fade to black. OK not so slowly….

Hi Jackie…..Thanks for the link to that brilliant Jamie Carrol story, which I greatly enjoyed, along with your equally brilliant comment. The way our hideous media distorted the facts, and turned JWR into some kind of martyr, is inexcusable and unforgivable. And now Bob Fife is at it again trying to use her to get at Justin Trudeau again. Both of them should be ashamed of themselves….

Hi RT…Another brilliant comment. The amount of time that was wasted on JWR and her machinations was appalling, and displaced many more pressing issues. It was a smear job from start to finish, and JWR and the media disgraced themselves.Period. St Jody may still think that she was born to lead us, but I suspect that most Canadians are sick of her, and would dearly like to see her disappear into the oblivion she so rightly deserves….

Hi Bill….No, the truth does not hurt me, but it should hurt you for being such a dumb old fart who would believe everything that Con artist tells you. Please read what Jamie Carroll had to say about her:

You have so much to learn and so little time. Good luck !!!