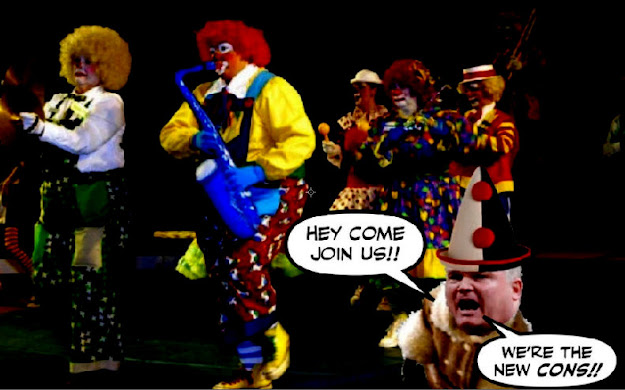 It's an absolute freak show. A real fascist circus, where Erin O'Toole tries to fool Canadians into believing that he's really a nice guy.

While the Con clowns in the media lick him like a lollipop, and would have us believe that he's not just a nice guy, he's also compassionate.

When in fact he is neither. 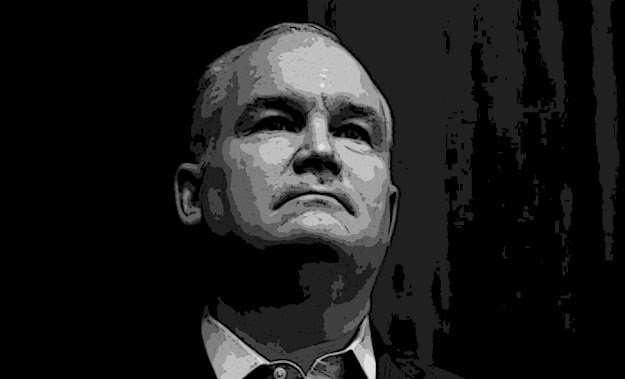 He's a brutish opportunist who craved power so much he pandered to right-wing extremists and SoCon bigots, who used their convention votes to elect him leader.

They are now a big part of his "government in waiting."

Or his shadow cabinet from hell... 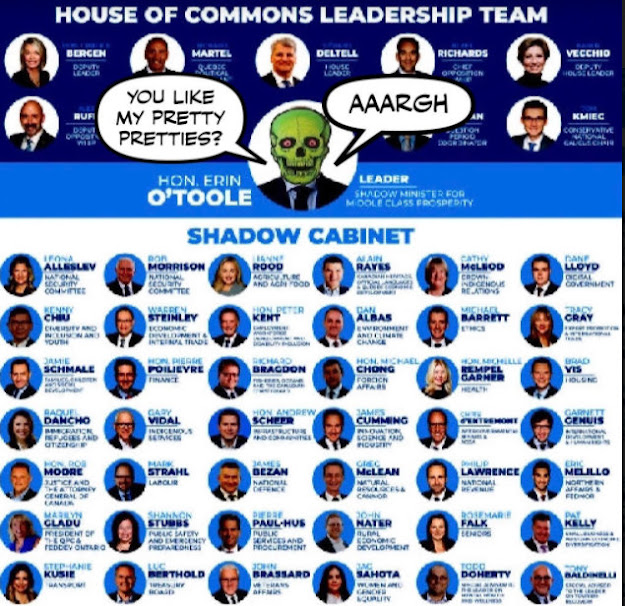 Which is so big in order to fit in all those SoCons, there are more Con shadow ministers than Liberal ministers.

So as I said on Twitter, O'Toole's "compassionate' Conservatism is just a scam. 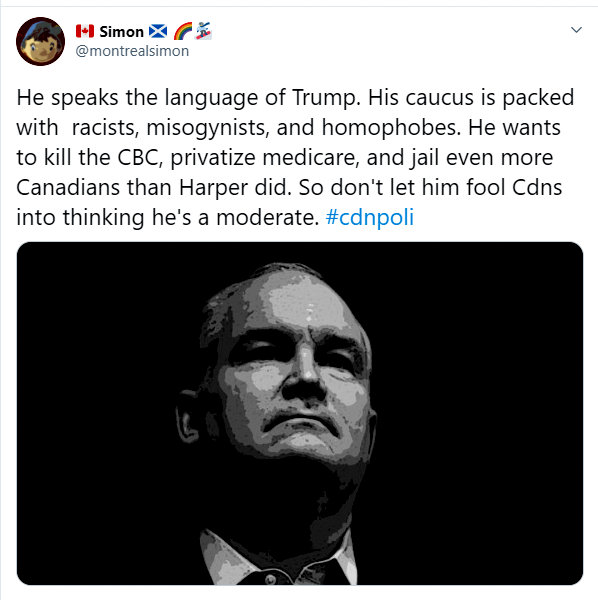 And nothing demonstrates his extremism and his mediocrity more than his appointment of Michelle Rempel as his shadow Health Minister.

Even though Rempel has just finished organizing a petition to try to scrap government legislation banning assault weapons.

Can you believe it? Nurse Rempel with an AR-15? 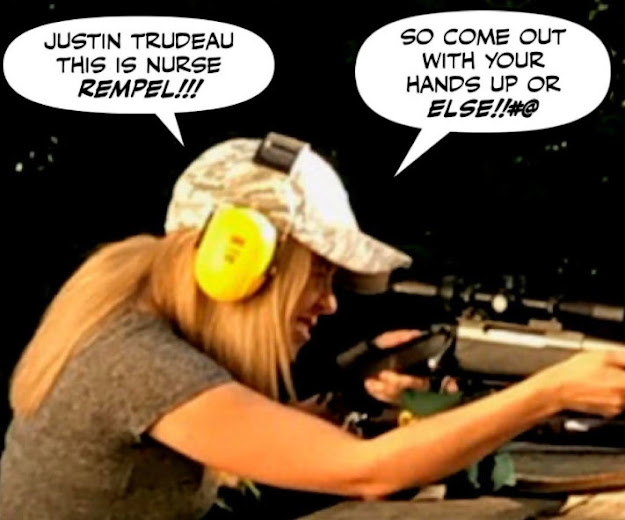 Or how about Nurse Rempel trying to convince young Canadians not to drink so much? 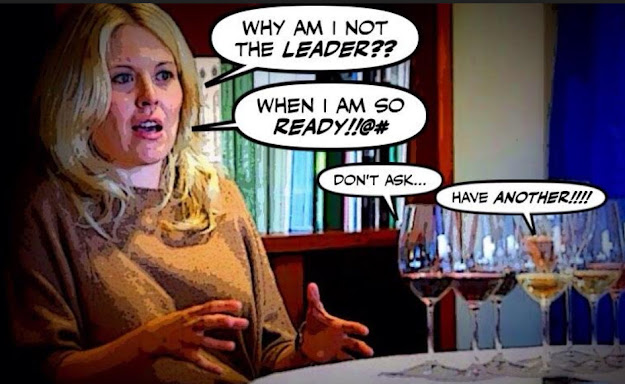 Yes, that's what I thought.

It's like making an anti-LGBT bigot the shadow Minister of Diversity.

The appointment of an MP to the Conservative shadow cabinet Tuesday is being met with calls for his resignation.

Steveston-Richmond MP Kenny Chiu has been given the diversity, inclusion and youth file, even though he once sat on the board of the Columbia Bible College in Abbotsford that deemed homosexual activities inappropriate.

As only a grubby Con could.

But then of course the only reason Rempel was made Shadow Health Minister was because she hates JustinTrudeau so much.

A hatred that can go from bad to worse, the more plonk she drinks.

So much so that it can only be matched by the toxic Trudeau hate of the Cons new Deputy Leader Candice Bergen.

Whose hatred of Trudeau is also so visceral, and so Trump-like, it's scary.

But then they're all like that. They all want to avenge their failed Great Leader Stephen Harper.

And Erin O'Toole is no different.

He needs Harper to help hold his party of far right extremists, religious fanatics, and Trump supporters together.

And that makes him Harper's puppet... 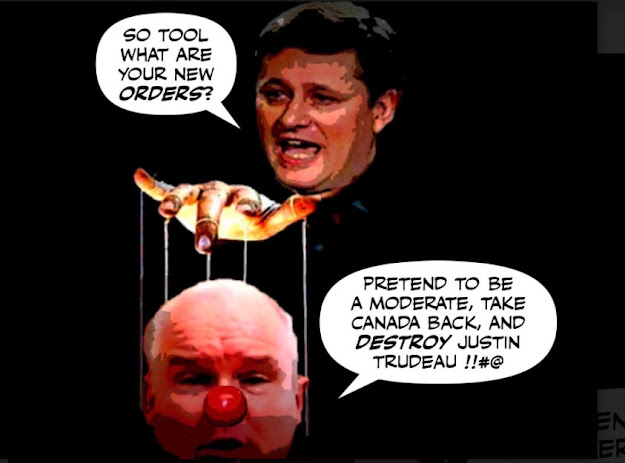 O'Toole can try to claim that him and his bigot Cons are now born again moderates.

But when you sound like Trump, and your platform looks as it was written by Harper.

And you have a shadow cabinet from hell.

No decent Canadians should believe him...

Not only is his shadowy cabal not getting much ink the punditocracy is ignoring WE's announcement.

It looks like Trudeau was not given a headsup by the Klienburgers. The WE bros and Justin don't seem to share much information.

The WE bros and Justin don't seem to share much information.

Almost like they weren't actually "friends" being "rewarded" isn't it. SMH.

Rumleyfips, when you say the punditocracy is ignoring WE's announcement, what announcement do you mean? That there isn't much coverage of the closing up shop story right now, or something else they're missing that's vindicating/mitigating for Trudeau?

As to O'Trump's shadowy cabinet: I would still hope that the LPC war room is keeping their powder dry for an actual writ period when people are paying attention to a campaign, to drop info bombs on all of them. Which is what they did with Scheer after the media polished his knob for so long. That being said, I also had high hopes for the fake scandal to finally be dead, but now I'm really pissed with the K-bros for pulling the trigger on their organization and thus lobbing a grenade at the government. Covering their ass at all costs.

I hope Trudeau, and Canada survive this and that it's not too late for the throne speech to change direction. Though if he does quit in protest to avoid Canada being subjected to a fate of misery by this Kudatah Klown Kabal of Aryan O'Trump's, I hope he'll gather a good legal team and file suit against all those responsible for reputational damage. Starting with Jesse Brown.

How nice of the Con media to fluff and buff Errand the Tool and his mishmash of Harper failures and up coming Reforma-Con-a-wannabes. If I was any more underwhelmed I may be declared legally dead. This freak show troupe the tool has assembled cannot EVER be allowed to run this country into the ground. It's 2020 but it looks like 2013 in the Con world of regurgitated losers.
In spite of the Con media's attempts to slather lipstick on this pork rendering plant, anyone with half a brain will see the same old ugly politics of the Harper party. The tool has already found Andy's old broken records and projectors in the Stornoway trash bin and is gleefully replaying the same old divisive, fact deprived bullshit again.
Michelle "Annie Okley-Homey" Rempel as health critic? It's a joke, right? PP as finance critic? How will he find the time when all he does is run around pulling his WEWE all day. The only degrees he has are on his thermometer. Did he even get his grade 12 before Harper developed a sweet spot for him? It will be sweet to watch Chrystia destroy him in QP and the little snot will get the comeuppance he so rightly deserves.
It's here we go again, Simon. We need to keep shining the light on who these assholes really are because with the exception of a few, the Con media certainly wont do it. After two losses they're desperate for a win to please the corporate masters and to return to the glory days of fully laden pork barrel politics as only the Cons can do.
JD

I am still working on my org chart mapping the connections of the Canadian (North American/transnational) right wing disinformation sphere but the following article should shine some much needed light.

Canada's "free" press is a Con echo chamber and you have to go outside the country to U.S. nonprofit anti-hate researchers to uncover the truth. Although in light of recent events I take exception to this piece characterizing CanadaLand as a "news" site. Pathetic that they moved so far from media criticism because now it's basically Jesse's vanity project, that he used to launch his hit job taking down WE with the Trudeau family/Liberal government as collateral damage. A dirtbag-left version of Postmillennial or Rebel.

I mention Postmillennial because that article has them in the spotlight this week on Right Wing Watch. Andy Ngo is editor in chief of Postmillennial and he is mentioned in the piece. Spoiler alert, he is one nasty bastard. Jeff is courting actual violent Nazis with his propaganda outlet and therefore so is O'Toole. With the toxic troll Scheer set to face off against McKenna at Infrastructure, and the violent QAnon/Proud base convinced that WE Charity is a front for Trudeau to groom children, I can't see this ending well at all.

The Tool can blow all the smoke he wants but ultimately cannot hide the fact that 40% of his MP's are biblically inspired anti abortion activists while only 10% are verified supporters of free choice and the LGBT community. The remaining 50% are in the grey area where their values are either unknown/hidden or considered not quite there yet but educable with some work. For a trip down a vicious rabbit hole don a full body & mind PPE suit and go to www.campaignlifecoalition/voting-records/viewlist/level/mp

The Tool has to keep these anti science, anti modern society missionaries hidden if he has any chance of forming the next government. As such he has to run a campaign of emotional distraction on hot buttons such as corruption, foreign boogeymen,immigration,crime and outdated views about the road to prosperity. Its a tall order and without the support of major "news" outlets would be impossible. These are vicious biblical missionaries that will not sit quietly in a closet so he has to cover the whole political landscape with a very thick divisive smoke to keep them hidden. Will the other political parties take the bait or shine a light into the closet?

Although nurse Rempel with an AK 47 is somewhat wacky remember what they say about the enemy of my enemy is a friend. The coalition has her pegged as a red light..."Ms. Rempel put her liberalism on full display, agreeing to be the keynote speaker at a fundraising event for LGBTory, a homosexualist agitation group within Conservative party circles that aims to undermine socially conservative policies with a radical homosexualist agenda. The fundraiser, billed as an opportunity to meet "real live gay" Conservatives, was to raise money to fund LGBTory members marching in Toronto's 2016 extremely lewd, homosexual Pride parade".

Hi rumleyfips....I can't even talk about the WE affair, without feeling like vomiting. In my opinion it's just another example of Canada's tragic tall poppy syndrome. The organization had become a little too corporate for me. But it inspired thousands and thousands of young Canadians to think of how to contribute to progressive causes, and nobody ever gave a damn about them...

Hi Jackie...despite what I told rumleyfips, I don't blame the Kielburgers for what happened to their organization. It was murdered by the Cons and the Con media. And despite what Poilievre and the other filthy Cons are trying to suggest, the death of WE will be seen as a tragedy by most decent Canadians, and using it to try to smear the Liberals further, will be seen as the equivalent of trying to screw a corpse. Welcome to the necrophilia Cons...

Hi JD....I'm afraid you're right. We can't expect anything from the Con media, they are now totally bought by big business and the oil industry. They are trying to make O'Toole look like a nice guy, but the way he won the Con leadership race will come back to haunt him. And although the Covid summer has totally exhausted me, I'm ready to join you and other decent Canadians in burying those filthy zombies once and for all....

Hi Jackie@4:11 pm...Yes, I read that right-wing watch article, and I it only confirmed what I think about that Post Millennial rag. And like you I wonder why our Con media has never exposed the right-wing conspiracy in our midst. But that's what we are for I guess, and I for one look forward to the challenge, as I'm sure you do too...

Hi Steve...I have always believed that Harper favoured O'Toole, if only because he was afraid that Peter MacKay might take the party back to where it was before he fooled him into selling the Progressive Conservatives to him and his ghastly reformers. I don't think he had anything to fear, but I don't doubt that O'Toole will be his willing tool...

Hi RT...I spend a lot of time checking out the Campaign Life website. So I'm glad to see I'm not the only one. But you're right, not only are there all the candidates the kooks at Campaign Life approve of, there are many others who they believe are "educable." And there are far too many bigots and misogynists for O'Toole to keep under cover. The problem is we might have an election sooner rather than later so we have to work hard, well, and fast....

"AR-15 Barbie" as Minister of Health