Erin O'Toole's Fraudulent Make Over and the Killer Cons 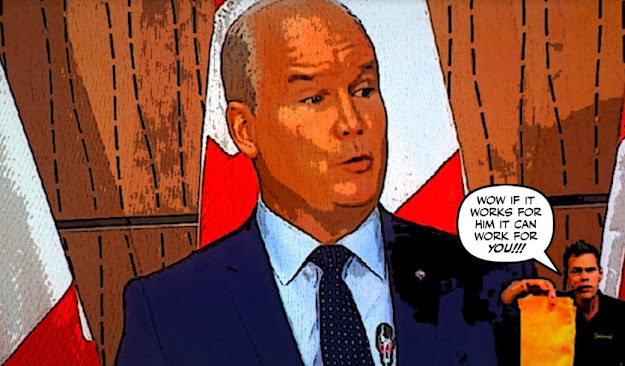 It's a truly disgusting spectacle.The Cons and their shabby stooge media are going all out to try to portray Erin O'Toole as a really nice guy.
With some in the Con media so desperate to make him look good, it won't be long before they whip out their ShamWows and start polishing his shiny bald head.

But of course, they can't fool me, because I know that O'Toole is not what he wants to make us believe.

He's a shameless opportunist, a third-rate Trump impersonator, who likes or liked to be called True Blue O'Toole. 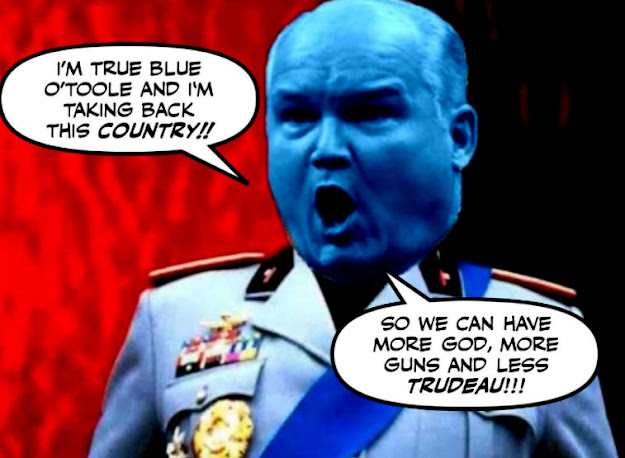 And True Blue wants to take Canada back. Back to the days when he was Stephen Harper's faithful stooge.

Which explains why he wants to dismember everything that helps make Canada the country we love.

From our medicare system that he is promising to privatize.

To the CBC that he has vowed to kill... 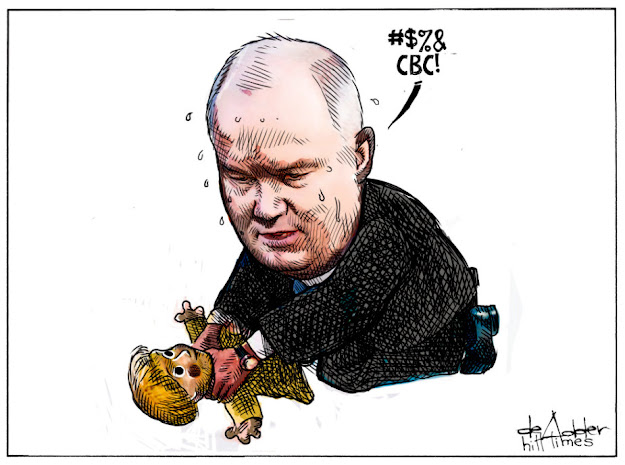 But if you want to get a good idea of how far to the right True Blue would take this country, all you need to do is check out his law and order platform.

Erin O'Toole's law and order platform reeks of fascism. And by bending over backwards to try to portray him as a moderate, our shabby media is betraying this country and its values. Shame on them, and wake up Canada. https://t.co/wEQk5MGHHg#cdnpoli

And then there's the damage True Blue would do the human rights of women and LGBT Canadians, just to pleasure the many far-right extremists and SoCons who elected him leader.
SoCon bigots like Derek Sloan... 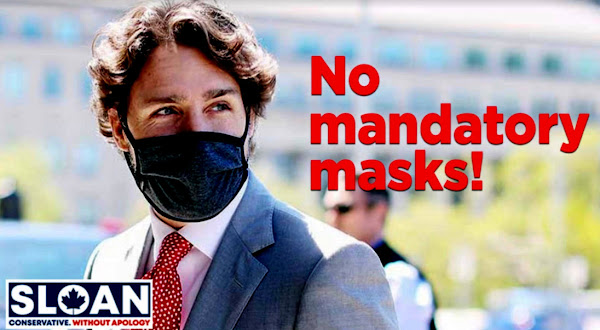 Who isn't just a racist, a misogynist, and a homophobe. He's also trying to undermine the fight against Covid-19
Like so many other Con Covidiots.
New Conservative Leader Erin O’Toole has lots to do. He should start by convincing Canadians his party’s supporters aren’t going to kill them.
An Angus Reid poll looked at how people are responding to COVID-19. It found many Conservative supporters — way more than people from other parties — don’t care much about science, expert advice or their vulnerable neighbours.
And because of their behaviour, people will die.
For that's who they are. First they'll kill the old and the vulnerable, and then they'll kill our country. And True Blue either agrees with them, or is too cowardly to stop them.
So don't let our shabby media fool Canadians into believing that O'Toole is a moderate, for he most certainly isn't.

He's a third rate Trump impersonator.
And a Harper clown... 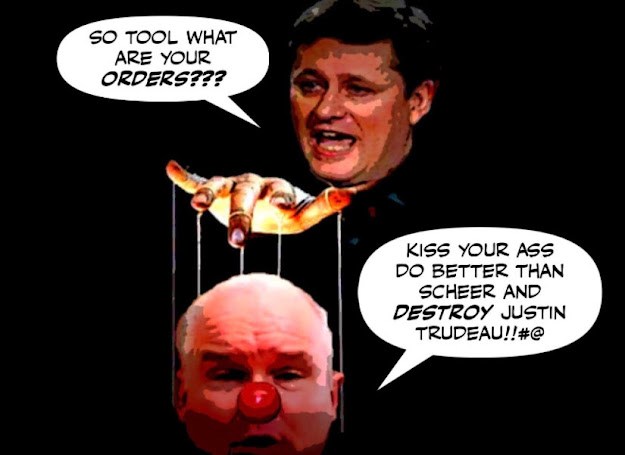 And while he is just a pathetic stooge.
In a time like this one, he couldn't be more dangerous...
Posted by Simon at 2:28 PM

I'm worried about the media gaslighting too, because I recognize it so well from 2016. But I try to keep reminding myself that for all the baggage and smear campaigns, Trudeau is not as vehemently despised as Hillary Clinton, even though a lot of the attacks and fake scandals are Xerox copies of Clinton derangement syndrome. But the media polished Scheer's knob for two years to maintain "balance" before the Liberals annihilated him during the actual campaign.

I would ignore any and all polls from now until September 23rd if not shortly afterwards. Campaigns still matter. I think we'll have a better direction of where things are going once the throne speech comes down. I also have a suspicion that election fever is the next "wave" to hit the continent, and that both our countries could be at the polls before Christmas. New Brunswick votes in a week. P.E.I. is said to be gearing up. So are Horgan in B.C. and Kenney's stooge Moe in SK. Trudeau is holding a virtual fundraiser/town hall this week, which tells me the Liberals are getting the war chest ready for something big. Chantal Hebert mentioning the N.B. election as a harbinger to watch tells me Quito Maggi of Mainstreet might be onto something, because he was the one who brought that up first.

The red machine is keeping their powder dry. They know the media is stacked against them, which is why Papa used to say to "talk over the heads" of the opposition and the feckless MSM and go directly to the people. The Liberals haven't forgotten about Sloan, about Findlay, or the "free votes in caucus" weasel words about abortion. They no doubt have O'Toole's entire leadership campaign on their hard drives. His "recovery" plan is going to be austerity with a smile. Not to mention, Kenney could end up serving the same purpose as Ford did with Scheer, if Trudeau decides to "campaign against the premiers".

I will grant that O'Toole is a better bluffing bag of blarney than Scheer was, and he has the full apparatus of the Canadian MSM in his corner doing pro bono PR. But the fighting Irishman will still have to go up against the prize fighter from Papineau who also has some very good people on his team (namely, the Biden/Harris crew, which is why the messaging is so similar). The ballot box issue won't be the WE bullshit anyway. It'll be Build Back Better or Take Canada Back(wards). The good guys can't get complacent at all, but we're not dead in the water either.

The fate of the Leader of the Official Opposition is to be largely ignored by Canadians. That is actually true of Leaders of all Opposition Parties.

The only way that they can receive any attention at all is to be provocative (offensive?) enough for the media to pay attention to them. And even then what ever they say is quickly forgotten.

Some newspaper columnists and other pundits might be providing him with some attention but Canadians have proven over and over again that they believe that the opinions of a pundit and a toonie will buy them a double-double at Tim Hortons.

So I would not worry too much about the MSM on this score. The next few weeks are going to be dominated by what happens after all of the kids go back to school followed by the plans the Trudeau government sets out for the post-pandemic economic recovery.

BTW speaking of MSM, I hope Chantal is happy she's no longer on side with the angels. I only commented that her weekend piece was of note for how Quito Maggi seemed to have picked up on a trend, but I wasn't in favor of it. Especially now that Derek fucking Sloan just retweeted that article, about Trudeau's ambitious plans supposedly "misreading the mood", with commentary about him imposing "socialist fairy tales". Which is exactly what was printed in the goddamn Sun. Add to that Delacourt swooning over Ford. The once reputable Toronto Star is now the ToryStar and, therefore, dead.

That being said, that tweet in and of itself coming from someone so, dare I say it, deplorable, should offer some healthy motivation for those of us on the left of centre to fight this populist train wreck with even more might. Note that not once in O'Toole's ad did he ever mention unions. Trudeau did. Freeland did. All the Liberals did. Union leaders have come out in droves to endorse and lobby for what the Liberals are already signaling will be in the throne speech. But not O'Toole. Just "big government" and "elites". He's playing good cop to Sloan's bad cop and the MSM are playing right along.

Populism has finally reared its ugly head in Canada at the federal level. The CPC really is running a campaign of "nice" Donald Trump 2.0. Hope that throne speech puts a stake in it once and for all.

The NB CONservatives have booted a candidate for offensive remarks against the transgender community. Whether federal or provincial, CONservatives everywhere are the same.

The tool is better than weak Andy, thus more dangerous. Now we have no Main Stream media outlet pro liberal. The same crew that own the National Disgrace have bought the star, and the Globe, HAA HAAAA.

Aside from digging up dirt on the "shadow cabinet," the LPC war room better run today's P&P soundbite on a loop as an attack ad during the writ period. He literally went full Trump without the wig. Bashing Ghina, bashing Obama, saying he'd make better deals (the best deals) and calling his platform CANADA FIRST. Vichy Kapelos, asked the tool if he felt this messaging was different from Trump. He said no it's not different at all. OK then. LPC going to run out of hard drive space at this point. Way to score an own goal on an empty net.

So the cons, the NDP and media have officially killed a charity to own the Libs.

Whatever. It's sad but it's old news and won't be the ballot box issue anyway. Ignore polls and focus on the throne speech. Campaigns still matter.

I will say, however, that the Canadian affliction of tall poppy syndrome is absolutely pathological and really, really disturbing.

Then again, our populists and MSM couldn't wait to cannibalize an accomplished and capable woman for hosting an email server and having a family philanthropy foundation. So it's a shared sickness.

Right now? Eyes on the ball and gear up for September 23.

The cons canceled WE. That is the individual supremacy.

The Tool obviously believes that all Canadians have zero memory, not just his biblical reformer base. His attempt to rewrite the fact that Harper did cart wheels to entice Chinese investment and trade in the oil sands was priceless. The "tough on China" deal was so fabulous that the Cons kept details secret until out of power but that did not deter the Tool from trying to rewrite history.

The following is an excerpt from Wikipedia

While Canadian trade officials said in 2014 that FIPA was "unremarkable" and that it was a continuation of "Canada's past foreign investment promotion and protection practice, a 2014 Canadian Yearbook of International Law article described, FIPPA as "novel" as it was "non-reciprocal in favour of China".[15] The Yearbook article said that FIPPA provides a "general right of market access by Chinese investors to Canada but not by Canadian investors to China."[15] China was given a "wider scope for investment screening" than Canada.[15] The agreement did not include a "long-standing Canadian reservation for performance requirements that favour Aboriginal peoples".[15] It diluted "Canada's established position on transparency in investor-state arbitration".[15] ......
Elizabeth May said that the FIPA posed a threat to Canadian sovereignty. May described the negotiations as "secretive". The terms of the agreement were not released until after the Harper government fell.

The biblical Cons love affair with the past is similar to gathering up old technology, giving it a shiny coat of blue paint and introducing it as the next new wave. A complete replacement would perhaps work but the killer part comes in when a mixture of old and new coexists in the same space such as horse drawn carts mixed with semi trailers on a freeway. Introducing biblical governance into a modern society has the same effect, its unavoidable.