Is It Better To Denounce Donald Trump Or Mock him? 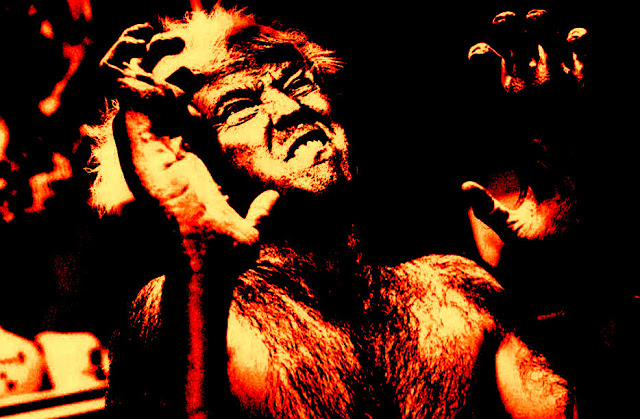 For almost four years decent Americans have called Donald Trump every name in the book, from depraved pussy grabber to deranged werewolf.

And they were all right.

But the sad truth is that very few of those angry words have had any effect on the orange oaf's bestial behaviour.

If anything he's getting worse.

For that is really grotesque and sleazy even by Trump's low standards.

Especially so soon after he blew a white rock out of his left nostril.

Pretty sure something just flew out of Trumps nose. #TrumpPressConference pic.twitter.com/fDhMNDcm9h

Leaving us to wonder whether it was Adderall or cocaine.

So I'm not surprised that Nicolas Kristof should wonder whether the way to beat to beat Trump is to mock him.

Most Americans don’t have much experience confronting authoritarian rulers, but people around the globe are veterans of such struggles. And the most important lesson arguably is “laughtivism”: the power of mockery.

Denouncing dictators has its place, but sly wit sometimes deflates them more effectively. Shaking one’s fist at a leader doesn’t win people over as much as making that leader a laughingstock.

“Every joke is a tiny revolution,” George Orwell wrote in 1945.

Since nothing else seems to be working.

America has had “Baby Trump” balloons, “Saturday Night Live” skits and streams of Trump memes and jokes. But all in all, Trump opponents tend to score higher on volume than on wit. So, having covered pro-democracy campaigns in many other countries, I suggest that Americans aghast at Trump absorb a lesson from abroad: Authoritarians are pompous creatures with monstrous egos and so tend to be particularly vulnerable to humor. They look mighty but are often balloons in need of a sharp pin.

I agree with most of what Kristof says, and when two years ago I was in an Edinburgh park and saw the anti-Trump resistance raising a Baby Trump... 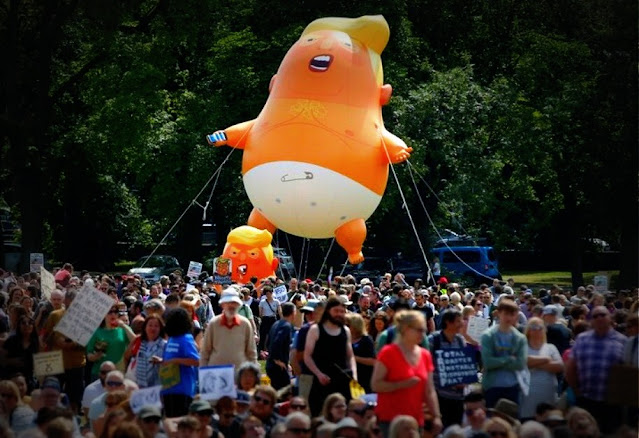 I had to fight off the urge to stick a sharp pin, or a sharp knife into it, because I thought it humanized Trump too much.

And I wanted to hear the air hiss out of him.

But I do think Kristof is a little late with his suggestions, for a lot of very talented cartoonists have been skewering Trump for years. 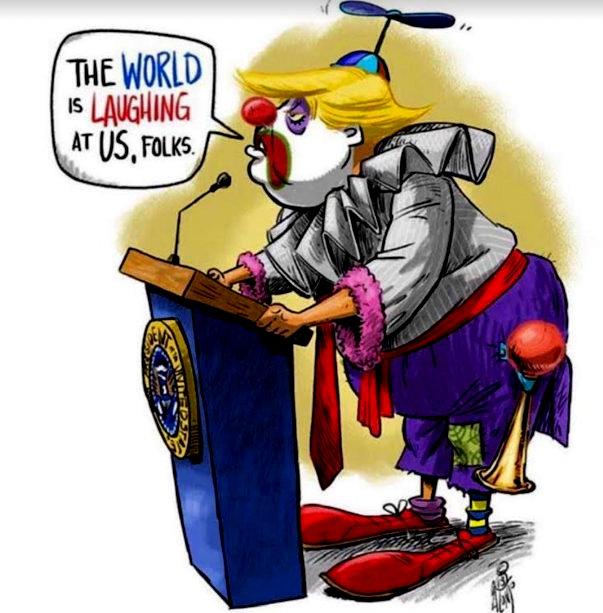 And I have tried to mock him, in my humble way, from before he even became president... 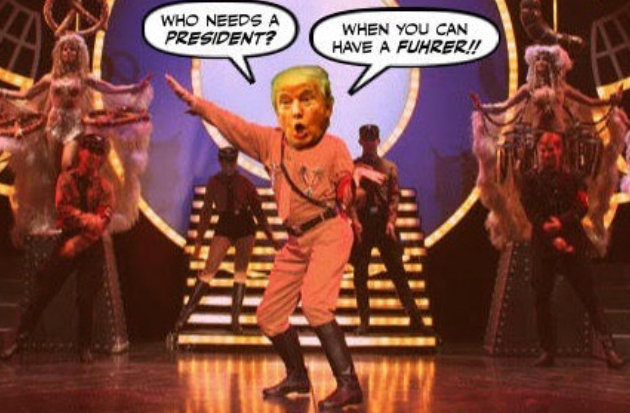 Because I could see where this scary movie was going... 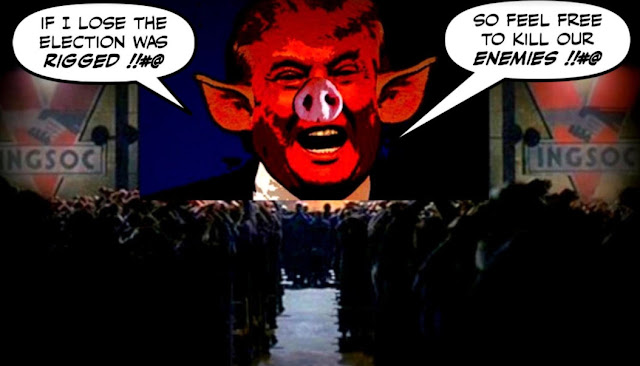 So today I really enjoyed this video...

For while it may be a little brutal, he so richly deserves it.

He's too dilapidated, too diseased, and too dangerous to be president. 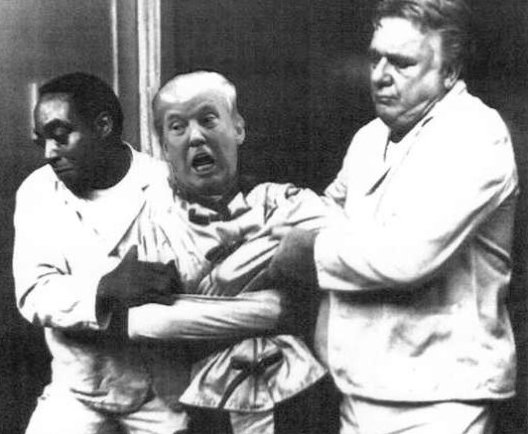 It has been a nightmare, right out of an old horror movie.

But with a little bit of luck, it will soon be over...

Even the Republicans won't want him now. The NYT revealed through his tax returns that he committed the cardinal sin of GOP politics for which there is no redemption:

Which of course shows their "values" or lack thereof. Racist? Fine. Homophobic? No biggie. A literal Nazi? Meh, *shrug emoji*.

But in debt? UNFORGIVABLE!

Thereby proving once and for all the GOP's moral bankruptcy.

Reminds me of a Family Guy clip where Trump gets into a "chicken fight" with Peter after Peter insults him with the most unforgivable truth that Trump could never abide:

Funny, at the end of the episode the "hunky prime minister of Canada" appears in a cameo to Make Trump Feel Inferior Again. Then Justin hops aboard a pair of Canada geese to fly back home and is all "fuck this madness, I'm out". Smart man.

Seems Seth MacFarlane might have a comedic prophecy of his own going on here. After all, there's a 0% chance that Ivanka is going to get any conjugal visits from her crush when she, the "consultant" on daddy's fraud scheme, ends up behind bars just like the rest of the crime family. I bet JT can't wait for sanity to return to D.C. too.

Have you seen the clip about Trump's new job?

Special correspondent from the White House

And owing $421 million to "unknown" parties. Russian Mobsters and Saudi Princes, anyone?

Too bad it sway the MAGAmorons, but nothing will.

Hi Jackie...I think I read somewhere that nothing enrages Trump more than having someone question whether he’s really a millionaire, so hopefully he will make some ugly remark, disgust millions, and finish off his own campaign. But I must say I am very nervous about the debate. Biden is going to have to be rigidly focused and not let himself be provoked by the beast Trump...

Hi jrkrideau....Thank you for that video. I thought it was well done and quite funny. Although I had a quibble with the way it ended. The image of Trump playing a guitar on a street corner was good. But it would have been better if he was playing a tiny accordion or a balalaika. Or maybe just a tambourine...😊

Hi anon....It really is outrageous that a billionaire should pay so little in taxes. And you’re right a lot of his supporters will almost certainly dismiss the NYT’s story as “fake news.” And the fact that he owes $421 billion to unknown creditors should scare us all. He’s obviously hoping that they won’t foreclose on him as long as he is president, so he’ll do anything to stay in office...