Erin O'Toole and the Brutal Verdict of Canadians 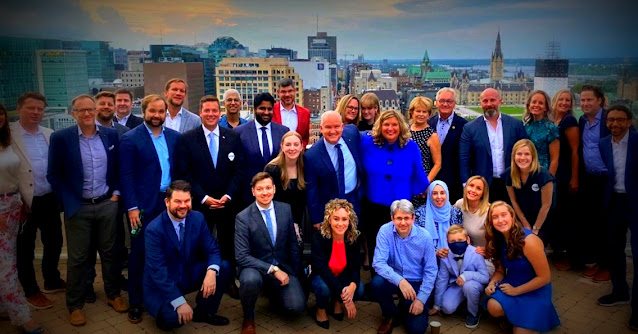 Ever since he posed for this picture, and helped trigger a Con COVID outbreak, Erin O'Toole has been relatively quiet.

He has refrained from attacking Justin Trudeau like Andrew Scheer used to do every day of the year.

O'Toole was no doubt trying to fool Canadians into believing that he may be the leader of the Bigot Party, but he's really a nice guy.

But sadly, that was then, and this is now.

Conservatives are here to fight for Canadians. 🇨🇦

Justin Trudeau is here to shut down Parliamentary debate.

Isn't that so familiar, and so pathetic?

The Cons are back to the same old grubby attack ads that try to make Justin Trudeau look like a criminal.

When in fact all the Trudeau government is trying to do, with the help of the NDP, is get help as quickly as possible to millions of Canadians who are depending on that money to survive.

And the Cons are the ones who are acting like criminals, trying to delay that aid for crass political reasons, as only the ghastly members of the Harper Party could... 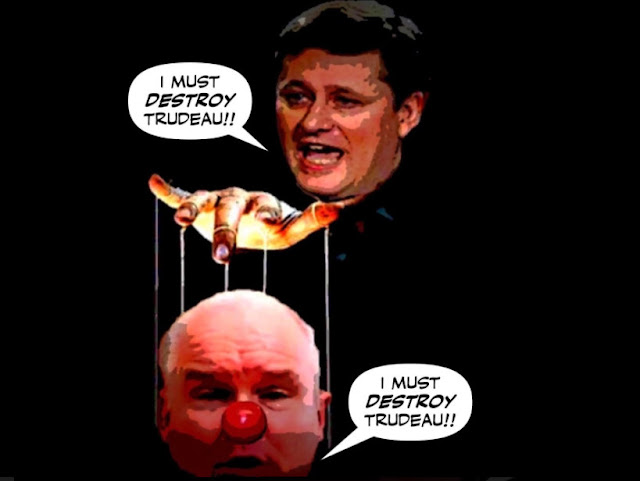 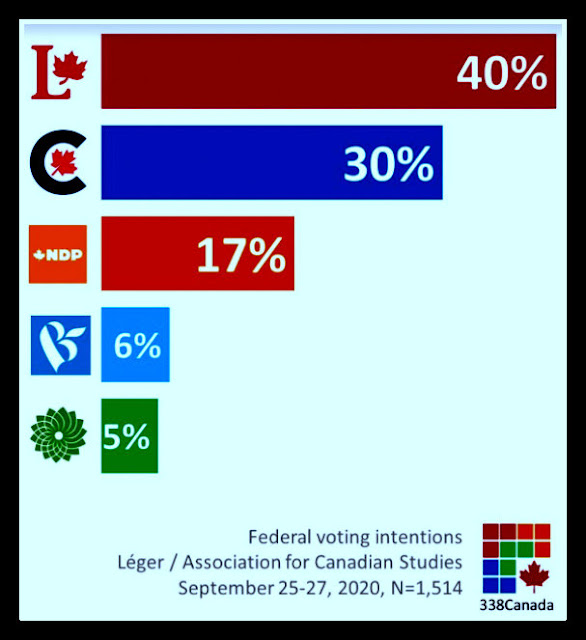 It's the first major poll since the Throne Speech, and it tells me two things:

One, Erin O'Toole didn't even get a tiny bump in the polls. The verdict of Canadians has so far been brutal. He's flown off the runway and landed flat on his belly.

And two, Canadians liked what they heard in the Throne Speech, and trust Trudeau to keep leading them through the darkness of this monstrous pandemic... 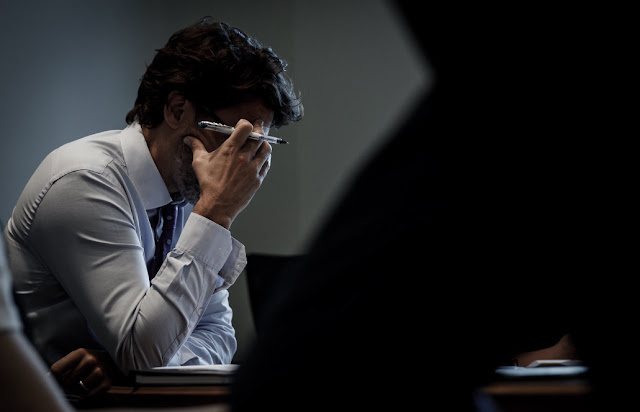 As he has done so brilliantly for so long.

The present is still bleak.

But from where I stand the future looks hopeful... 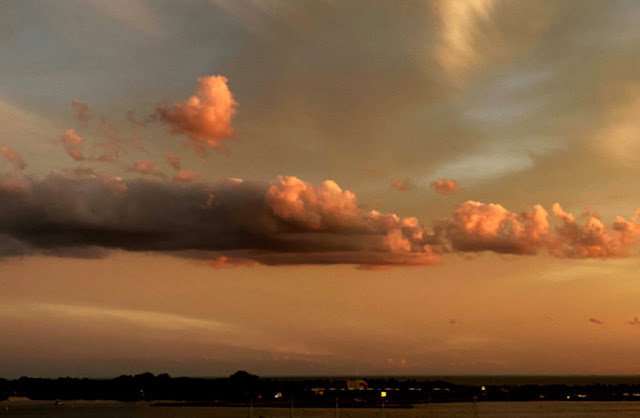 It is a very nice break in the clouds after the doldrums of this past summer, Simon. I saw the Mainstreet and Nanos from yesterday but apparently they were being weird in some of their sampling. That Leger looks nice though and I hope it's the start of a trend.

But like you said, the present is still bleak, and after today's intolerable screeching in QP over the same damn WeGhazi bullshit over and over again, I'm still concerned about what kind of nuclear torpedoes the Cons (with help from weathervane Singh and bitter BernieCons Julian and Angus) may pull when those committees return.

My hope is that by this time, Canadians will have tuned it out or even that it'll backfire on the "prosecutors" for focusing on nonsense "scandals" instead of a deadly pandemic. Or that the Liberals figure out some kind of procedural monkey-wrenching to stall or kick the can and basically derail this smear campaign in every which way. Sleepy Joe -- er, Sleepy Rob Anders has been charged with tax evasion. A founding member of the CPC is another tax cheat like Trump! Meanwhile, Trudeau has been charged with... nothing. Who the fuck are these assholes to accuse him of "lacking ethics"?

It seems like 100 years ago but I still remember when the pandemic first broke out and the Liberals were focused on that, the Cons were trying to relitigate the SNC drama which had already been decided on in an election they lost, and they rightly looked like selfish idiots completely out of touch with the concerns of everyday Canadians. Now it's on record that they voted against pandemic aid out of some bad-faith concern-trolling about parliamentary process.

People are DYING. Families are torn apart. Trick-or-treat and Thanksgiving are cancelled and Christmas is still anyone's guess. The Untied States is on the verge of civil war and chaos spilling over the border. Nobody GIVES A FUCK about the amendment to the subamendment to the subsection of the paragraph of the motion before the subcommittee. This party is so out of touch as to be callous, morbid sociopaths who smiled on camera when they gave a thumbs down to supporting desperate people during a goddamn pandemic. I hope they wear that shame next election. "Pro-life" my ass.

I will say that Trudeau must be eating more Popeye spinach as of late, because he's been really aggressive in fighting back at them in a way I haven't seen in years. Morneau was a nice guy but maybe too nice; Freeland, meanwhile, has consistently shown a sharp and impressive ability to squash Skippy like the detestable little gnat he is. It's going to be a really rough ride for what remains of 2020, but hopefully an election in the early spring puts these garbage cons in the blue rubbish bin where they rightfully belong.

The tool has proven to be quite the little multi-tasker by spreading Con bullshit and Covid 19 all at the same time. I wonder if he's given much thought to how recklessly irresponsible and remarkably stupid it was to have so many mask-less, close encounters with his fellow Cons and who knows who else. If the tool had any integrity at all he would post a video basically saying "me was stupid, you need not be". However, that would be admitting he was wrong which Cons have an extreme aversion to doing. So, in his brief tenure as Con leader, the tool has failed miserably on two major attributes that makes a great leader. Leading by example and accepting responsibility. Add to that no vision or plan and what is left isn't fit to run a shithouse let alone a country.
That poll is very encouraging, Simon. It'll be very interesting to see what they'll be once the tool's covid spreading adventure has sunk in with Canadians. Especially if people get very ill or die because of it.
JD

It is early morning but I think I just heard the vote on the Speech from the Throne was 331 to 0 (zero!).

Apparently the Cons approve the new proposed course of action. Perhaps O'Toole needs a new title. Leader of the Acquiescent?

Simon, what's your read on this?

This is exactly what I was afraid of, them going ballistic. Now they want to drag Freeland and Rodriguez and Chagger (again) and the whole government in?

I hope this backfires or that the Liberals figure out some way to bury it or kick the can. I am so sick of this shit!

Hi Jackie@9:25 PM....I too have noticed that Justin is a lot more feisty these days, and needless to say I'm enjoying every minute. It's about time he went after the Cons for he has been too polite for too long. I like polite people because my parents raised me that way, and it is or was a very Canadian trait. But the Con scum don't deserve to be treated with respect, so the more the better...

Hi JD...Yes, spreading Con bullshit and Covid 19 at the same time takes a certain talent, but he has yet to apologize for his criminally irresponsible behaviour. It seems, at least from his propaganda, that he believes the more people see his beaming face the more they will like him. I hate to tell him but I'm afraid he couldn't be more wrong. When I see the leader of the Bigot Party beaming like a Halloween pumpkin, i find it scary. And as you point out, he has no plan for anything, so the sooner we can turn him into a nice pumpkin pie the better...

Hi Cathie...I agree, Jackie is so brilliant. Don't forget to check out her blog https://missfuddleduddle.blogspot.com because it's also brilliant....

Hi jrkrideau... Leader of the Acquiescent? That's very good. The Cons really are shameless. They kicked and screamed but when the time came they folded like a cheap suit. I think I was right to compare Erin O'Toole to a hot air balloon, and I can hardly wait until he spring s a leak...

Hi Jacke @5:14 PM....I don't think that attempts to revive the fake WE scandal will be successful. The Cons would love to apply mouth to anus resuscitation, but I can't believe that most Canadians want Parliament to waste any time on that, when a second COVID wave appears to be bearing down on us. The Cons and their poodle Bob Fife will have to do better...