Covid-19 and the Con Mask Wars 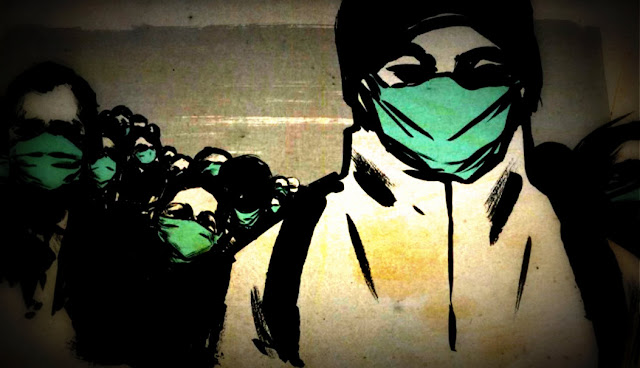 I had hoped, after all that heroic work by our frontline medical workers, and all that isolation misery, that we would be further ahead in our battle to tame COVID-19.

But sadly we're not. We're falling back in many places in Canada.

People are fighting over whether or not they should be wearing masks.

And the virus is surging. 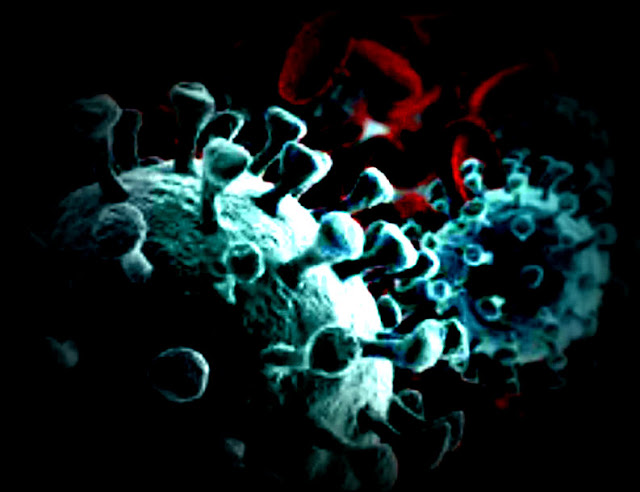 So much so that even the unflappable Dr Theresa Tam is warning that the pandemic could spiral out of control.

“The ongoing increase in new cases being reported daily continues to give cause for concern,” Tam said in a statement.

“With continued circulation of the virus, the situation could change quickly and we could lose the ability to keep COVID-19 cases at manageable levels.”

In Quebec and Ontario police will now be able to impose heavy fines on those who refuse to social distance or wear a mask.

And that should scare away anti-maskers like these who like to hold all night raves at Cherry Beach in Toronto...

Video from last night's "Freedom To Dance" at Cherry Beach. The event was run Mothers Against Distancing from 8 PM to 6 AM. Organizer Chris Sky has held several protests that defy #COVID19 safety measures. It's believed hundreds of people attended, and police kept watch. #Toronto pic.twitter.com/ggUMEyw1oV

But while those kind of covidiots can easily be controlled or dismissed, what a lot of people don't seem to realize is that the anti-mask/anti-lockdown movement is now bigger than most people imagine.

And has a disturbing alien dimension.

To understand that, first watch this video of a recent march in Montreal...

And listen to what they were chanting...

A chant I have never ever heard at any demonstration anywhere in Canada before.

But this helps explain what's happening...

They may be Canadians, but Trump is their leader, their Godzilla, their Messiah.

The Cons are their party. 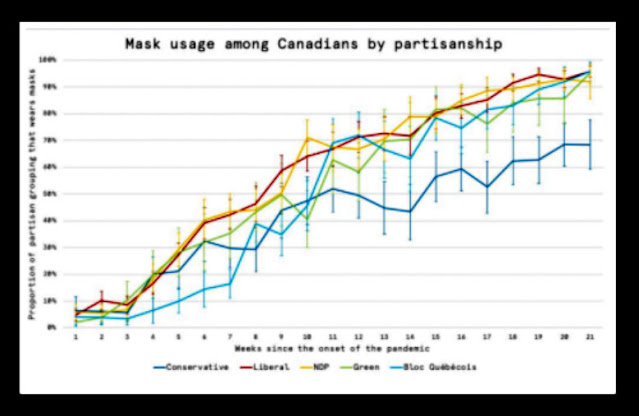 And as you can see their rabid anti-mask supporters have turned the mask issue into a gaping partisan divide.

During the first several months of the pandemic, supporters of the Conservative Party of Canada were relatively indistinguishable from other Canadians in terms of their mask usage, suggesting a cross-partisan consensus on masks early on in the pandemic.

But by early June we observe a clear divide between Conservative voters and other Canadians in relation to mask usage — a divide that appears to be widening over time.

With many Cons choosing to listen to their real leader Donald Trump, and reject masks like he does. 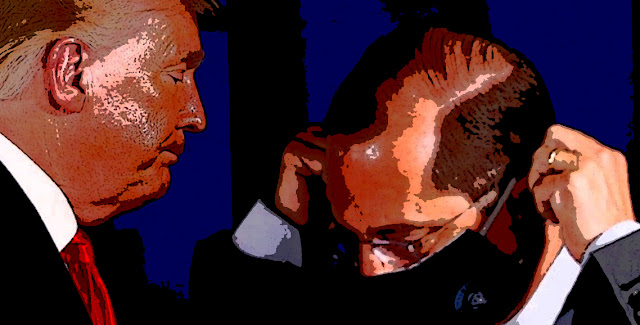 Even if by so doing they are endangering the lives of elderly and vulnerable Canadians.

Not only by helping to spread the coronavirus, but also by spreading deranged conspiracy theories.

Which can further damage efforts to control COVID-19.

And the most tragic result of those diseased Con games, is that it could all contribute to a deadly fall... 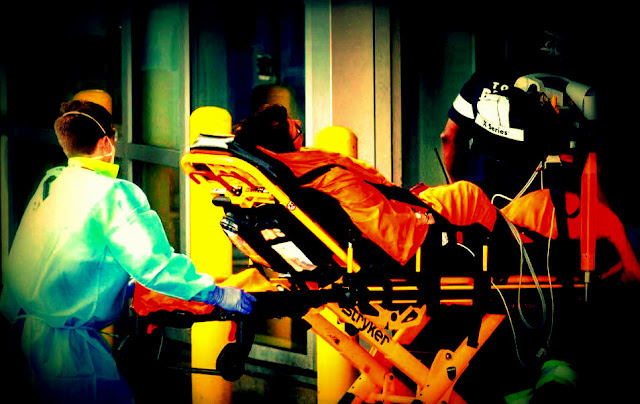 As a second wave and the influenza virus combine to wreak havoc, and overwhelm our heroic but exhausted frontline workers.

And for that those responsible must never be forgiven...

The cops themselves are some of the worst mask offenders. I rarely see a Toronto cop setting a good example.

I was in Home Depot recently and the cops arrived to deal with a suspected shoplifter. The suspect and store manager were properly masked, one cop was dick-nosing, one had his mask under his chin and a third had his in his hand! This was inside the store where the mask bylaw applied!

If the cops start handing out mask tickets, enforcement will be selective. They'll continue to turn a blind eye to white right-wing extremists, while nailing all the usual suspects - blacks, browns, natives, homeless, LGBT, etc. Look at the racist treatment of Dr. Ngola in New Brunswick to see how this will play out.

We're going to get a second wave, it's inevitable. The best we can do is protect ourselves and our loved ones. Mask it or casket, your choice. Stay safe folks.

Error O'Foole and Yves Blankcheque testing positive is the epitome of "partisanship" as regards COVID and masks. Super spreader cons denying science, and even going so far as to gaslight and spread FUD about Dr. Tam and the Liberal government's pandemic response. She and Fauci could compare notes. As an aside I still don't recall if anyone sent best wishes to Sophie. Trudeau is always the bigger man, but did anyone on the oppo side give a shit if she lived or died? All I remember is that head-hunting shitposter Fife retweeting salacious gossip about how she "might have" become ill. But I digress.

Provincial cons are no better on the public health front. Just look how Kenney and Fraud have damaged the credibility of Dr. Hinshaw and everyone at Public Health Ontario. Reading Mike Gibbs' Twitter feed is such an eye-opener and no doubt why they went out of their way to silence him. Then there's Legault, another stubborn denialist who laid the groundwork for this with the stupid Bill 21 bullshit that's now got conspiracy theorists believing that mask wearing is a subversive plot to normalize Sharia law. Now they want more healthcare money with no strings attached. Trudeau should tell them to put a mask on, muzzle themselves and STFU. Speak moistly and carry a hockey stick.

The media plays into it with their bias and both-siderism that tilts in favor of "holding the government to account," rather than saying outright that COVID denialism is predominantly the domain of cons. They grill Hajdu in a star chamber, whistle past the provincial graveyard and obfuscate around the issue of jurisdiction. O'Foole and Singh are singing so much the same tune, blaming Trudeau for all that's rotten at Queen's Park and Jason's shop of horrors, that I wonder if Jeff Ballzinger isn't moonlighting as an "issues manager" for the (federal) NDP.

It's not just Internet conspiracy theorists like QAnon, but the MSM and the conservative movement as a whole who are a threat to the public health. That's not "partisan bias" no matter how much the MSM tries to spin it that way. That's a fact. The "pro-life" party thrives on mass death.

I think they are chanting " Liberte" not USA but the whole idea of freedom from government regulation being the most important thing while a virus is killing people sounds like our Southern neighbor for sure.

O/T former Liberal PM, Pierre Trudeau's successor John Turner has died at the age of 91. 🙁 Poor guy never had much of a chance in the ruthless political grind.

I remember those photos of Justin with the elder Liberal statesmen at his big 90th birthday party last year. Canada has had only half as many PMs as the U.S. has had presidents (Justin is PM23, Biden -- assuming he wins -- would be POTUS46), and yet I think Canada has more former PMs still alive. We have four (Carter, Bush II, Clinton and Obama); I think Canada has six? Clark, Mulroney, Campbell, Chrétien, Martin, and Hitler. I mean Harper.

That's two major deaths in the prime ministerial realm in a short amount of time, counting Mrs. Chrétien. Aline was the love of his life. I hope Jean is OK.

The chant at the end is 'Liberté' which of course they will attain, the way the numbers are spiking !

He really was too nice of a man for politics and a dignified public servant. Props to Lego (Lego! Seriously, Lego?), and fuck -- fuck -- the Glob and Oil.

Hi anon @12:07 pm... It's not possible to properly enforce the mask law. There are not enough police officers, and as you point out enforcement that enforcement could be selective and unfair. But the police should use the threat of fines to try to draw line in the sand, and discourage the aggressively stupid, or the same thing could happen here as is happening in the UK where another massive lockdown is looming. It's a public health emergency so emergency measures must be taken...

Hi Jackie...the conspiracy nuts believe that masks are a plot to normalize Sharia law? You're right, all of that is also a public health threat. From what I see every day I believe we now have a Covid pandemic, and an epidemic of mental illness. It's not surprising, we have all been damaged to some degree, but it is scary, and if law and order breaks down this could all become a dystopian nightmare. I still hope that most Canadians will help keep this country on an even keel, but it will be touch and go...

Hi anon@2:08pm... They are chanting "Liberté" but they are also chanting USA, USA. And I added another video to make that clear. But you're right. It's hard to say which chant is crazier...

Hi unknown...As I said above my ears are not failing me. At some point the anti-mask crusaders did start chanting USA, USA. But that's hard to make out in that first video clip, so I added another video to make that clearer....

Hi Jackie...You're right, Poli lego did a better job of announcing John Turner's death than some of the clowns in the Con media. But once again they revealed their rabid bias, so they only shot themselves in the foot. Again. I hate what those ugly AmeriCons are doing to our political culture, and they need to be held to account...

The biblical Cons derive their power from a system of authoritarian religious beliefs. Several years ago they saw opportunity to politicize the wearing of face coverings as a symbol of religious repression in order to slam both the Muslin religion and the liberal politicians that advocated inclusion. That was then but now wearing a face mask can also include a health conscious population fighting the spread of a deadly virus. Belief systems cannot readily adapt to new realities, the stance that religious wearing of masks is bad but wearing one for health reasons is good implies that their followers have to exercise observation and perform a mental calculation based on observation. Observing and thinking is something to be avoided at all costs because once started it is a slippery path towards becoming a fu...ng liberal. The solution is benevolent compromise where its understood that face coverings are bad but the weak that choose to do so are forgiven for the time being. They will never come straight out and say this is different, cover your faces! To do so would shatter their belief based system of authoritarian control. If things get really bad they can always claim we are being punished for our sins and wavering belief. A deadly self contained circle, reminiscent of the good old days.