Donald Trump and the Video That's Driving Him Crazy 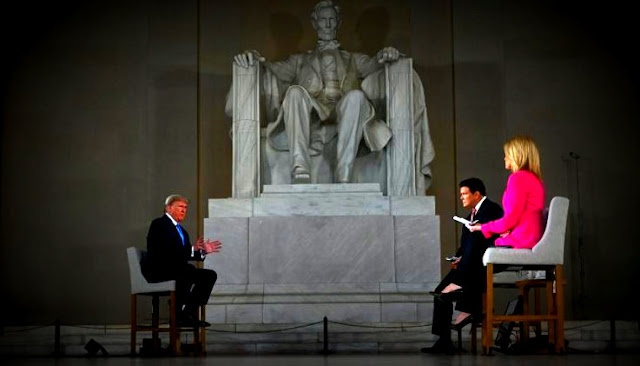 And making an absolute fool of himself over and over again.

But now it seems that the outraged spirit of Lincoln may have seized its revenge.

For a group of disaffected Republicans who call themselves The Lincoln Project have just released a video that is driving Trump crazy, or crazier...


One that had him tweeting like a wild man late into the night on Monday.

As for me, I summed up my feelings in this tweet.

Donald Trump comparing himself to Abraham Lincoln makes me feel like vomiting.The great Lincoln saved his country, the grubby Trump is destroying it. I can hardly wait for the election when decent Americans will finally get to shout “Sic Semper Tyrannis!!” https://t.co/xpgJZtcZXs
— 🇨🇦 Simon 🏴󠁧󠁢󠁳󠁣󠁴󠁿 🌈🏂 (@montrealsimon) May 4, 2020

The Beast has clearly been wounded.

The pressure is getting to him.

It's only a matter of time before he finally cracks.

And his epitaph is already written... 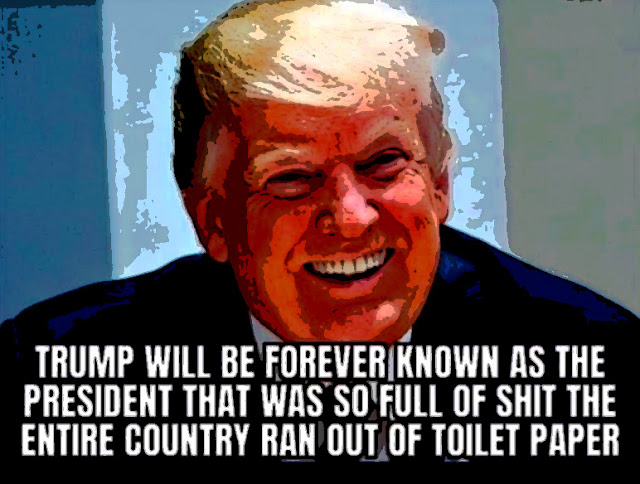 What a ghastly sight seeing Trump desecrating the Lincoln Memorial for his own personal gain. And how sweet that it was Kellyann's husband who helped put that video together. I would love to be a fly on the wall at the Conway dinner table. George, "Hi honey, how was your day?" Kellyann, "Hi Moonface, not bad, the usual bullshit. You know you really pissed him off this time. He's babbling incoherently and I think he's headed for a massive stroke if you dont back off." George, "I know. tell me more..."
You know Trump is pissed when he unleashes his vast repertoire of a ten year old's derogatory nicknames. From the classics like "Crooked Hillary" or Stormy's "Horse Face" or calling Omarosa a dog, to "Sleepy Joe Biden" and "Little Adam Schiff". They all have a common purpose to insult and denigrate anyone who dares to criticize Trumplethinskin. Well I say suck it up buttercup. Trump has earned every criticism sent his way and while he's tweeting out his hissy fits we can all rest assured that this nickname has and will always be reserved for him. Asshole.
JD

I do have problems with anyone seeking to emulate John Wilkes Booth... a white supremacist (anti-immigrant "know nothing" and slavery supporter) as well as assassin.

That video is really powerful, and if it bothers Trump so much I hope his opponents can come up with many similar ones. Like Simon I believe that Trump is cracking up, and it won't take too much to push him over the edge.

Trump's indecision/weak response/dithering and GOP venality have killed more Americans in four months than the 10 most intense years of the Vietnam War.

"Other than that, Mr. Lincoln, how did you like the play? I heard it got great ratings, better than Monday Night Football and The Bachelor..."

The GOP deflects poorly from accusations of racism by touting themselves as the "party of Lincoln." Yet they blame Lincoln for Obama being president, and even boycotted his commemoration of the 50th anniversary of Martin Luther King's "I Have a Dream" speech back in 2013. Talk about a truly maltreated president. If this ad got under Trump's thin orange skin, his rotten pumpkin head is going to explode when he sees the upcoming live-streamed commencement address from the Obamas, plus Michelle's highly anticipated Netflix documentary.

It aggravates him to no end that a highly successful black man and his beautiful wife are everything that he and his tacky Klan will never be. Unlike such laudable statesmen as Lincoln, Obama, both Roosevelts, JFK, and Eisenhower, Trump isn't even worthy of the title of president. He's the resident, an illegitimate squatter, and there would be no sweeter irony than to see this bigoted, corrupt, treasonous, lowlife slumlord and his band of thugs evicted from 1600 Penn once and for all.

Or a highly successful black woman and her handsome husband! I agree with you, Jackie, but Michelle Obama also achieved a great deal, with a working-class background and merit scholarships to TWO Ivy League schools! https://en.wikipedia.org/wiki/Michelle_Obama And many important functions afterwards.

Hi anon....good for Biden. It's time to mock Trump harder than ever before, until his fragile ego shreds, and he blows up. Or drops dead....

Hi JD...Yes, it was a ghastly sight. Abraham Lincoln had more class in his big toe than Trump has in his whole body. And yes, Somebody should do a reality show on George and Kellyann Conway, I know I'd watch it. A little horror and a little humour all in one. As for Trump calling people names it just makes him even more disgusting. And what frustrates me is that we still haven't come up with a good name for him, one that REALLY bothers him. I can think of a few
but they're too rude...😉

Hi Lagatta....Don't worry, no John Wilkes Booth will go after Trump, they'll go after Trudeau for "stealing" their guns. Violent righ-wing extremists are threatening us all, wile far too many progressives are busy fighting themselves....

Hi anon....I do believe that Trump is cracking up, but It's going to take a massive blow, or street demonstrations to bring the monster down. And maybe he will screw himself and will be brought down by voters in November...

Hi anon....It's an astonishing number, and I feel sorry for our neighbours having to put up with such a beast. But as I have said before, i am still confident that In November the beast will go down with a sickening thud. And we'll be able to join with our decent neighbours and celebrate for weeks....

Hi Jackie...As usual I agree with everything you say. But at least now Trump is so much weaker than he once was. He has nothing to show for his presidency but death, economic disaster, and a bunch of reactionary judges. I want Trump to be put on trial, and although I don't believe in the death penalty, for him I'll make an exception. Fry him in a giant pan until his fat bubbles....

Oh, I agree, my reference was to Booth's Latin cry as he was killing Lincoln.

Sorry, I loathe Trump more than just about anyone else (except Bolsonaro) and to be fair, although a socialist, the North Korean leader. But I don't agree with the death penalty EXCEPT in some very unusual cases such as surviving Nazi war criminals, as yes, they would have continued to stir the racist pot in Europe and the Americas. Let them rot in jail.

Want to add that I agree with Chile and Argentina NOT executing Pinochet and Videla, though Maggie's collusion with the bloody dictator was beyond disgusting. I have friends who have suffered horribly from those régimes, but there are reasons that the freed countries did not indulge in a bloodbath against the old tyrants - though it was deserved.