Donald Trump, James Comey, and the Coming War With Iran 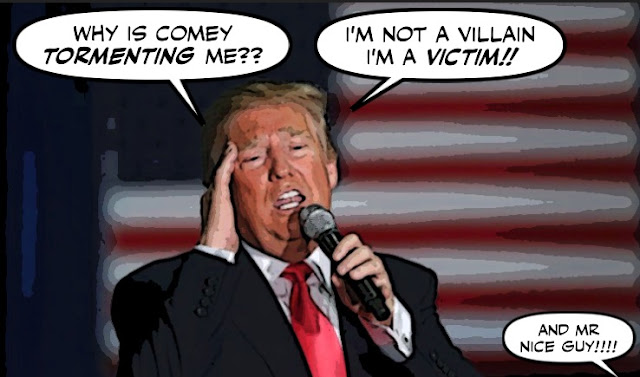 I can only imagine what kind of state Donald Trump must be in as James Comey, the FBI director he fired, prepares to testify tomorrow.

But it can't be very pretty.

Not when Boss Trump probably thought he had "fixed" the Comey problem... 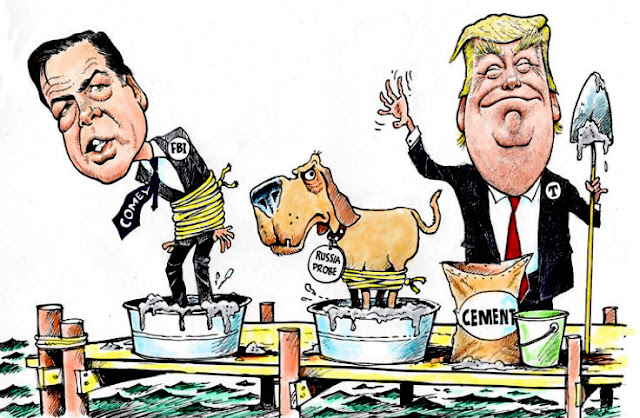 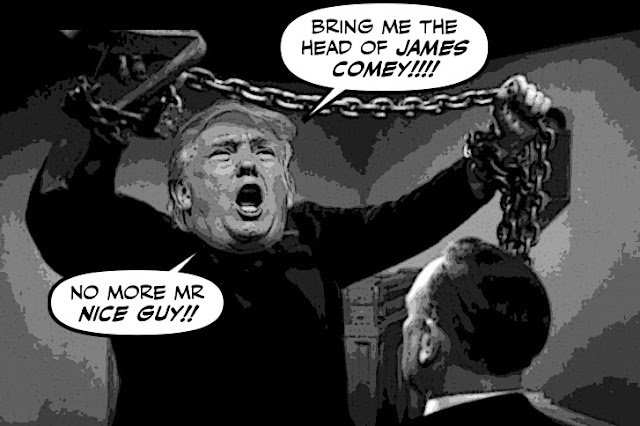 And apparently ready to strike back.

Alone in the White House in recent days, President Trump — frustrated and defiant — has been spoiling for a fight, according to his confidants and associates.

Glued even more than usual to the cable news shows that blare from the televisions in his private living quarters, or from the 60-inch flat screen he had installed in his cramped study off the Oval Office, he has fumed about “fake news.”

Trump is keen to be a participant rather than just another viewer, two senior White House officials said, including the possibility of taking to Twitter to offer acerbic commentary during the hearing.

Which is as he would say himself. Sad.

Because not only has Trump already made it abundantly clear, on Twitter, that Comey was fired because he refused to stop investigating his Russian connections.

If this story is true, it's game over.

The nation’s top intelligence official told associates in March that President Trump asked him if he could intervene with then-FBI Director James B. Comey to get the bureau to back off its focus on former national security adviser Michael Flynn in its Russia probe, according to officials.

Or a prime case of obstruction of justice.

And all that will remain to be determined is whether Trump is working for Russia or Saudi Arabia. 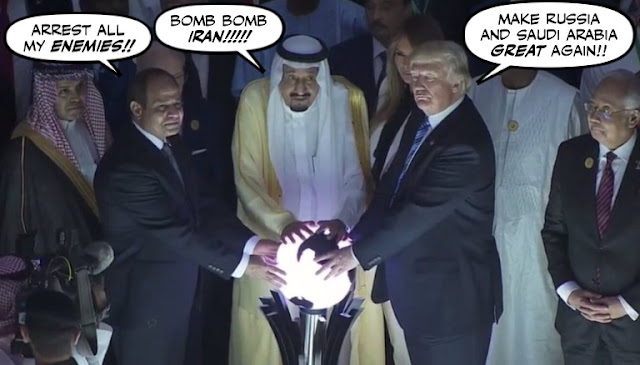 U.S. President Donald Trump took sides in a deep rift in the Arab world on Tuesday, praising Middle East countries’ actions against American ally Qatar over Islamist militants even though the tiny Gulf state hosts the largest U.S. air base in the region.

The split among the Sunni Muslim states erupted last month after the summit of Muslim leaders in Saudi Arabia, where Trump denounced Shi’ite Muslim Iran’s “destabilising interventions” in Arab lands, where Tehran is locked in a tussle with Riyadh for influence.

And of course, how much gold does it take to buy him? 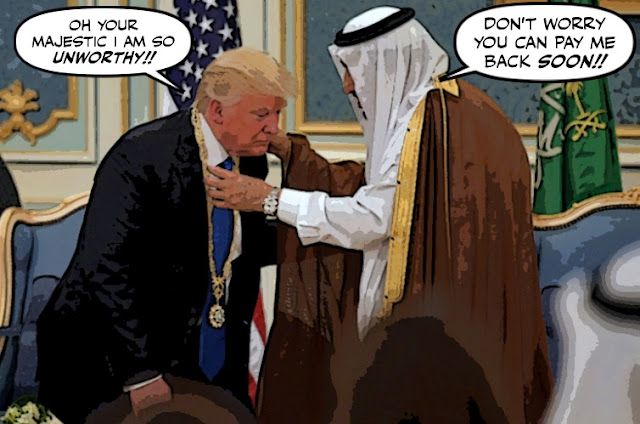 And is he willing to start a war with Iran to take the heat off himself?

But then this would be a good way for Trump's Sunni friends to start one.

The Islamic State in Iraq and Syria group claimed a pair of attacks Wednesday on Iran's parliament and the shrine of Ayatollah Ruhollah Khomeini, which have killed two security guards and wounded more than 30 people, with the siege at the legislature still underway.

And Stephen King did warn us... 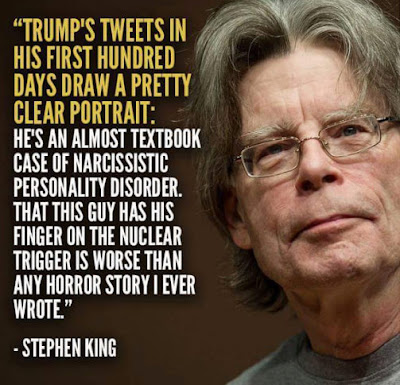 So you know the answer to that one... 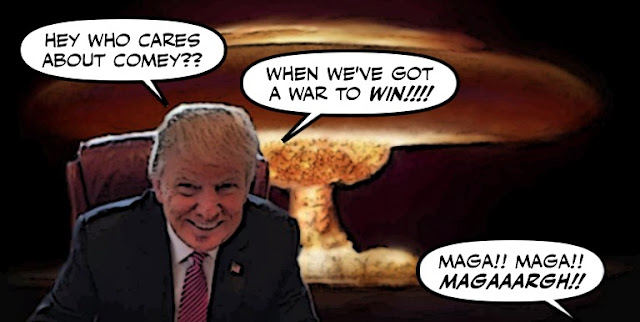 Trump has never been more vulnerable.

And he must be removed from office as soon as possible.

Labels: Donald Trump, James Comey, The Madness of Trump, The War With Iran

The only thing that helps me sleep at night is the thought that Mattis has a similar set up with the military that Kissinger had during Nixon's drunken Watergate days. "Do not launch unless I ok it". Entirely unconstitutional, entirely responsible.

Washington (CNN) US investigators believe Russian hackers breached Qatar's state news agency and planted a fake news report that contributed to a crisis among the US' closest Gulf allies, according to US officials briefed on the investigation.

Somebody should let Donnie know that Qatar's Al Udeid Air Base is home to some 12,000 US military personnel. MAGA, MAGA!

His first move is Qtar, I wonder if the Prince of Darkness will be a multi billion wet work contract for both sides.

Is Mattis that sane? I guess we can hope so.

Somebody should let Donnie know that Qatar's Al Udeid Air Base is home to some 12,000 US military personnel.

Even if they did, do you think he would retain that fact for more than ten minutes? One cannot expect miracles.


I'd, also, be very suspicious of some of the other Arab states or Israel. Qatar is a bit of a loose cannon but it supports Hamas ( and the Muslim Brotherhhood and Al Jazzera drives other local dictatorships crazy.

Israel or Egypt might be likely candidates for example as state actors. I rather discount the Maldives and Libya. And it does not have to be a sovereign state actor.

Comey is going to perjure himself. He doesn’t have any choice at this point. He has already perjured himself, so to not do it this time, he would be admitting to having done it the last time.

Didn't Stephen King set 1408 at one of Trump's haunted hotels? The ghosts of bankruptcies past, present, and future...

hi anon...I too take some comfort in the fact that Jim Mattis is there to restrain Trump, or act like an adult in the situation room. But unfortunately the man they call the Warrior Monk or Mad Dog can't be trusted to moderate Trump when it comes to Iran. And the reason for that is he is said to carry a grudge dating back to the attack on the marine barracks in Beirut in 1983, which killed 241 people. An attack which Mattis believes was carried out by a suicide truck bomber trained in Iran. So let's hope history doesn't come back to haunt us...

hi anon...it now seems that while the hackers may have been Russian, it's not clear they were working for Putin. They could have been hired by Saudi Arabia or some other Sunni state to discredit Qatar. But of course, whoever paid those hackers does play into the hands of Putin, for it threatens that big U.S. base. And if Saudi Arabia now feels it can target Qatar so blatantly, it's only because the idiot Trump has emboldened it and the other members of the Sunni conglomerate. And somehow managed to make the Middle East even more unstable...

hi Steve...I honestly don't believe that Trump has any idea what he is doing. The Saudis gave him a reception fit for a king, and it seems to have gone to his head. Even though as everybody knows, the Saudis are the nexus of terrorism...

hi anon...I don't know if Comey is going to perjure himself, but I do think he must feel at least partially responsible for Trump's victory, and will do what he can to overcome that unfortunate legacy...

hi anon...I don't know if the Dolphin Hotel is owned by Trump. But what I do know is that in King's story, the breakfast menu in the haunted room 1408 does change from French to Russian and then into a picture of a wolf eating a small boy. And when the writer finally manages to escape the fiery inferno that room 1408 has become, he sleeps with the lights on to try to forget the shade of yellow and orange that reminds him of 1408. When the Trump nightmare is finally over, I imagine a lot of Americans will be sleeping with their lights on to try to ensure that a nightmare like that one never happens again... ;)

Simon, there are problematic things about Mattis but he is much deeper than the "Mad Dog" tag. The man is a brilliant soldier and intellectual.
The biggest issue with Mattis is Iran, but the good news is that he supports the Iran deal.
For now I will take what I can get.

hi jrkrideau...yes, the facts of this latest hacking seem even murkier than usual. But there can be no doubt that the Saudis have been emboldened by Trump to go after Qatar. They hate that country for sharing the largest LNG field in the world with Iran, for supporting Hamas, and above all for owning Al Jazeera which frequently criticizes the corrupt ruling families in the region. The Saudis and their fellow Sunnis have been trying to drag the U.S. into a war against the Shia for a long time. And now with Trump in power they may finally succeed. Which needless to say can only make our world even more dangerous...

hi anon...I don't disagree with anything you say. Mattis is a cut above most U.S. generals, a very interesting man, and we must take what we can get. But then of course I dare not say anything else, or my marine cousins in Maine would kill me... ;)

Pay attention to him on North Korea, he has been urging calm. He is almost doubling as Secretary of State sometimes, which is scary for an ex general.