Is Donald Trump Getting Tired of Playing President? 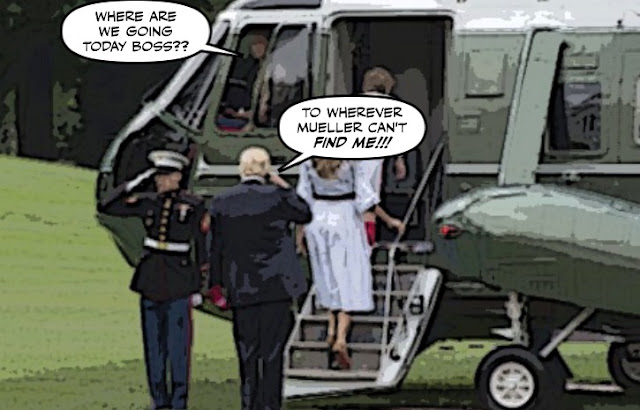 Donald Trump made his first visit to Camp David on the weekend, no doubt hoping to escape the madding media, and try to pull himself together, after yet another terrible week in office.

A week where he seemed to confirm that he was under investigation, and was seen yelling at TV sets in the White House.

So he really needed a leafy break.

But Camp David has only a one-hole golf course, so Trump did have time to tweet.

Only to reveal once again his compulsive need to compare himself to Obama, and show how desperate he is becoming. 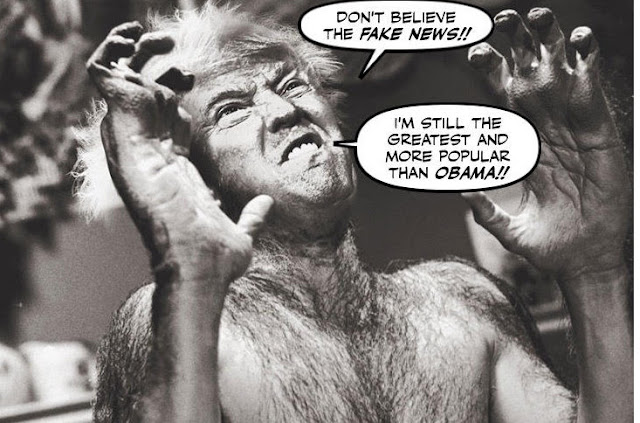 But sadly for him, two years after he glided down that golden escalator to announce he wanted to be president, other polls show his star is finally fading.

And that even some of his own supporters are starting to tune him out.

Two years later, President Trump is struggling to keep his viewers engaged. Governing turns out to be less entertaining than the spectacle of a political horse race — especially when complicated by conflict-of-interest scandals, a widening criminal inquiry and a policy agenda bogged down by infighting and partisanship.

A new poll last week by the Associated Press-NORC Center for Public Affairs Research found that 64 percent of Americans disapprove of the job Trump is doing; only 35 percent approve.

He's just not the star he once was. And while Charles Blow is probably right when he writes that Trump is girding for a fight. 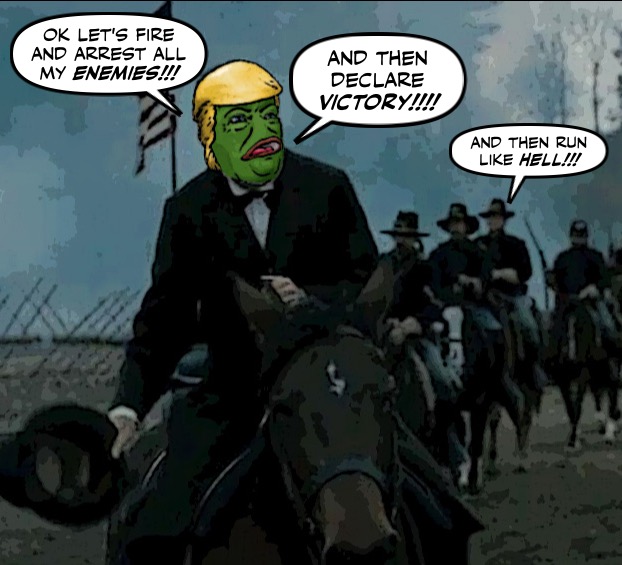 This investigation is in the early stages, but Trump has no plans to wait for it to either condemn or clear him. He is taking a much more aggressive approach, one that in the end may do more harm than good. He is attempting to defame, discredit and delegitimize.

Trump knows that whether anything from this investigation sees the light of day in a court of law, the investigation is already being litigated in the court of public opinion. In that court, he’s already guilty.

Trump’s public petulance about being mistreated is in fact a public appeal, in order to rehabilitate his brand.

I wonder whether Trump's pathetic attempt to cast himself as a victim, isn't just preparing the ground in case he needs to resign, in a hurry... 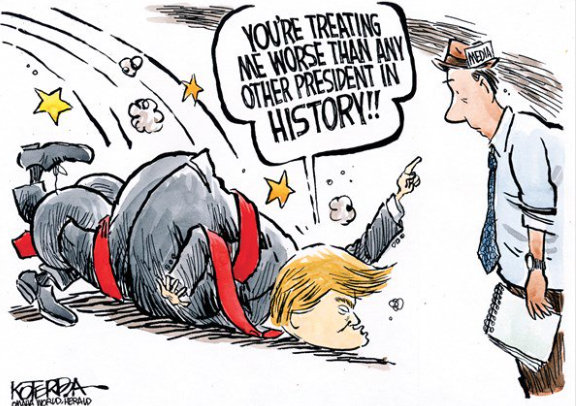 Because in that regard I find this paragraph in this story fascinating.

The president, who friends said does not enjoy living in Washington and is strained by the demanding hours of the job, is motivated to carry on because he “doesn’t want to go down in history as a guy who tried and failed,” said the adviser. “He doesn’t want to be the second president in history to resign.”

For it only confirms other reports that Trump's enthusiasm for the job is also fading fast. And if that is the case, I can see him walking away from that job long before he is impeached.

I know that sounds far fetched, but it's a gut feeling I have, along with this one... 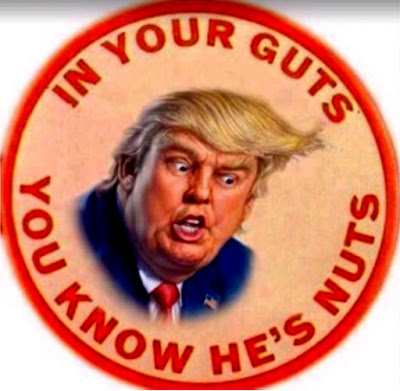 And remember that for a billionaire like Trump, living in the White House might be seen as a step down... 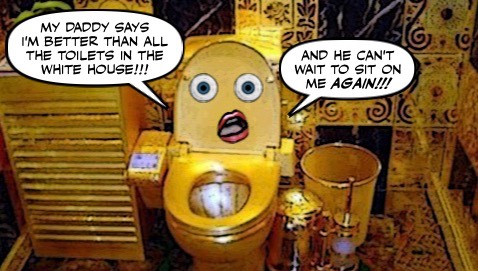 And at the age of 71, and already showing signs of dementia, he will eventually have to decide whether he wants to spend his few remaining years playing president, or playing golf.

And I think I know what he will choose, now that the glow of that golden escalator has faded, and Americans have seen the real Trump.

As Homer Simpson warned we would...

It won't happen overnight, it will be a war of attrition.

But after only five months Trump has shown us why he never should have been elected president.

And sooner or later he will end up in the garbage can of history... 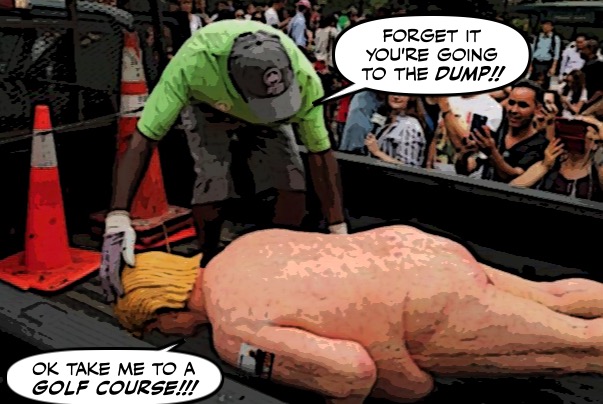 The NYT and Associated Press are fake news, the Rasmussen poll is way more accurate.

Media that gave Hillary a 99.99 percent chance of winning the election Ha!

Do you remember the last manifestly stupid and incompetent US president whose agenda was stalled and whose poll numbers were in the crapper? I do. I also remember the country rallying behind him as he became a "war preznit" by attacking a country that had done nothing at all to the US. I then remember that incompetent shitheel and his band of corporate grifters getting elected for 4 more years and destroying the economy.

A U.S. Navy F/A-18E Super Hornet from Carrier Air Wing 8 on board the USS George Bush shot down a Syrian Air Force Su-22 ground attack aircraft near Raqqa, Syria after the aircraft struck ground troops in Ja-Din, south of Tabqah, near Raqqa.

According to most sources it is the first time a U.S. combat aircraft has shot down a manned enemy aircraft in aerial combat in nine years.

BREAKING: Russia says it will treat US-led coalition planes in Syria, west of the Euphrates, as targets after US downed Syrian jet.

I don't think Trump will be leaving the WH anytime soon.

He can't quit. Bannon, the master of the sock puppet we call Trump, won't let him quit before he rams through Bannon's desired changes to invoke his conspiracy-infused world view.

Hillary won the election, just did not win the electoral College.
A news source includes answers to the questions Who, what, where, how, and why, anything beyond those questions can be considered opinion, which is not news, and likely prejudicial. Many sources start out with preconceived answers, and tailor the news to fit into the opinion of the presenters.
The Rasmussen polls are controversial because of their methodology in their sampling, although they tend to show only a slight bias towards Conservatives through elimination of young who do not vote, and haver cell phones . This tends to skew polls towards a more biased sampling of those surveyed. Based on sampling by Nate Silver of NYTimes.

hi MC...when I read your comments these days I don't know whether to laugh or groan. Are you seriously suggesting that Rasmussen, which might as well be run by the Trump brothers, is right and all the others are wrong?
That is the kind of fanaticism I would expect to find in North Korea. Face it, Trump is trending down, and heading for a hard landing....

hi anon 7:34...thanks, I knew something was wrong with Rasmussen but I didn't know what. Any organization that ignores the young, who are voting in ever greater numbers, is in my opinion totally out to lunch...

hi anon...actually I think that incidents like that one can only increase the pressure to evict Trump from the White House. The Russians are threatening to shoot down American planes, and Trump is being investigated for being too friendly with them. That's not just outrageous, that's treason... ;)

hi CuJoYYC...I don't doubt that Bannon would do anything to stop Trump from quitting, for who else would invite that grubby maniac into the Oval Office. But from what I hear Bane or Bannon has annoyed his master so much recently, he may be forced to quit before Trump does...

hi Steve...well I beg to disagree. I think the Trump Family Story should not just end in prison, it should continue in the pen for years. I understand Trump's inner circle spends more time fighting themselves, that they do fighting the Democrats. So give them a few shanks and it could be really bloody... ;)

hi David...yes it is bizarre. I watched two interviews with his lawyer, and he might as well have been a parrot. But of course the good news is they must be desperate to have that lawyer parade around shouting Trump is not being investigated, when Trump himself claims he is. And Conway the clown now claims that her master was just being "ironic." Anyone who believes anything they say must be as crazy as Trump....