Donald Trump and the Day of the Comey 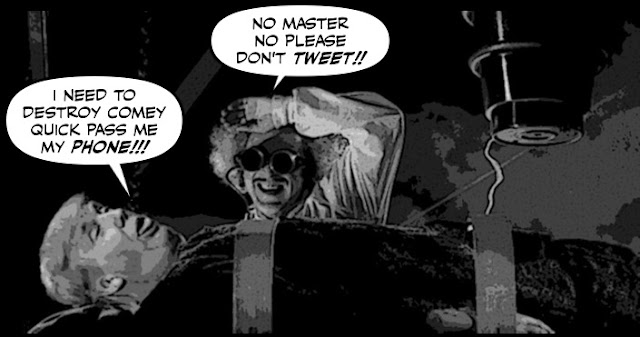 I'm sure Donald Trump's White House minions are doing their best to prepare him for James Comey's Senate hearing today.

But it won't be easy, because it's going to be a big event.

So while Trump is threatening to live tweet the hearing, other Republicans are doing their best to discredit Comey.

But sadly for Trump and his Trumpanzees, it's probably not going to work.

Not when they're brought to us by a Super PAC headed by Rudy Giuliani and Newt Gingrich.

And not after the devastating report that Comey released yesterday.

From his first days in office, President Trump repeatedly put pressure on his F.B.I. director, James B. Comey. He demanded loyalty. He asked that an investigation into an adviser be dropped. And he implored Mr. Comey to publicly clear his name.

As Mr. Comey described Wednesday in written testimony prepared for the Senate Intelligence Committee, Mr. Trump’s entreaties continued for months, in unexpected phone calls and awkward meetings. As Mr. Comey’s discomfort grew, so did the president’s persistence and his frustration with Mr. Comey’s unwillingness to help.

Which makes it only too clear why Trump fired Comey... 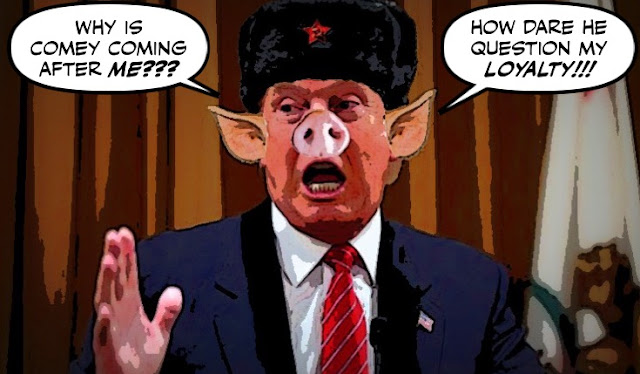 It makes it even more likely that the burning question of obstruction of justice will come back to haunt Trump.

Former FBI director James B. Comey’s highly anticipated appearance on Capitol Hill Thursday could bring the question of whether President Trump attempted to obstruct justice to the forefront of several wide-ranging congressional investigations.

Legal analysts said the testimony adds detail that would beef up an obstruction of justice case.

For as Charles Blow writes, the portrait it paints of Trump couldn't be more devastating.

It is hard to calculate the grievousness of the wounds that James Comey’s testimony will inflict on Donald Trump.

Trump’s comments as alleged in the Comey statement make Trump sound more like a mob boss than the president of a democracy.

And while I'm not sure that acting more like a mob boss than a president will hurt Trump in 2017 America, hookers could kill him.

“According to Source D, where s/he had been present, TRUMP’s (perverted) conduct in Moscow included hiring the presidential suite of the Ritz Carlton Hotel, where he knew President and Mrs. OBAMA (whom he hated) had stayed on one of their official trips to Russia, and defiling the bed where they had slept by employing a number of prostitutes to perform a ‘golden showers’ (urination) show in front of him.”

And I definitely agree with this:

I don’t know if the president will ever be charged with a crime. I don’t know whether he will eventually be impeached.

But I am absolutely sure that the picture emerging of Trump’s predilections and peccadilloes reaffirms and strengthens my view of him: He is thoroughly unfit for the office and a stain on this nation and the world. Trump should not be in a mansion with white columns, but in a cell with black bars.

Trump is approaching his moment of judgement... 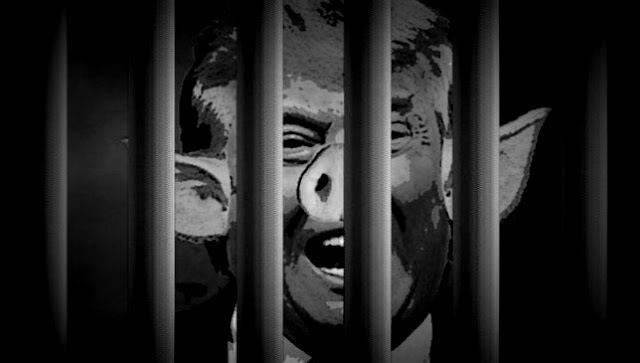 And as Samantha Bee points out, the story of Trump and Comey is now so hot.

I wouldn't miss this show for ANYTHING...

You know, I thought the Hookers in Moscow[1] story seemed a bit much even for Trump but if it was the presidential suite where the Obamas had stayed, humm, I may have to reconsider.

It is hard to tell just how badly Comey's testimony will damage Trump among his core and the scumbags, err, Republican legislators in Washington. They seem willing to do just about anything to hold onto power and I guess they think keeping Trump is better than purging him.

I suppose that their calculation is that Trump's base would turn on them. I am at a lose to think of any other reason for keeping him.

Trump may have been right. He could walk out onto 5th Ave and shoot somebody and get away with it. Well as long as the jury was composed of Republican legislators

[1] Might be a good title for a spy thriller.

hi jrkrideau...I don't know if that story is true, but Trump strikes me as a pervert, so I think anything is possible. I also have no idea whether Comey's testimony will have any effect on his fanatical base. But Comey has a certain Boy Scout look to him, so maybe more of them will start to ask who would you trust, Comey or the serial liar Trump?
He has a 35 per cent approval rating right now, and if he loses a few more points the Republicans in Congress will start to panic...

hi anon...well he certainly sticks out in a room, being about three feet taller than anybody else. And with a few more aw shucks he could probably make a good Jimmy Stewart. Let's just hope the Trumplings are as impressed as you... ;)

Below are the 9 questions Trump could -- and should -- be asked this afternoon.

1. "Did you record anything? Are there tapes?”

Trump: I could 'shoot somebody and I wouldn't lose voters'
http://www.cnn.com/2016/01/23/politics/donald-trump-shoot-somebody-support/index.html


[Even after James Comey’s June 8 testimony, I think if Trump suddenly pulled out a handgun and shot one of his staffers, folks such as Paul Ryan (and 99.9% of Trump voters) would just say “The President is new at this, new to government, and was unaware he is not allowed to shoot people.”]

COOPER: So other comparisons up. We have three people with us who would know better than anyone, Legendary Journalist Carl Bernstein, former Nixon White House Counsel John Dean, and former Watergate Task Force Richard Ben-Veniste. Carl, is this bigger than Watergate?

CARL BERNSTEIN, CNN POLITICAL ANALYST: I don't think the question is bigger, I said as you know that in some ways this could be worse than Watergate because it is about undermining our electoral process by a hostile foreign power and destabilizing our most basic institutions, which are free elections.