Theresa May and the Nasty Bigot Party 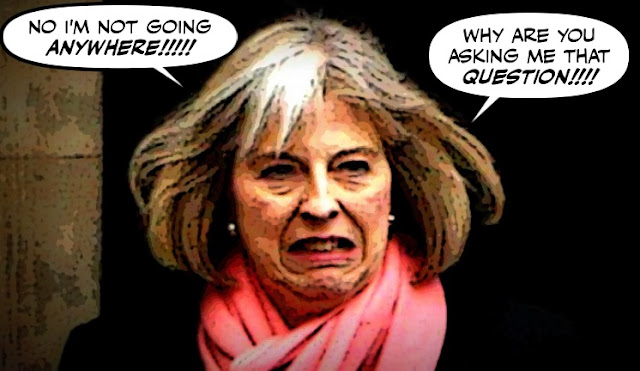 Uh oh. Somebody call a tow truck. It seem that Theresa May isn't going anywhere.

She may have been humiliated by Jeremy Corbyn, she may have lost all those Tory seats.

Some of her Cons are drawing straws to see who gets the honour of stabbing her in the back.

But she seems determined to try to cling to power, with the help of a nasty little gang. 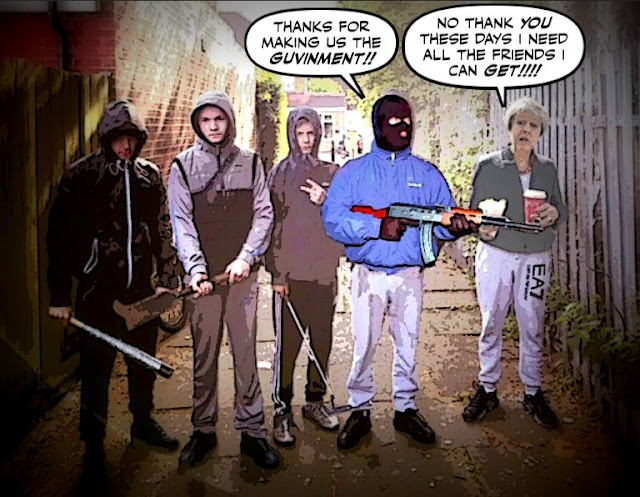 Theresa May has said she will put together a government with the support of the Democratic Unionists to guide the UK through crucial Brexit talks. Speaking after visiting Buckingham Palace, she said only her party had the "legitimacy" to govern, despite falling eight seats short of a majority.

Claiming it would be a marriage made in heaven, despite the DUP's extremist views.

The party, which returned 10 MPs to Westminster, has garnered a reputation for its strong, sometimes controversial views. It opposes same-sex marriage and is anti-abortion - abortion remains illegal in Northern Ireland, except in specific medical cases.

One MP is a devout climate change denier, while a former MP once called for creationism - the belief that human life did not evolve over millions of years but was created by God - to be taught alongside evolution in science classes.

And its strong links to protestant paramilitary groups... 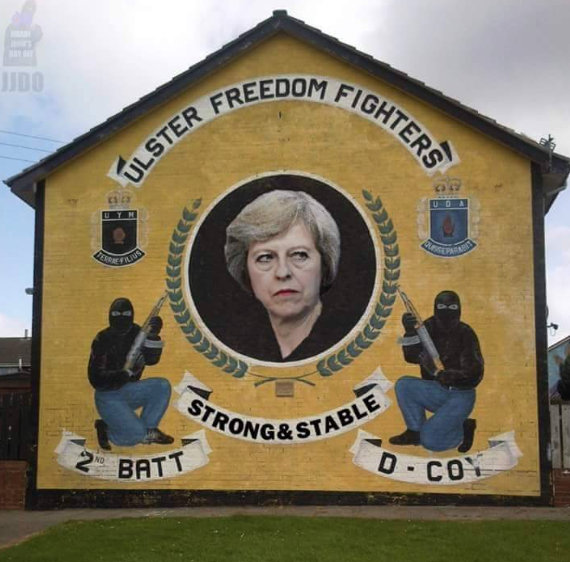 During the election campaign, the DUP's Emma Little-Pengelly was endorsed by the three biggest loyalist paramilitary organisations.

And while I'm quite frankly delighted to have May and her Cons linked to an anti-women and anti-gay /terrorist party like that one.

I'm not surprised that Ruth Davidson, the lesbian leader of the Scottish Cons, does not share my enthusiasm... 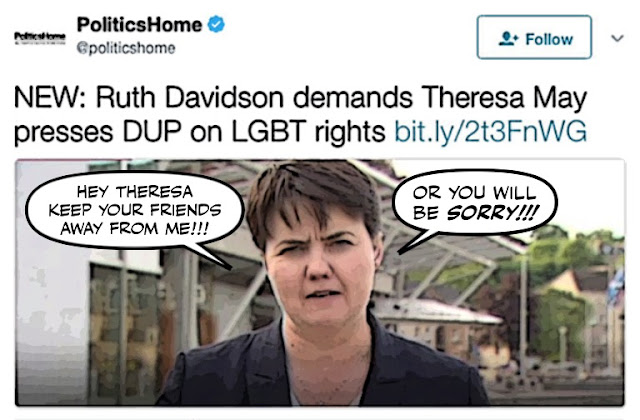 And is claiming that May has assured her that gay rights won't be eroded.

The Scottish Tory leader said she had asked for, and received, a "categoric assurance" from Mrs May that any arrangement between the Conservatives and the DUP would see "absolutely no rescission of LGBTI rights in the rest of the UK".

And she said the prime minister agreed to try to use her influence to advance LGBTI rights in Northern Ireland.

But sadly for poor Ruth, the DUP is the kind of party where one of its MPs Jeffrey Donaldson, can cheerfully compare gay people to the Shankill Butchers.

With 19 murders between them, the Shankill Butchers were the most prolific gang of serial killers in UK history. During the dark days of the Troubles, their savagery stood apart, paralysing both communities in Northern Ireland with fear.

As only a religious fanatic or a bigot could.

So all I can say is good luck with that one.... 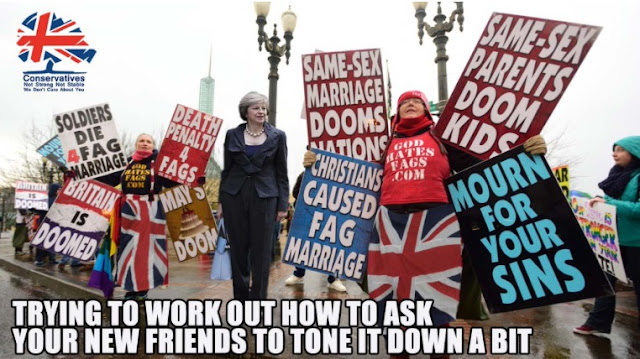 Or should I good luck Theresa, and bye bye Ruth.

She won the Cons 13 seats in Scotland but her party will not hold them for long.

For no party can last long with the support of people like the DUP, lest the stench of their bigotry cling to them.

There will be another election in less than a year, and this time the Cons will finally be driven from power to the great relief of even the Queen...


You know, during the campaign Theresa May was asked what was the naughtiest thing she had ever done.

And after thinking it over for so long you could hear the rusty gears clicking in her head, she replied that she was still guilty about having run through fields of wheat when she was a child. 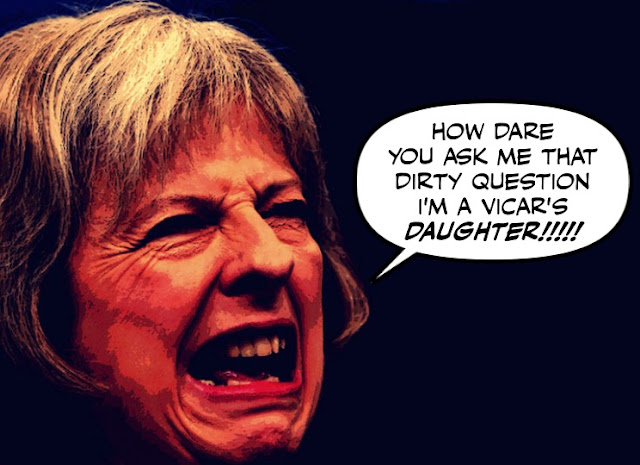 Her response, when it came, began promisingly – then plummeted off a cliff.

“I have to confess, when me and my friend, sort of, used to run through the fields of wheat – the farmers weren’t too pleased about that.”

And yes, her answer couldn't be more lame.

But then so is Theresa May.

Now she's galloping into a burning wheat field with a bigot sticker on her horse's ass... 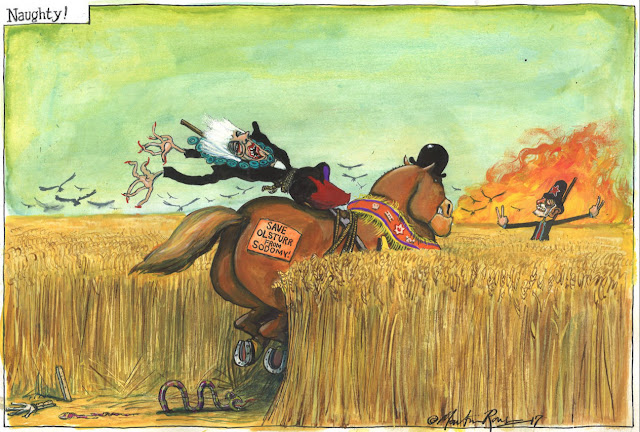 Her fevered dreams have become a nightmare.

She's neither strong, nor stable.

And she won't be with us for much longer...

Yes, how can they accuse Corbyn of "supporting" the IRA and then form an outright coalition with the butchers on the Protestant side?

Simon, are you saying that you think some of the Scottish Cons may break with party?

Because Cons are hypocrites and many still think that violence towards Irish-Catholics is acceptable.
They also fear mongered about the SNP as well only to end up in bed with the DUP. Amazing.

Sounds like the DUP is a great group of chaps. Hopefully they can bring gay rights back 50 years.

This alliance will do untold damage to the Tories.

Looks like Ms. May took a page out of Christy clark's book, no true majority but refuses to leave the office. Expect another election in G.B. shortly. The Northern Ireland group have an agenda which is not consistent with that of the Conservative Party and one could expect Theresa to be out of a job shortly. In G.B. unlike in Canada its the M.P.s who decide who is the P.M. ought to be another fun show.

People Like Theresa May and Christy Clark want to hold onto power at all costs. sort of like Trump.

hi lagatta... the IRA was always made to appear worse than the Protestant paramilitary groups, some of whom worked closely with the police and the British army. But those Protestant groups were rabidly sectarian and capable of the most horrifying violence. And to this day they remain a threat...

hi anon...exactly, I always supported the Catholics in Northern Ireland even though I'm a Protestant, because they started the so-called troubles with their anti-Catholic bigotry. I will always remember spending the night in a protestant neighbourhood in Belfast the night before the orange parade as one of the scariest nights of my life. With drunken louts dancing drunkenly around a huge bonfire, and kids as young as ten telling me how they couldn't wait to kill Catholics, or Taegs as they called them...
How I got out of there alive I have no idea.

hi jrkrideau...what I'm trying to say is that some of those new Con seats may not survive another election, if the SNP makes it clear it will hold off on calling another referendum. The new areas the Cons captured just happen to be the northeastern part of Scotland that I know the best. And while what's left of the fishing industry may have voted for the Cons because they hated the EU for imposing quotas, most of the others voted just to stop a referendum. All of the older members of my family did that, and so strong are feelings about that, we don't talk politics around the dinner table. The Moray, which is where I'm from, actually threw out the Deputy Leader of the SNP Angus Robertson who is an excellent politician and replaced him with a young Con, even though the area was always considered part of the SNP heartland. With the exception of some labour seats in Glasgow where I'm sure Corbyn's message resonated with the young, it was all tactical voting. And the situation was also distorted by the fact that the Scottish Parliament is seen as the country's real government, very much like many Quebecers consider the National Assembly their real government. I'm going up to Scotland in a few weeks, and I'll have to restore order... ;)

hi anon...dream on, I wish they would try to interfere with gay rights because that would really hurt the Cons. But they don't dare, and will instead try to force May to work on problems like the border. Not having a border between Northern Ireland and the South is a very big thing for both of them, and putting one back up again would be a real disaster...

hi RT....well with Lynton Crosby in charge of the campaign you know that fear is going to be front and centre. He made his reputation in Australia that way, it worked for him with Cameron, and with tensions running high he couldn't resist. What impresses me about the Brits is that despite two terrorist attacks they did not panic and vote en masse for May. But of course, when I hear people say that Scotland saved the Cons, I am totally gutted....

hi Gyor...I hope so, I can't see how anyone can deal with those DUP nutters. Remember, this is the party who expelled their founder the reverend Ian Paisley for agreeing to take part in a power sharing arrangement with Sinn Fein. They are really hardline, and the more the Tories cohabit with them the more damage they will do themselves....

hi e.a.f... the only thing May has going for her is that after a referendum and two elections in such a short time, another election is the last thing most people in Britain want. But I can't see how she can hold her loose coalition with the DUP together for more than a year. And remember if the Brexit talks go sideways many of her own Cons will stop supporting her, so it's a real mess....

I agree, Simon. Ever since I was quite young I've had difficulty squaring the whole notion that the IRA was the worst player in Northern Ireland. Not condoning their violence, but the Protestants were even worse.