Is Donald Trump Just Too Stupid To Be President? 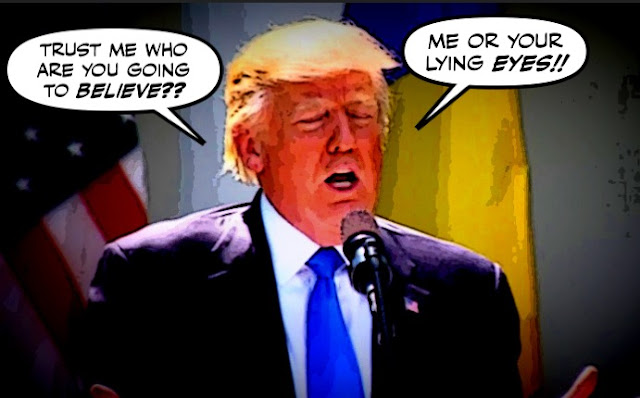 I must admit that when I saw Donald Trump holding a rare news conference yesterday I was absolutely shocked.

Not just by the way he looked, like a man about to keel over.

But also by the crazy things he was saying.

Or blowing out of his pie hole. 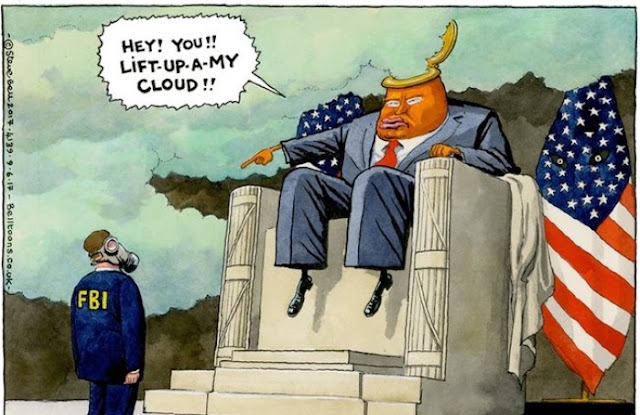 Which couldn't be more deranged or more damning.

A defiant President Trump on Friday accused former FBI director James B. Comey of committing perjury in his blockbuster Senate testimony and said he was willing to share his version of events under oath with the special counsel overseeing the expanding Russia investigation.

“No collusion. No obstruction. He’s a leaker,” Trump said of Comey, adding: “We were very, very happy, and, frankly, James Comey confirmed a lot of what I said. And some of the things that he said just weren’t true.”

For does he seriously think that Americans will believe that James Comey is more of a liar than he is? 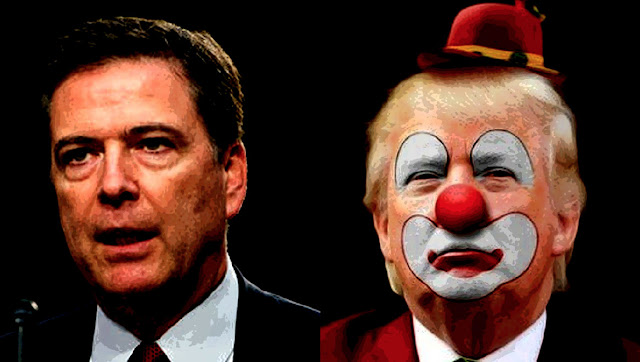 When Trump holds the world record for lying like a thief.

And doesn't he understand the danger of making people think that he may have taped his conversation with Comey?

Trump emphatically declared his innocence yet refused to solve a mystery of his own making by stating whether he has tapes of his one-on-one conversations with Comey. Any such recordings could prove which man’s account is accurate, but the president played coy, saying he would wait “a fairly short period of time” to tell the public whether tapes exist, as he first suggested they might in May.

When if the tapes do exist, they could be subpoenaed and could do to him what they did to Nixon? 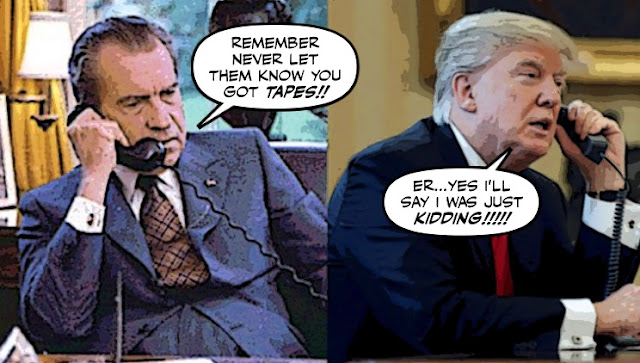 Or that if he later admits they don't exist, he could be accused of destroying evidence and obstructing justice.

Which is the charge he's trying to avoid.

Oh boy. I know as Gail Collins writes, that when Trump or Twitler talks America trembles. 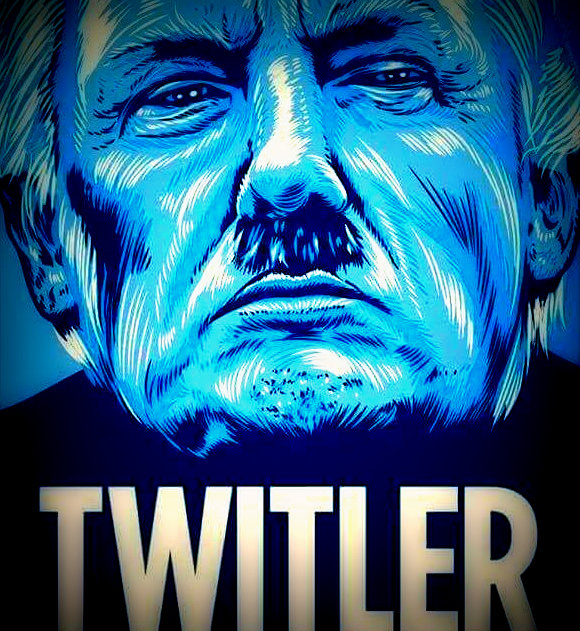 You know, it might be less terrifying if Donald Trump had cannily tried to obstruct justice, plying his F.B.I. director with flattery and carefully scripted suggestions. At least we’d think he had some control.

Instead, we know the country’s being run by a guy who wanders around in an ego-filled cloud, saying whatever the heck pops into his head. It’s a combination of id, ineptitude and bad intent.

He has a minimal ongoing relationship with reality, let alone truth.

But how much of the above is bad intent?

And how much of it is Forrest Trump?

The bottom line here is that our president appears to be unnervingly loony. Not just in the normal political way, with bad judgment or an overblown sense of importance. Loony like your cousin Fred who lives with his mother and isn’t allowed out of the house with more than $2 in pocket money.

And is he as Bill Maher suggests, just too stupid to be president?

I must confess at this point I have no idea whether Trump is a malignant tumour growing on the presidency.

Or whether he is just too dumb and dangerous to be president.

And he will end up in a place where he can do no more damage... 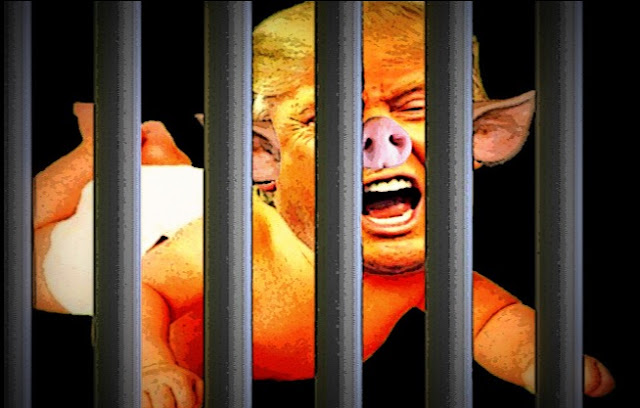 Trump is playing to his base and they will believe him. A great number of Americans just don't care. They too involved trying to keep their heads afloat and keeping up with life. if you look at how low the percentage of people who vote is, Trump is doing just fine with his base and that includes the Republicans in Congress.

Now there are those of us who think he is looney toones and find it all very entertaining, its like watching "the trump show" during the day and at night its Stephen Corbet, Trevor Noah, and Seth Myers. Then it starts all over again in the morning.

it is doubtful the man plays with a full deck. He lurches rather than walks, if he weren't the president of the U.S.A. his family might have him committed but hey, he is the President and will most likely be for at least the remainder of his term. We need to get used to it. Build up our armed forces as should Europe and Japan. We can not count on the U.S.A. for anything.

We might as well approach international affairs as the U.S.A. is a non entity as long as Trump is the president.

Personally I am voting for the "too dumb and dangerous" option but it is also a structural problem with the US gov't. It imitates a 17th century model of government that most advanced countries have abandoned.

I mean, there are five hundred to a thousand senior civil servant positions (or whatever the US calls them) that are presidential appointments after an election. No wonder the Americans think government does not work. They deliberately destroy it.

The real worry with Trump is what he may do to the rest of the world.

This is when one appreciates a parliamentary democracy and a permanent civil service.

Trump would have been booted weeks or even months ago in any reasonable system.

Mental cruelty and the unarmed man.

It appeared that Trump's right arm was shaking as he hunched over and dug his little fingers into both sides of the lectern. Hopefully, that personal physician who determined that Trump was the healthiest man in the world was watching.

We've got to give him credit for having whatever it takes to continue showing his face in public.

What's it going to take for his supporters who aren't on the payroll to start cringing?

hi e.a.f...well the last I saw polls approval rating was only 34 per cent, so he is losing the support of at least some of his base. I think what happens in the 2018 mid term elections will determine Trump's fate. If most Republicans can hold on to their seats he might be able to complete his term, but if many lose their seats panic will set in, and that's when Trump will be vulnerable to being impeached....

hi jrkrideau...yes, that's a very good point. A permanent civil service would provide some stability, and to make matters worse Trump has made no effort to staff many of those vacant positions, so the U.S. government is really running on empty. And yes you're also right, the real danger is what Trump's ignorance could do to the rest of the world. I read somewhere that he joined the Saudi crusade against Qatar without even realizing that the U.S. has thousands of troops there. A man making that mistake is capable of anything...

hi John...the U.S. is now so polarized it's almost impossible for people to switch sides. I believe many of his supporters are so desperate, and want to believe in him so much, they will never abandon him. America made its bed and now it will have to lie in it. But there will be a day of reckoning and it will be brutal....

hi anon...are you talking about Trump or my post? ;)

Let us remember that there are also fifty state governments in the U States of A.

The Electoral College is a vestige of slavery.

http://www.smithsonianmag.com/history/electoral-college-has-been-divisive-day-one-180961171/ There are many articles if you google "electoral college slavery"; I thought the Smithstonian's was one of the best of the short ones.

Slavers didn't consider Black slaves human, but still wanted them to be counted on the same basis as free people. (Remember of course that no woman could vote either - I don't remember what property restrictions on suffrage existed in the US at the time, but they certainly existed in the UK, and heroic struggles were waged against them).

What a pathetic performance by Comey. How in the hell did such a man become an FBI director? Oh, now I remember. He was a clerk for the Deep State all along. His job was to protect the swamp. He was ordered to let Hillary off the hook.

Comey began by helping the Clintons escape Whitewater charges when he was a deputy counsel for a special Senate committee that was investigating the crime. Er, ‘the matter,’ as Comey probably saw it. Comey then went to Lockheed Martin, where he amassed a $6 million fortune before he left in 2010. That’s quite a reward.

He was appointed FBI director by Obama in 2013. Barry must have known that Comey was already compromised and would do the globalists' bidding. He was right. He let the arch criminal Hillary off the hook again by claiming she had no ‘intent,’ even though she lied about her email and the leaking of classified information from her illegal server. She obstructed justice by destroying evidence. Instead of going after Hillary, he granted her operatives immunity in the investigation, er, ’the matter.'

The hearings revealed Comey to be a weak, lying, wormy mound of quivering jelly. His investigation against Trump for supposedly colluding with Russia? It was all based on lies, hearsay and fake news. Comey admitted there was no evidence, yet he continued to spend taxpayer money on pursuing a case. He said he operated by a ‘gut feeling’ with Trump. In other words, the Deep State ordered him to drum up an investigation based on fake leaks and anonymous sources. Comey himself admitted to leaking information. He also admitted “The New York Times” was publishing fake news. Instead of investigating a real news story such as the murder of Seth Rich by the Deep State, the legacy media were busy concocting lies about Trump and Russia. On orders from the Deep State, of course.

President Trump’s decision to fire Comey was spot on. The first step in draining a swamp is to stop the toxic leaking, lies and corruption that help create one in the first place. The FBI, CIA and NSA should all be answerable to the president, and he should be able to fire anyone in those agencies. We The People should have ultimate control over such bureaus through the elected president. Otherwise, said agencies can go rogue while hiding under 'national security’ secrecy every time. That’s not right. We The People demand accountability. Otherwise the agencies can aid and abet criminals. You know, people such as Comey who let their shadow government comrades off the hook every time. It’s too bad Trump doesn’t fire the entire NSA outright for illegally spying on the American people, but firing Comey is a good first step.

Trump has been exonerated. Comey, the fake news mainstream media, and the Deep State have been humiliated. The swamp has just been drained slightly, thus opening up a path to bring Hillary to justice.

Sorry, I was referring to "blowing out of his pie hole." You may remember Trump talking about “the most beautiful piece of chocolate cake” as he ordered air strikes on Syria during a meeting with Chinese President Xi Jinping.

What planet are you living on? Is it in this galaxy?

he does have the perfect deep state resume

Is that the same Anonymous as the Québec-bashing one?

Comey is a real man and sexy as all fuck. Man babies with tiny penises don't understand his quiet strength. Boa-constrictor cock on that man.

Some great replies here especially the reference to tiny hands. Anon 11:14 obviously has a very biased over simplistic view especially the one that the president should have power over the total government. That's called a dictatorship but the simple thinker probably figures they can vote him out with guns if they don't like him.
RT

Believe me: Should we take Trump at his word?
https://www.youtube.com/watch?v=1q4_sVysd2c

What We Now Know From James Comey | The Resistance with Keith Olbermann | GQ
https://www.youtube.com/watch?v=0rXQ7D19mhY