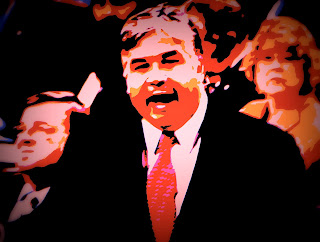 If anybody still thinks that the Con regime is not out of control, the sight of Peter Van Loan in Question Period today should have been enough to cure that delusion.

For there was Tubby, as his friends call him, filling in for Stephen Harper, clutching a piece of paper with his scripted lines marked with a yellow highlighter.

In a Parliament  transformed into a fascist circus, where the Con monkeys chant in unison, and fling their talking points like fecal pellets at Tom Mulcair.

In the two days since the Commons returned, MPs, ministers and the prime minister himself have popped up from their seats, all of them resembling a message track Jack-in-the-Box, spouting “carbon tax.”

Harper even took the unusual step of switching from French to English in answer to a question from Mulcair so he could blurt out “carbon tax” in English.

It's a bizarre and frightening spectacle. The repetition of a Big Lie to confuse and fool the dumb and the distracted. 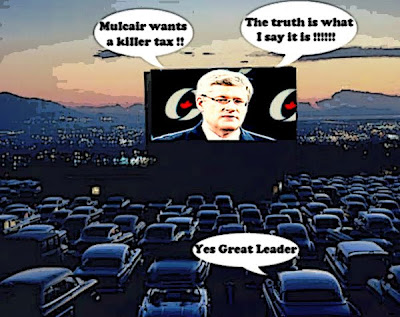 It works on those whose lives consist of early mornings, packing school lunches, long work days, sprints to the after-care program at the school, then an evening on the soccer pitch or at dance class. They absorb their politics in snippets, by osmosis and repeated talking points, television ads played over and over until a perception sticks.

It works because it gives the party so-called “free media,’’ by engaging journalists who write about a non-issue because it fills a void, it creates debate because it has been injected into the national dialogue by the governing party.

It's outrageous, it's depraved, it's intolerable. It's the death of democracy by a thousand insults. But even in the horror and weirdness that is Ottawa today, there is some good news.

If the Con monkeys think they can bully Tom Mulcair, by flinging their poop at him, they're in for a horrible shock. 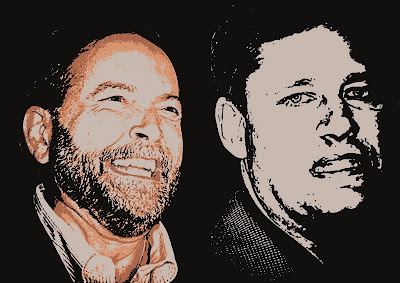 What’s becoming clear already, though, is that this tough politician—his roots so deep and complex—might just have what it takes to withstand Stephen Harper’s efforts to tear him down long enough to make theirs the sort of rivalry that could define a political era.

Because he's my kind of guy eh?

Carpenter suggests Mulcair’s staunch commitment to anyone who’s stuck with him is the flip side of his determination to crush opponents. “If he’s your friend, he’s the best friend you ever had,” he says. “And if he’s your enemy, you don’t sleep well.”

And watching him go after Stephen Harper with the cold fury only he can muster, is truly a thing of BEAUTY.

And an example for us all. 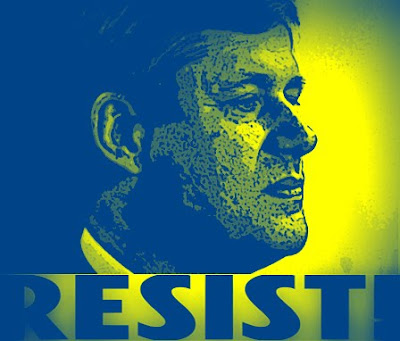 Hey Simon,
You might have noticed that Harper skipped question period to let Tubby do his talking points on Wednesday. He was available, however, to rejoin the monkeys as soon as question period was over, so that he could shake hands with our Para Olympians.
Maybe Steve is leery of the criticism he's been receiving in the press for joining his monkeys in the poo flinging antics. But it's dangerous to give answers to well formulated questions on ones shoddy accomplishments.

Don't worry, Mushy Muclair will soon get his. After all if Martin, Dion, Iggy and Layton got crushed.....well......not much hope for neck beard is there?

Just wait until the Harper CONS vote to KEEP their big fat pensions. The LIBS say if the CONS would table pension reform separately, the LIBS would agree to FAST TRACK the pension reform to becoming reality. And the NDP would agree. And so would all Canadians. The CONS say NO, however, they WILL NOT table pension reform separately, and will ram it through in the the 600 page omni-shit bill, which is chock full of all kinds of crap the CONS are afraid to debate or let Canadians know about. And when the opposition rightly opposes the giant omnibus bill load of bilge, the CONS will holler 'the NDP opposes pension reform!' Yes, that is exactly how stupid the CONS think Canadians are.

And yet they have the majority? How that does feel Dave? Does make you want to cry? Does make you wish Whacky Jacky was still here to wipe your tears......oh oh oh poor little lefty....lol.

@ anonymous - The majority of SEATS. Based on about 25% of Canadians (who actually voted) voted for these turkeys. Only in Con-world is 25% a 'majority.' And enjoy it while it lasts because Mulcair is going to chew Harper and his lying Cons apart and spit them out, if the courts don't do it first over robo calls. And it goes without saying you are one of those rightwing Con dimwits who thinks a 'carbon tax' is the same as 'cap and trade.' And are too daft to know the NDP platform is for cap and trade, not a carbon tax, and has been since the 2008 election at least, when the NDP ran cap and trade against Dion's carbon tax - just LIKE THE CONS DID! CON Jim Prentice even went to Oilberta at the time to try and get that oily province onside with the Con cap and trade policy! Harper even spoke of cap and trade as part of his THRONE SPEECH. Now do you understand why the CONS cannot attack the NDP for 'cap and trade?' Because until a couple years ago it was in the CONS own platform, too! So, instead, the Harper Cons LIE and say the NDP is for a 'carbon tax', which is nothing but a steaming pile on Connie horseshit. And the 75% of people that did NOT vote for these Con douchebags KNOW THIS. But the Harper OilCons spew their lies anyway, because they know their base, morons like YOU, lap it all up gleefully because you haven't a fucken clue of the difference anyway!

"Don't worry, Mushy Muclair will soon get his. After all if Martin, Dion, Iggy and Layton got crushed.....well......not much hope for neck beard is there?"

Um anon 2:36 something is missing in your mind?

hi anonymous...yes I noticed that, and how he would rather hand out his tin Jubilee medals instead of attending Question Period. I must say after his antics the day before, I was disappointed to see he was not there. Until I saw Tubby Van Loan in action, and laughed so much I almost fell out of my chair. With enemies like him how can we lose?

hi anonymous...didn't you read that long article on Mulcair. Or see the headline on the print edition?
Stephen Harper Has Met His Match.
When it comes to a wrestling match Neck Beard is going to bounce Jelly Roll right out of the ring...

hi Dave...I think that's what shocks me the most about the Cons these days. How stupid they must think we are, to think that they can do what they are doing and get away with it. And how wrong they are. But then it was Preston Manning himself who sounded the first alarm, when Harper was working for him in Ottawa. Before he had his breakdown and returned to sulk in Alberta. The Parson said Stephen thinks he knows better than anyone what to do, but he doesn't.
And he hasn't changed a bit, except that now none of the Con sheep dare tell him the truth, so he's out of control. I am more and more convinced that the man will defeat himself. And if he doesn't we surely will....

hi thwap....how can you say that? He was just handing out more of his tin Jubilee medals, that are worth in my opinion about the same as Molson Canadian bottle cap. And of course because he loves Tubby so much, he just wanted to give him an occasion to shine. And boy did he ever... ;)

hi Dave... I think you summed up the situation rather well:

Enjoy it while it lasts because Mulcair is going to chew Harper and his lying Cons apart and spit them out, if the courts don't do it first over robo calls.

You see I have seen Mulcair in action in the National Assembly and I assure you he takes no prisoners.
If Harper is looking desperate it's only because he fears him...

Neither does Harper, hope Muclair's health is better than last guy......no mercy indeed!

Just like the last bunch who tried? Can wait till after election 2015 when Muclair quits the day after and people like you will eat your words for breakfast.

And yet you Simon, year after year, election after election. Care to explain? We all know why, but I rather hear it from you instead? Why do you and those like you fail so often?

Just like the last bunch who tried? Can wait till after election 2015 when Muclair quits the day after and people like you will eat your words for breakfast.

Tsk, tsk. Let me guess, everyone who doesn't see the greatness of the left is crazy? You ought to put that on a campaign leaflet! I bet it will win a lot of support!

Anonymous, your skill as a blogger is likely as strong as your oratory skills, you would make a great backbencher - lobbing fact-less tripe in the assembly that aims to govern our nation. Please tell us about your ideas to stem the decline in the quality of life for the middle class or to turn the tide on climate change, better yet, something a true conservative would believe in - tell us about your ideas for making it possible for Canadians to thrive in single income families.