Crazy Religion and the Hatred that Kills 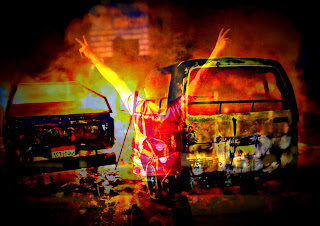 What with Christian extremists spreading hatred, and Muslim extremists on a rampage.

I was horrified to see that a Hindu extremist was trying to stir up trouble in Toronto.

And delighted to see that his plan to insult Muslims by parading dogs outside a mosque failed miserably.

A much anticipated dog walk protest outside an east-Toronto mosque Friday turned out to be a hopelessly neutered event.

“We wish we had a better turnout, but there were extenuating circumstances,” said organizer Ron Banerjee, citing traffic and rain for the poor attendance.

Towards the end, one Muslim arrived with two friendly Siberian Huskies.

Maybe next time that ghastly bigot should bring a bunny.

But seriously...what's wrong with these people?

Why is religion so often just another name for intolerance?

The Malaysian government has begun holding seminars aiming to help teachers and parents spot signs of homosexuality in children, underscoring a rise in religious conservatism in the country.

According to a handout issued at a recent seminar, signs of homosexuality in boys may include preferences for tight, light-coloured clothes and large handbags, local media reported. 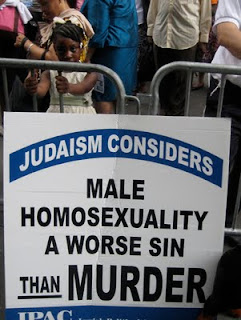 And the hatred that kills?

Always speak up and help someone who is being bullied. BUT… it’s not right to tell someone that being homosexual is okay. The person may be feeling sad because of being bullied, but never try to make him or her feel better by saying “gay” is okay.

And believe in a kinder, gentler world.

Damn those religious fanatics who would divide us.

Damn those bigots and those bullies...

Vote here to recommend this story at Progressive Bloggers.
Posted by Simon at 6:05 AM

Good morning Simon The problem with religion is that long ago evil people realized that it is a great tool for controlling and manipulating others and it will be ever thus.

I an not Muslim but if I lived in Toronto I would have shown up to support the Muslims. So tired of bullies.

thank god for atheitis. at least they don't go around killing people over religious reasons.

I have never understood this religious killing. It doesn't make sense if you read their "bibles". Religion has though become a very good tool to wage war on other people. I guess it started about the time religion started.

I consider many of these "protests" to be hate & should be dealt with as such. Peaceful protests are fine, that is what makes a democracy. Violent protests, not so much.

People can not expect others to hodl their religion above another persons rights to freedom of expression. Some one makes a crummy film, fine that is their right. then for others to say it should be against the law, well not in my world, thank you. As for idiots making the films & burning "holy" books, go find something else to do like helping the poor.

hi Kev...believe it or not when I was a young teenager I used to pray a lot, before a big soccer game, or a big exam. And although I never believed in heaven, I was willing to concede that religion could be a force for good. But not anymore, I have been scorched by its hatred, and now believe it's an obstacle to a better world

hi anonymous....yes, those bullies are hideous aren't they? Such nasty minds and so horribly ignorant.If I had known about it, I might have turned up myself. However it was in Scarborough, a far flung suburb of Toronto, so I probably couldn't have made it anyway. And I see the bullies made themselves look like idiots, so I didn't need to be there... ;)

hi e.a.f.....you know the funny things is that although I'm an atheist, I was raised to be a good Christian, to treat others kindly as I would want others to treat me, so these days I find myself in the awkward position of being more religious than the religious. ;)
My position is I want a kinder, gentler world. If religion can help us get there fine. If not it should take a hike....

I find the some of the things mentioned in that Malaysian pamphlet you cite just downright bizarre. How sad that people still accept stereotypes when it come to homosexuality. For crying out loud, do these government turds not realize how many people in their own countries wear bright clothing simply because it light material and better suited for a hot climate? Geez! Reminds me of seeing a Nigerian man in a restaurant with his family (all decked out in bright colours which far surpassed my style sense I should add) and I thought um yep, that guy must be gay. Sheesh!

Then too, my own brother, who's also gay, works for Apple in Ottawa. I guess these Malaysian government types either didn't want to or forgot to add "computer whiz" to their list since most of them also use computers.

When will the insanity end?!

As much as I think Ron Banerjee is an idiot and his 'doggie protect' was so stupid as to almost funny, his actions can't be equated with mobs going around torching embassies and other buildings.