Stephen Harper and the Invisible Tax 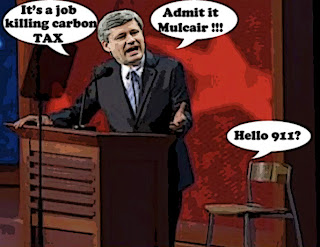 The more I think about it, the more bizarre and outrageous it seems.

Like Clint Eastwood went after an invisible Obama in the empty chair.

For let's face it, this is MADNESS.

And what I find even even more disturbing, if that's possible, is the lack of moral outrage in the MSM, and their failure to see the big picture.

For while they would tell us what we already know.

So, if the economy is the issue to watch, why is the government continuing with its attacks on the NDP over a non-existent carbon tax? Nanos says the "Conservatives are looking to define [NDP Leader] Thomas Mulcair in the same way they defined Stéphane Dion," referring to the way the Conservatives attacked the former Liberal leader and his Green Shift policy during the 2008 election campaign.

They won't call it what it is, a Big Lie. They won't question the fitness of the Cons to remain in office. And some like Andrew Coyne would even seek to diminish what they have done, by claiming they didn't invent attack dog politics.

This is not for one moment to excuse the Tories’ behaviour. Let me say that again: this is not to excuse the Tories. But there are no virgins in this whorehouse. To read some of the commentary of late, you would think that lies and personal attacks began with the election of the Conservatives — as if the Liberals had never run attack ads (“soldiers, in our streets”), or as if the NDP had never lied (as, for example, about their cap and trade policy). What is truer to say, these days at least, is that the Conservatives are better at it: more disciplined, more relentless, less daunted by shame.

Which while it may be technically true, fails to acknowledge the fact that no government in Canadian history has abused the truth, and our democratic system, as much as the Harper regime.

And comparing what they have done to what other parties did in the past is not only absurd, it borders on the insane. And only plays into the hands of the Cons, who are always claiming that the Liberals did what they are doing, so people think that all politicians are the same, and don't bother to vote.

Oh well. The good news is the Cons can get away with a lot of things. They can try to throw a carbon tax at Tom Mulcair like a big plate of spaghetti, and hope that some of it sticks. But they will not get away with calling Canadians morons.

These people will hear some noise and catch the gist: The NDP wants a new tax and Stephen Harper is against it.” Right. But there’s another gist to be proffered here. Stephen Harper says A; Stephen Harper now rails against NDP for also saying A. Sorry, but if that’s not an attack ad waiting to happen — punch line, “They think you’re morons” — we don’t know what is. 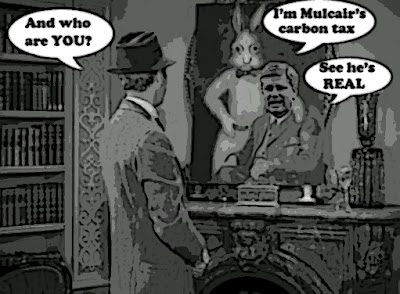 By the time we're finished with Great Economist Warrior Maniac Leader, he'll be wearing rabbit ears AND a straitjacket.

While we hold contests, like Easter egg hunts, to see if anyone can find his invisible carbon tax.

Golly. I just LOVE the punch line "They think you're morons."

But then there's this other one eh?

"Is Stephen Harper all THERE?"

About the m.s.m.--think conrad black and rupert murdoch. Does that answer your questions about the m.s.m.? harper is doing the classic tea-party, neo-con republican tactic of committing the crime and then saying the other guy did it to the point that the morons DO believe that what he said is true. It works in the u.s.all the time now. Just look at what they have to select from for their presidential candidates. One has failed abominably to fulfill almost any of ALL his great campaign promises and the other is basically promising to gut what is left of the 'murkan social network. "The lesser of two evils." That's what harper is taking from their playbook. To make what the fascist p.c.'s do here look normal to the morons that support him so as to hold power "to infinity and beyond!!!"

Simon I said Stephen closing the Iranian embassy was a prelude to war...

I'd personally like to kick Stephen in the ass he could have left the embassy open and moderated the situation but noooo Stevie boy does not know that the true true definition of a Semite is A MIDDLE EASTERN PERSON and NOT A JEW???

Go figure Stephen is dumber than...

Harper's best buddy Gordon Campbell, hit BC more than once with the carbon tax. They also scammed BC citizens with the HST, that wasn't on Campbell's radar.

Harper gives billions of our tax dollars to, corrupt greedy banks, mines, big business and Harper's favorite charity, big oil. He also gives them huge tax reductions. Harper thieves from us, to give to the wealthiest outfits in the world. Meanwhile, Flaherty has the gall to squeal, big business is sitting on all of the money. Then Harper should quit giving them, our tax dollars to sit on, Mr. Flaherty.

Harper lies so much, he never remembers the first lies, he has told the people. He is doing exactly what he used to preach against.

Harper should keep his big mouth shut and be thought a fool, rather than opening it, and removing all doubt.

Worked with Dion! Worked on Iggy too. Well let's make it a hat trick and zap Muclair as well. I wonder if he will step down the morning after 2015, just like the others. Ah well, all is fair in war.

hi anonymous...all you say is depressingly true, it is fundamentally a problem caused by ownership and class. Reporters are allowed to record the individual crimes, but not allowed to write about the pattern or fully describe the serial killer.
This problem is also exacerbated by the 24-hour news cycle, the short attention spans of our fragmented and distracted world, which allows the Cons a chance to repeat a simple focus group tested message enough times, until enough people believe it. What it also shows is how important it is to expose those Con lies, and how essential it for us to come up with a simple but powerful message to cut through the clutter...

hi Mogs...the situation in the Middle East couldn't be more ominous. We are at the mercy of two groups of fanatics, Netanyahu's settler regime, and the Mullah regime in Iran. I only hope that sanity will prevail, and that war can be avoided, because it would lead to certain disaster for both sides, and could very easily result in a superpower confrontation. Scary times indeed...

hi anonymous...I'm not saying that Harper is not playing with a full deck to insult him. I simply state it as a fact. His approach to governance, his psychopathic behaviour, his delusions of grandeur, the genes of his first ancestor in Canada who had to be removed from office for "vindictive behaviour beyond all reason." it all leads me to believe that something is not right....

hi anonymous...I grant you it worked on Dion and Iggy, but as I pointed out in my post, I've seen Mulcair in action attacking the PQ in the National Assembly. And if you called him Tom the Ripper you would not be wrong. I am no groupie for any politician, but I honestly believe Mulcair will make mincemeat out of Harper. But then as you say all is fair in war, and only time will tell...

I haven't seen him in action in Quebec, and don't care too either. But this is the big time and frankly Quebec politicians haven't faired well as of late. Muclair is new to the Federal scene and the learning curb is steep and unforgiving. Harper had a pro team with several elections under his belt, Muclair does not, nor has the NDP ever run the kind of campaign it will have to run in 2015. Muclair better learn fast, because Harper will not give him any breathing room at all. That I think we can both agree on.

harper is a stupid putz who had to resort to electoral fraud to avoid a prison cell.

his jig is up and all is NOT fair in democracy. he's going to die in prison.

Thwap, lol. He is going to die in jail? Must be nice in never going to happen land. Lol

Harper is a douchebag liar but it’s not like your average conservative knows the difference between a carbon tax and cap and trade, anyway. The NDP platform is for a cap and trade, not a carbon tax; and that's what the NDP ran against Dion's carbon tax. JUST LIKE THE LYING CONS DID. The fucking lying douchebag Cons THEMSELVES proposed a cap and trade policy up until 2009! Jim Prentice even ran to Oilberta to try and get them online with it! My question is when is Mulcair going to let Canadians KNOW THAT?