The Slow Degradation of Stephen Harper 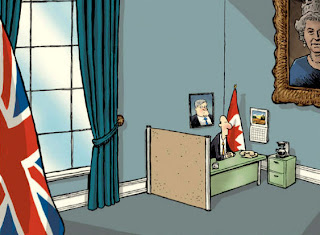 I think this cartoon by the Star's Theo Moudakis neatly sums up what Stephen Harper's Con regime is doing to our image abroad.

For the Cons can try to downplay the embassy move, call it no big deal, just a way to save money. But as I explained the other night, it's actually a huge deal. For the Cons in Britain.

The move by Eurosceptic Mr Hague is seen as a counter to the EU’s fast-expanding European External Action Service, which is setting up offices in the US and other major countries. It is seen by some UK diplomats as a direct threat to Britain’s standing as a major world power.

The ghastly old blimps in the Cameron Conservative Party who are trying to stick it to the Europeans for being too left, too social democratic, too liberal, or just too woggy.

‘There is a saying in the British diplomatic corps that “the French want to do us over, the Germans want to lord it over us and the Italians are all over the place”.

And are counting on their faithful subjects stooges in Canada, to join them in this absurd crusade, and sacrifice our own interests, to help make Britain great again.

Which makes what Great Banana Republic Leader had to say in the Commons today absolutely hilarious.

Prime Minister Stephen Harper dismissed criticism Tuesday over his decision to bypass the United Nations General Assembly during a trip to New York this week, arguing that Canadians know he has provided a strong and “independent” approach to foreign policy.

Especially since while he's in New York. snubbing the U.N., picking up that religious bling, and no doubt stuffing his face with Krispy Kreme donuts, or trying to set-up a menage-a-trois with the Koch brothers.

He'll also be receiving his latest instructions from Benjamin Netanyahu... 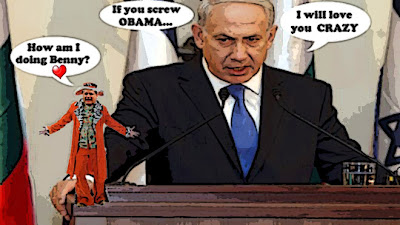 On how to undermine Obama, help Mitt Romney win the election, bomb Iran, and start the Third World War or the Christian Armageddon.

Oh boy. How low have we fallen?

Allan Gregg, the veteran pollster and commentator, caused a bit of a stir recently when, in a speech at Carleton University, he accused the Harper government of making an Orwellian assault on democracy and reason.

Given his drawing of Orwellian parallels, Mr. Gregg will surely be amused that Mr. Harper is receiving an award this week for being a champion of freedom and democracy.

And the good news? How low has Great Sellout Leader fallen?

As Parliament began its fall sitting last week, Prime Minister Stephen Harper's disapproval rating hit 50%, a new poll provided exclusively to Sun News Network shows. It's the first time pollster Abacus Data of Ottawa has found the prime minister to be so unpopular with so many Canadians.

"When your unfavourable rating hits 50%, that says they don't just dislike your policies, they dislike you," Abacus CEO David Coletto said.

You see, it may appear that he is getting away with it. But he really isn't. It's the slow death of a thousand wounds. By the time he arrives at the next election he'll be crawling on his belly, squealing like a pig and/or singing God Save Me.

And the best part?

I thought we would have to spend the next three years degrading him. Before thrashing him at the polls, packing him into a crate, and shipping him back to Alberta.

But who knew we would be so lucky eh?

To have him degrade himself.... 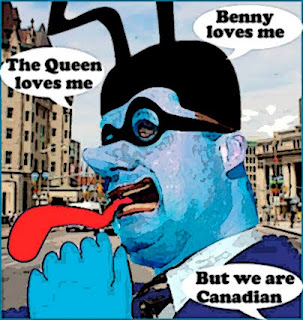 But we are Canadian and we don't love you Stephen except the extreme right wing radicals...

What is funny about this post is it is not funny it is reality and down right scary.

Simon keep it up:]

Wow, Simon! Ever notice how the "righties" always accuse us of being so reactive and how upset they get when they're told that if they want to be fascist corporate flunkies (see "tea party" in 'murka) they oughta move south with their inbred brethren, they get allll kinds of twisted and paranoid and start their threatening, hate-mongering talking points (ever notice how all these asses sound the same as the one braying right next to them?) when there hasn't been any noticeable attempts on the life of Marois or Obama from the left? Do you think there might be a disconnect between the "tea party" mentality (see limbaugh and o'lie ly) and those of that are actually responsible inhabitants of this planet? I Think So! Oh, well. I'm seeing that happen more and more in my generation as we age and don't feel relevant or important enough anymore. It's something that we can feel any kind of passion about again. It makes them think that when they dress up in their little british or colonial costumes (depending on which part of 'murka you think you're living in) that they are so fearsome that the rest of the world isn't laughing their asses off at them. Poor, misguided old neo-cons. If they weren't so fucking idiotically hilarious, one might actually feel pity for them . . . or not! ;-)

I am so worried that the average Canadian voter (becoming an extinct species, I know) just has it too good to ever take what Harpo is doing seriously..
Should I give Canadian voters more credit? After all, they are the ones who put him in place..
What is needed next time is a push like never before to get people to vote..starting to think that mandatory voting is the answer...

Harper is selling the tar sands out to Communist China. This has outraged, absolutely millions of Canadians.

Most other country's, can't stand Harper. They hate his bullying, his dictating and his hissy fits, when he doesn't get his own way. They call Harper, a petty, gasbag, arrogant, stubborn, impossible to work with, and co-operates with no-one. Harper was banned from the pacific Trade Group. The U.N. Security Council, refused Harper a seat, which upset him. At every meetings of Nations, Harper is the trouble maker every time.

Harper sucking up to Britain, means he wants something. He usually dictates to other country's. Germany even told Harper to go to hell, more than once. It is not in Harper's character, to do anything decent. Jolly old England, had better watch out.

There is a web site put up by young people called, shitharperdid There you get the idea, what the young people think of Harper.

People voted him a majority or close to it, he must have cheated a tad also, but what they hell, we are stuck with him. The best citizens can do next election is turn out in droves & vote the idiot out of office along with the rest of the slimers. We need to turn out in such mass that even if he screws with the election, it won't matter because of the over whelming vote against him & his ilk.

Doing business with China, giving them access to this country, destroying our enviornment so China can benefit? The guy should go live in china & run for politics there. This is Canada & stevie slime has done nothing for Canada only China. He needs to go. We are not a British colony nor a Chinese colony. We are Canadian!

You aren't Canadian, heck, if you are a leftwinger you are barely even human....barely.

Mogs and yet he still gets elected. Hope your new leader doesn't drop dead as quick as your last one. Still waiting for you to toss those who disagree with you out of the country. Please tell us all how you plan to do this.