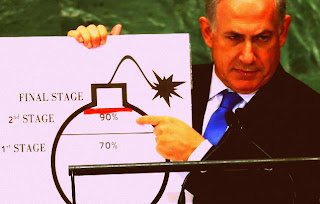 I didn't think it was possible for anything to be as scary and as ridiculous as the sight of Benjamin Netanyahu at the U.N. today.

Looking like a maniac, warning that the whole world was in danger unless Iran's nuclear program was stopped.

“At stake is the future of the world,” Netanyahu said. “Nothing could imperil our future more than an Iran armed with nuclear weapons.”

While drawing a red line on a Road Runner bomb.

But I was wrong eh?

There was something almost as scary, and even more ridiculous to stare at in disbelief today.

The sight of Stephen Harper receiving an award for promoting peace and human rights from...wait for it... Henry Kissinger.

Prime Minister Stephen Harper called on the international community Thursday to do more to “step up pressure and isolate” Iran, which he labelled a regime “where evil dominates.”

He targeted Iran as a country that constitutes “unambiguously a clear and present danger” to the world both for its pursuit of nuclear weapons, its support of terrorism and its threat to the existence of Israel.

Gawd. You think he might have changed a few words. Who does he think he is Margaret Wente?

He's turning us into the pathetic puppets of the Netanyahu settler regime, he's snubbing the U.N., he's making us look like the stooges of the British, he's selling us out to the Chinese and other foreign interests.

And he's a Statesman of the Year?

Being honoured by a war criminal ? 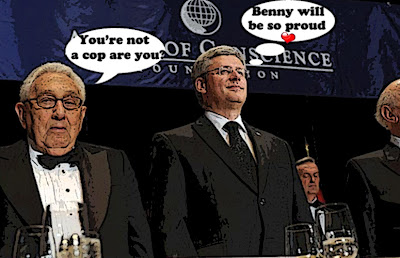 OMG. How low have we fallen.

And the scariest part? Judging from the look on his face, and the way he is puffing out his chest like a pigeon, Great Ridiculous Leader clearly thinks he's getting a REAL award. And that he DESERVES IT !!!!!

Muahahahahaha. What a mad world. What a pathetic nerd.

Benny and the Road Runner bomb.

The bomb cartoon! And this man wants to be taken seriously?

Can't wait for Stewart and Colbert to mock this.

I thought you photoshopped that picture into Netanyahu's hands!

And yeah, harper really thinks it's an honour to receive a humanitarian award from Kissinger.

They live in a world all their own. But it's populated by millions of similarly afflicted lunatics, so they think they're all sane.

But they're just a minority of the population. Most people aren't as bat-shit crazy as they are.

Canada is, Harper's Fourth Reich. Good thing Harper remembered, not to give his Nazi salute, at the award. There are several photo-ops, of Harper doing his Nazi salute. Harper was Policy Chief, for his Northern Foundation Party, from 1989. So I guess it fits.

Now the Statesmen of the Year Award, is dirtied and no longer an honor.

This is the same thing, of Gordon Campbell being awarded the, Order of BC. Campbell thieved and sold everything of value in BC. Especially the BCR. Campbell's first election lie, the BCR wasn't for sale. Campbell's second election lie, the HST wasn't on his radar. Campbell's political record, is the dirtiest, most corrupt and foul, in the history of Canada. The OBC award is dirty now too. It no longer means anything to us anymore.

Campbell was given many awards. It is said, Campbell nagged, pressured and demanded the awards. They eventually would give Campbell the awards, just to shut him the hell up.

It's hard to describe the contempt I feel for the clown Prime Minister. Every week he embarrasses Canada more. Yesterday he received some tin cup trophy from a third rate right wing loudmouth organization for war mongering. Hooray, way to make Canada proud! Netanyahu's pet poodle gets a biscuit. Netanyahu - the guy who goes to the UN to give war mongering speeches using 'Spy vs Spy' cartoon drawings for props.

I feel contempt for the NDP and left. Useful for idiots for the Islamics, till they turn on you.......

B.N. & his "bomb" cartoon looked ridiculous. He isn't the brightest Israeli politician to date & I for one do not take him seriously. He actually reminds me of Stevie slime. B.N. would like us to believe the world is in danger from Iran, well so did Bush with Iraq & look where that got us. A lot of money wasted & a lot of dead people. B.N. needs to find something else to do with his time.

Harper's remarks regarding Iran being "evil". Well I think he is evil. Does that mean I should nuke him? Not so much. If he wants to find evil perhaps he should have a look at North Korea, China, oh, I forgot China is his new best buddy. China, where they had riots in a factory where Apple parts were being made. People living in "dorms" with guards, working excessive o/t, no rights. China is the evil country & he just keeps giving more & more of our reasoures to them. If you want evil try some of those central american countries stevie slime is so keen to have free trade agreements with.

It is well understood the president of Iran isn't too happy about Israel. He & his maybe crazy but they are not stupid. To nuke Israel will result in retaliation of the same sort.

Now if someone thinks I'm anti Israel, don't even go there. I was raised to believe the state of Israel was necessary & all must be done to defend it. At this time Israel does not need to bomb or invade Iran nor do any other countries. This business of economic sanctions doesn't hurt the president of Iran, only the people who can't access good they reaquire to maintain their health & welfare.

Harper is no world leader. he is a jerk who has been busy trying to rob Canadians of their democratic rights and giving Communist China more & more access to Canada.

hi Jymn...It's hard to believe isn't it? Turning an argument for war into a cartoon. The good news is a lot of Israelis are as confused and alarmed as the rest of us, it's hurting not helping his case, and yes the comedians will have a field day...

hi thwap...as much as I distrust Netanyahu I never could have thought up and photoshopped a graphic as crazy as that one. It would have hurt my credibility eh? ;) And yes wasn't that special? Harper getting that tinpot award from Kissinger. The only one missing was Henry's good friend Pinochet. Because if Strangelove can hand out a human right's award so could he. AS for the sanity of the world these days, I'm going to have to save that one for a VERY long post...

hi anonymous...as I've said before I don't consider Harper a Nazi, and I don't encourage others to call him one either. He's just a ratty right-wing ideologue, with a disturbing authoritarian streak, who is making a mockery out of our democracy, and is taking this country to a place it does not want to go. And for all those reasons, and about a thousand others, must be decisively defeated in the next election...

hi Dave...I know how you feel. Not only is this award a farce, it makes you wonder about Harper's grip on reality. Does he really think it's more important to address a third-rate organization than the United Nations? He's living in his own world, and it's a really weird one...

hi anonymous...I don't know why so many right-wingers are so afraid of everything. I despise ALL religious extremists, but I'm not afraid of them. And if you want to defeat them you have to be smart because crude caricatures and simple slogans are just not enough...

hi e.a.f...I agree with every thing you say. And so do most reasonable analysts including many in Israel. Few things would please me more than to see the brutish Mullah regime toppled, but I would rather see it implode under the pressure of its own people. For bombing Iran would only play into the hands of the current regime, just as the country prepares for a crucial election next year.
Also, even if the Iranians do get a bomb, getting a launchable one is another major step. And much easier to detect and destroy. So there is no hurry, and regime change by sanctions and the wrath of its own people should be the priority....

Well you aren't afraid of them because they aren't trying to kill you, yet. The left empowers these people by giving in to their demands. If the Muslims are offended by anything, trust the left to come groveling on their knees in forgiveness. Don't fool yourself, these people see the left as weak and despises them.

So lemme get this straight. Sure, Netanyahu's show-and-tell bomb-graphic was perhaps a little childish. But by the same token, we need not be the slightest bit concerned about Iran's nuclear program?

Do I have that right?