Jason Kenney and the Monstrous Cons 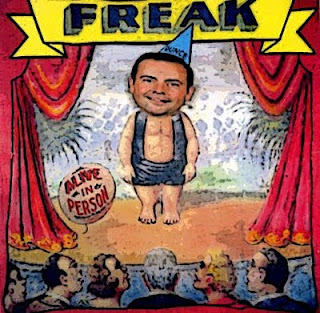 I made this little Photoshop  graphic a few years ago, but I see I was completely right to call Jason Kenney a freak.

For only a freak would run a petition on his website inviting people to thank him for being Jason Kenney.

Canadians who want to sign a petition showing their support for Immigration Minister Jason Kenney’s decision to reduce medical benefits for refugees can do so online — on Jason Kenney’s own website.

And only a Con could be so EVIL.

“We don’t think that smuggled migrants and bogus asylum claimants should be getting better health care benefits than Canadian seniors and taxpayers,” the petition says.

For let's face it eh? Kenney's plan to deny health benefits to refugees is a monstrous act of inhumanity, that offends the values of this country.

But the way he is trying to appeal to the worst instincts of some Canadians, by making it sound like refugees are cheating them out of something, is an absolute abomination. A brutish act of xenophobia that should disgust every decent person.

But of course it won't disgust Stephen Harper and his Con regime. Because it's their modus operandi.

It starts by denigrating the program and the program's beneficiaries, and telling Canadians that they have been played for fools by the beneficiaries. Once that message has been drilled home, and the government judges that the moment is right and Canadians' attitudes changed, it proceeds to get rid of the program.

First they smear and debase the precious things of this country, and then they destroy them. Even though the money involved is so little, and the number of refugees so small.

From Kenney's zeal to reform Canada's refugee program, no one would guess that refugee-acceptance rates are at their lowest in the history of the Immigration and Refugee Board, at 38 per cent in 2010 and 2011...In recent years, the centre has found, the acceptance rate has been stable at between 40 and 45 per cent of the roughly 25,000 claims made every year. At that rate, a total of 11,250 people are accepted every year, including 2011.

For a country so big, now called Harperland, and growing smaller and meaner by the day.

Oh boy. All I can say is thank goodness for these doctors.

And my kind of  Canadians.

Michel Foucault wrote that ‘the the primary obligation of the physician is political. The struggle against disease begins with a war against bad policy. Man will be totally cured only if he is first liberated.” For those seeking freedom and security, we can only strive for Canada to deliver on that hope.

Who are standing up for our precious values. The kind of values that make us decent and human. And fighting the loathsome values of  Stephen Harper's foul regime, that would turn Canadians into beasts and bullies, and our society into a JUNGLE.

Deliver us from the evil freak Jason Kenney... 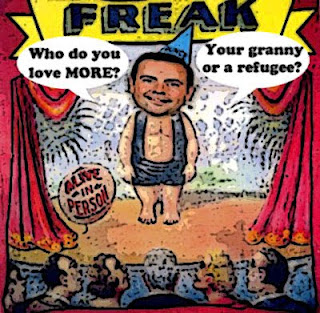 Deliver us from those monstrous Cons...

It's amazing that this same jerkass was trying to typecast the CONs as the party of "new Canadian values" while belittling the Liberals as "flippant annex secularists" just over a year ago.

It's much better to allow genuine refugees to suffer from medical problems indefinitely than it is to let some bogus applicant get their teeth looked at?

All to save a tenth of the amount of money that harper wastes on one international conference?

Whats vulgar is that it appears Jason may be one of a handful of Gay and Lesbians in the Harper cabinet, yet Gay bashing is part of their SOP. I wonder why more pressure is not put upon said members to come out and be real.

hi Analyst...yes it is bizarre and hypocritical isn't it? I fear the erratic Con agenda these days is determined by which of the voices in Harper's head speaks to him first in the morning. And to make matters worse all of them share one thing in common. Winning is everything and cruelty is just a concept...

hi thwap...this disgusting Con plan is not just evil, it makes no economic sense. If you don't treat people in a clinic or doctor's office, you can end up treating them in an emergency department and that's far more expensive.
As you know, I kid around a lot, but on this issue I'm deadly serious, and Kenney's plan makes me see RED. Luckily I'm friends with quite a few young and idealistic doctors, and they give me hope for the future...

hi Steve...please don't raise the very real possibility that Jason Kenney is a secret member of the gay fraternity. It's just too embarrassing eh? Jesus Christ almighty where's a doorman when we need one? Besides if Kenney is gay he'll never admit it, because he's a so-called Latin Catholic, and Pope Benny doesn't allow that. And let's not forget that Jason has also vowed to remain chaste until he's "married." And since he's now in his mid-forties I fear for his sanity. For let's not forget that he was the one who claimed during the gay marriage debate that gays and lesbians were free to marry, as long as they married someone of the opposite sex. After that one I knew that his chastity had spread too far, and there was no way to save him... ;)

Jason's decision to prevent some refugees from obtaining medical care is stupid & expensive. When these people show up at emergency rooms, the cost will be much more. Now that Bev Oda is gone, they can use the savings from her expense account to pay for the medical services.

No civilized country would be doing that. Dear old Jason wants to make it sound like Canadian citizens aren't getting medical care because refugee applicants are getting medical care. He really is an evil man. It will be so nice to see the end of him. I don't know what the little man did before he got into politics but I hope he goes back there.

Yes, I would have to say his attitude is like those of a little man, a little mean man,not a generous Canadian. the guy gets driven around in a limo & he doesn't want refugees to get medical care. Send the guy to live in a refugee camp for a few months. See what he is singing then.