Chucky Harper and the Singing Beaver 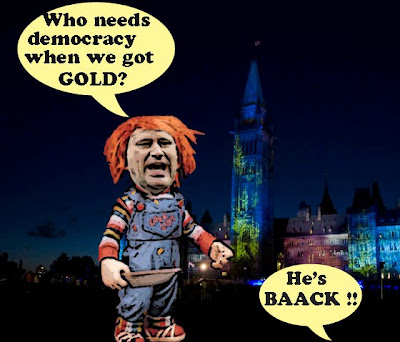 Well I see Great Chucky Leader is back in Ottawa, hoping that Canadians are feeling so good after the Olympics, they'll forget that he shutdown Parliament to avoid questions about torture.

Because that and living in the best country in the world don't go together eh?

And that old medal hooker must think we're IDIOTS.

Having brought along his official photographer, Mr. Harper managed to capture for posterity his reaction to the heartbreaking U.S. equalizer, the moment of victory in overtime and even his trip to the locker room to congratulate the champions.

Because if Vancouver was a great party it had everything to do with the athletes and the people, and NOTHING to do with him.

And how can we be the best country in the world as long as Great Ugly Leader is Prime Minister?

Besides I just don't think it's going to work because Stephen Harper is now damaged goods.

Pollster Frank Graves says he thinks prorogation planted the seed for a bigger problem for Mr. Harper: His personal approval ratings plummeted, and now most voters outside his base of Tory supporters disapprove of his performance.

"It lit the fuse that consolidated a whole series of anxieties and concerns that a certain portion of the electorate were having about Mr. Harper's management style."

So now everything we throw at him will hurt more than it EVER did. Because now even MORE people don't trust him.

Question his motives, ask him about the theocons in the PMO, ask him whether he's turned on more by torture or Jesus. Ask him why he wants an election before the auditor general reports on his corrupt Porky Patronage Plan. Demand a public inquiry into the brutish Con assault on Rights and Democracy.

And the Chucky will look like a monster...or a DUMMY.

And oh yeah...Stephen Harper posing as a patriot? Don't make me laugh.

Just give me the strength to help defeat him. Because prorogation still matters. Real Canadians care about democracy.

And of course, because I want my country to be the best country in the world eh?

And so does the singing beaver...

I'm sorry to be the bearer of bad news, Simon, but knowledge is power. We're going to have to do something.

According to latest Ipsos Reid poll, Harper's numbers just shot up to 37%; well within majority grasp. Most like shiny things and all that glitters is gold. thus, they swallow the kool-aid the Harpercon media feeds them.

How do we undo this damage?

I'm pretty depressed and scared. I think there's gonna be a last minute poison pill in the budget come March 4.

hi ck...yeah I saw that poll but since an EKOS poll conducted over the same period with more than twice the sample size showed quite different results I wouldn't panic yet. The fact is Harper has been out of the news, taking no questions, and the less Canadians see and hear of him the more they like him.
But now he can't run anymore and if the opposition plays its cards right they can knock his numbers down again.
Of course, in the unlikely event that he does manage to fool Canadians,then I wouldn't care either.
Because in that case Canada wouldn't be the best country in the world eh?
Just a nation full of shallow idiots and not worth saving...