The Teabaggers: When Ignorance is Dangerous 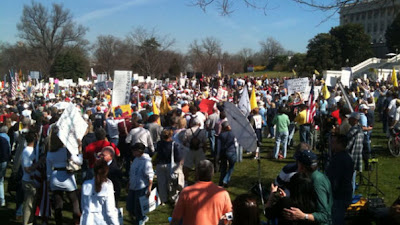 Well I see the teabaggers have invaded Washington, and are wandering around spitting at members of Congress and calling them faggots and niggers.

And what can I say eh? When I'm a Canadian fighting to stop the Con teabaggers from killing medicare in this country.

And this video just about says it all...

But since we live next to Amerika I feel like I HAVE to say something eh?

We need to get our army back from Assghanistan and tell them to guard our border.

Because these people are crazy and DANGEROUS...
Posted by Simon at 2:34 AM

Labels: Teabaggers, The Fall of the Amerikan Empire, U.S. Healthnuts

Most repeated phrase: I don't know.

I didn't count the number of times but it's a great number.
What's really alarming is how so many people with no real knowledge can converge on Washington and demonstrate about a topic they haven't really studied.

So many of those people have "heard about" this and that but don't know the first thing about specifics.

They haven't done their homework and they manifest their ignorance for all and sundry to see on national TV (except Fox, of course). Imagine if you had to speak on a subject to your school class and had not prepared for it. That's what these people have done--no preparation--and the world is watching.

They've got to be scratching their heads in the advanced countries of the world where universal health care is the norm.

These displays of ignorance do nothing to enhance the American image abroad. No wonder most Americans don't want to travel abroad; they're looked down on.

When the bill goes through, there will be such a hue and cry in the conservatives' corner and the knives will come out against Obama all the way through to the next election.

I explored the success of the Tea-baggers today in my post.

In today's anti-health care protests, they weren't that many. There are protests, like the anti-war which had more people but less media coverage.

CAPP RAllies across Canada had even more than the tea-baggers in today's rallies, yet they get praised,near hero worship by so--called msm.

CAPP Rallies were belittled, dismissed as unsuccessful, lambasted and nitpicked by our so-called MSM.

Another thing, a tea-bagger is on the gallery of the house floor being rambunctious with the inflammatory language, yet the GOP are leading the praise toward them.

In yesterday's anti-war protests in D.C. 8 were arrested from lying on a sidewalk.

hi Torontonian...yes I must admit that reporter did a masterful job of questioning those teabaggers.
Because more ignorant than that and they have to water you eh?
To me the message is obvious, the Amerikan Empire is teetering on the edge of collapse, and The Abyss is not far off...

hi CK...you're right about the number of teabaggers and the coverage they received. But the polarization in the U.S. is now so extreme anything could happen.
The fascist klowns have poisoned the well and are making the country ungovernable.
What we have to do here is make the connection between the teabaggers and the Cons, and send Harper and his klowns back to Amerika where they really belong...