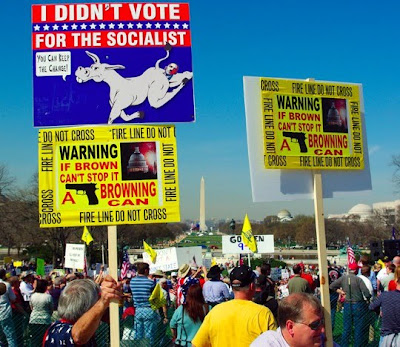 I knew the teabaggers were crazy and dangerous, I just didn't realize how dangerous.

Hoyer told a news conference that "a significant number, meaning over 10," had reported either threats, vandalism or other incidents.

But what do you expect when one out of four Republicans think Obama is the antichrist.

A new Harris poll found that 57 percent of Republicans believe President Obama is a Muslim — 57 percent. 45 percent believe he was not born in the United States. 38 percent feel he’s, quote, “doing many of the things that Hitler did.” And 24 percent believe he may be the Antichrist.

And some think that's funny.

Meanwhile at the grave of Senator Edward Kennedy. 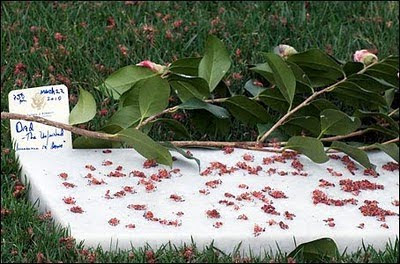 And in Canada our RepubliCons, vote to deny poor women safe abortions, to satisfy their rabid base.

Celebrate by claiming it's raining frogs.

And believe that the wingnut bigot Ann Coulter has something to say to Canadians.

Oh boy, some unfinished business. So much still to be done.

If Teddy wasn't dead they'd be trying to kill him...

Anyone who thinks that this madness isn't spilling across the border.

Is dreaming in technicolour...
Posted by Simon at 7:20 PM

hi Atreides...I know you know more about that high-level conspiracy than I do, but I must say from where I stand looking across the border into the U.S. it looks like MADNESS.
To think that the richest country in the world can produce legions of illiterates and fanatics is a frightening indictment of their jungle capitalist system. Especially since so many of them are poor people railing against healthcare for other poor people, or against big government that feeds their families with food stamps. I have a friend, a medical student who recently visited a tent city set up to treat poor people, and he said he felt like he was in a third-world country.All I can say is God help us, and aren't you lucky you have an ocean separating you from them ? :)