Why Are the Baby Boomers So Gloomy? 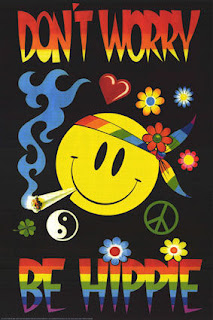 I love a lot of things about the baby boomer generation. Their music, the peace and love stuff, and all the things they did to advance the rights of women, blacks, and gay people.

And, of course, I love my parents.

So I was kinda disgusted to see that some guy has set-up a baby boomer death counter.

And was delighted to see my friend JJ at Unrepentant Old Hippy really give it to him.

If only we hadn't been caught in the crossfire.

Oh no: Generation Whine strikes again (and by Gen-Whine I don't mean everyone under 40, just the ones who hate boomers so much). What's the matter, the internet, iPods and HDTV weren't enough? We need to give you whimpering, puling little creeps even more?

Who are these Generation Whiners? I don't recognize them. WAAAAAAAAAH !!!!!

As I tell my father, who has been known to voice similar sentiments, it's soooooooo unfair. We have so much we could whine about. Lousy jobs, no benefits, whopping student loans to pay off, no hope of owning a house like our parents did. Not even a comfy pension to look forward to....just a no-oil future on a burning planet teetering on the edge of war.

But we don't blame the older generation. Polls show that young people are the ones who least consider John McCain's age to be a problem.

We don't really whine that much either. We leave that to the Boomers.

Boomers are tired, overworked, strapped, bummed out and don't expect to get a break.

More than young people or seniors, Baby Boomers (aged 44 to 62 now) are gloomy about their lives and the prospects for improvement, a new survey finds.

They've got EVERYTHING. But still they complain. So who is whining now?

But I forgive them. Not just because I love them. And I know that thanks to Viagra the best is yet to come. But also because we can AFFORD to be generous.

Move that psychedelic bus out of the way Boomers....here come da Millenials!!!

Who are not only pretty cool..... there are a LOT of them.

There are 83 million millennials, people born after 1980 who came of age around the millennium. That is about 5 million more than the baby boomers.

So the Boomers better be nice to us or else....

Because the last thing we need in this troubled world is a generational war.

You know my mother used to play an old Joe Cocker song to make me eat my baby mush. When I really wanted steak like my brother had. WAAAAAAH !!!!!

And when I was a teenager my father used to pretend he WAS Joe Cocker....in public. Which was EXCRUCIATINGLY painful.

But I still love those hippie dippy boomers.

And I still love this song...

Yup. I Simon do declare. With a little help from our friends....of ALL ages and generations.

With all their weaknesses and strengths.

We can bring back some of that peace and love.

I am not sure how I feel about this article...kind of gloomy in a way. I like stuff about baby boomers..but is this??? carol stanley author "ForKids 59.99 and Over....www.carolsatnley1.com

i love wot u wrote again,its so true that everyone can produce power o create a world wit no discriminaion,war...if we be together.long time no see,hope u and sebastian will lead a happy life 4ever:)

Hi Carol!! Oh no. That's the last thing I intended. I have to admit that I didn't put much thought into it. I'm like that......especially when it rains :( I just thought I'd have a little fun with the generational thing. I noticed it during the Obama/Clinton contest. And was fascinated by its potential for change...as well as troubled by the fear that if misunderstood could end up pitting one generation against another.
But I'm fundamentally optimistic.I don't think that's going to happen. The Boomers may be a bit grumpy these days, but I know they'll rise to the occasion. And that they will tip the balance that will lead us to a whole new and better world.
On the other hand I could be wrong. And if I am I'm doomed !!! They'll all hate me for making them even MORE grumpy. And there are still a helluva lot of them...LUCKILY.. :)

Hi Richard !!! Nice to hear from you again. I thought you had been conscripted to greet gay visitors arriving in Beijing. I know you would hate that .. :)
Seriously though it must be very exciting. I hope the games are a huge success and that they help bring countries together. We need to do that if we want to build a better world...or just save the one we have. I hope everything is going well and that you are having a really HOT summer.

Ask any comic or street entertainer and they will tell you that hippies are generally just angry people.

Boomers believe they are entitled, whereas older and younger generations tend to understand life in broader terms than just the self. The "Me Generation" does have some redeeming qualities which I mention on my site, however they also have a group which border on having a collective narcissistic personality disorder. These folks must rail against those who remind them that their self-centred lives are coming to a close. For those of us who have faith in the resurrection, we can face the coming night with the hope of a new morning. Those who don't see death as a coming oblivion. They must suck up life now and this spiritual poverty expresses itself in support for abortion. The self-fulfillment of the current generation therefore trumps the lives of babies. If having such beliefs makes me a nutjob that's fine with me.

I don't consider you and your type of young people to be Generation Whine -- it's the young conservatives that are always whining about boomers. I probably shouldn't use the term "generation" because it implies an age group, where what I really mean is an age group with a certain attitude.

There are lots of cool young people like yourself trying to make positive changes in the world instead of just whining about baby boomers. Those people are not part of Generation Whine.

It's like you said, we should all be trying to get along.

As long as everyone stays off my lawn;)

Hi James...I'm not calling you any names. I just thought that your counter was meanspirited. You seem to be celebrating the death of a generation and I don't think that's right. You shouldn't generalize. I know quite a few boomers and they are all good people ...including my parents...and they taught me a lot.
And I also know quite a few members of my generation who are absolute selfish jackasses. And sometimes I think I'm suffering from narcissistic personality disorder. In fact I'm sure of it !!!
As for the abortion issue I respect your position, but personally I believe it's a question for women to decide. And I trust in their good judgement.
Thanks for your comment.

Hi JJ!!!! Yes I am a brat sometimes. Or is it a gnat? :)
I just couldn't resist. As you say I think what you're talking about is an attitude more than a generation. Although I do love the expression Gen-Whine!!! And I do know some young whiners...ahem.
I love this kind of stuff though and I think the Boomers and the younger generations are natural allies. And when they join forces some sparks may fly but they'll all end up as beautiful stars...
Except for me. I wanna be a comet!!!! WAAAAAAAH !!!!! :)