The Liberals and the Dion Disaster 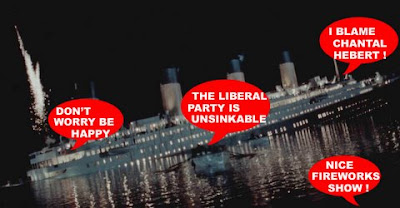 How much longer I wonder will the Liberals be able to deny reality? Until the boilers burst? Or until the leetle feesh are nibbling on their ears?

How much longer will it take before they understand that Capitaine Dion has hit rock bottom in Quebec? And what that really means.

How much longer before they acknowledge that his wimpy performance and failure to stand up to the nerd Harper...or articulate any kind of vision.... is stinking out the joint in the rest of Canada?

And that unless some miracle happens the rest of us are about to follow him into the nightmare depths of a Harper majority.

How much longer I wonder can the Liberals blame it ALL on Chantal Hebert?

When in fact it's Dion's incredibly inept performance, and their ignorance and denial, that has led us all to this unhappy place.

Look I don't want to be TOO negative. Some of my best friends are Liberals. And apart from the fact that I have to walk uphill to the bar, and the band just fell overboard, I'm quite fond of the Liberal Party.

And of the wonky but decent professor.

Even though he told an interviewer recently he'd like to remembered as a "father" of the nation.

Instead of the most bumbling political leader in modern Canadian history... 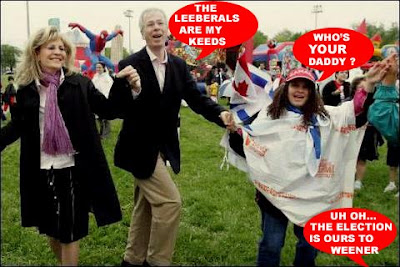 I feel sorry for Dion. But I also feel that the danger of a Harper majority government is now so great it's time to take the dancing slippers off. And put Canada first.

And that the only options we have left to avoid disaster are these:

(1) Convince Stephane Dion to put Canada before himself and his party and resign. Tell people he's going to write a book about the limitations of politics, and drop him off at the Sorbonne. Have Ignatieff lead the party into an election...with a promise of a leadership review six months later win or lose. Hey ... I'm no Ignatieff supporter. But even Kyoto the dog would be better.

(2) Use special effects and plastic surgery if necessary to makeover Dion as a quiet thoughtful humble man of few words.(Especially in English.) But one who has a simple but brilliant vision that will make up for letting Harper claim all the credit for the Quebec nation idea.The one that is now paving his way to a majority. Something on the scale of abolishing the monarchy for example. And then hope that "The Vision" and "The Team" can carry the day even if the Leader can't.

(3) Form an emergency coalition with other opposition parties in the name of saving Canada. Which is desperate but will have to do until the progressive side finally understands that unless it unites into ONE party like the Conservatives have, it will ALWAYS be at a disadvantage. And that until that happy day arrives....or until we have proportional representation... we need more tiny partycules like the Greens like we need a hole in the head.

Is any of the above likely to happen? Probably not. But at least the truth will set us free.

And prepare us for what lies ahead.

Put on your life jackets folks.

Simon, your pessimism is depressing. No I don't blame all of Dion's troubles on Chantal Hebert. I blame his own unwillingness to be proactive when it comes to shoring up his weak points. But he's a smart man too and a better fighter than I. He'll figure out what he's doing wrong and try to correct that within the best of his abilities, which are considerable. Don't forget, he likes being underestimated and there's no going any lower than where he is now. I hope I'm not wrong.

If you only focus on the past, you ignore the potential for improving in the future. Most of these commentaries which completely declare Dion dead politically remind me of the same commentary in 2005 about Stephen Harper, who was also written off similarly at that time. Now he's unbeatable.

I say the current narrative can change dramatically. You've given up on Dion. I haven't yet. I just can't objectively look at Dion's past successes and say well it's all over now, let's stop listening.

I say let's take a breath, chill as Bill Clinton would say, and give Dion a chance. That means at least one election campaign. Ignatieff and dare I say it Rae are not the answers.

Hi Matt!!You weren't the only one who told me I was too pessimistic. So I'll just tell you what I told my other friends.I don't want to beat up on Dion. He is a decent and smart guy, and I think if he ever got elected he might make a great PM. But as a politician he's a bust. I think he might be able to win back some credibility in English Canada IF he comes up with a communicable vision that can excite voters instead of just confusing them. But believe me brother, as an English guy raised by French wolves, and who loves Canada just like I love Quebec, I'm afraid that in the Belle Province Stephane is toast.
And it's not just the past either.
If I recall after the convention his polls in Quebec were pretty good. It seemed that French Quebecers were prepared to give him a second chance. But his mishandling of the nation stuff gave Harper a weapon... the illusion of being a reasonable federalist... that is killing the Liberals north of Montreal.
And managed to alienate Quebecers Then he goes on to neuter himself even further by joining Harper on Afghanistan...in the most anti-war province.
So I guess this post is just a measure of my frustration.
But I will try to be less gloomy... and more constructive... because I do want our side to win.
You're obviously a very decent guy like a lot of Liberals I know. So good luck with your fight. And I'll be there too...grumbling away. But still covering your back...