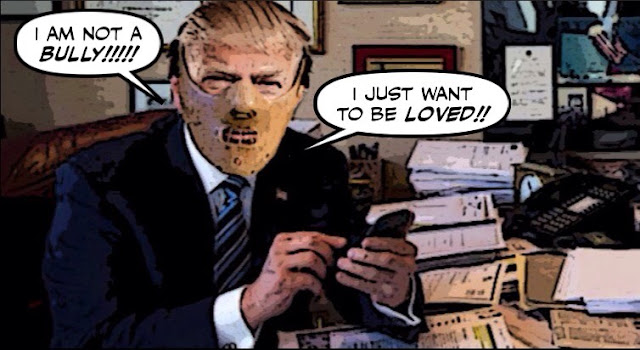 Even by Donald Trump's insanely low standards, his behaviour on Twitter in the last 48 hours couldn't be more deranged and deeply disturbing.

Firing out tweets in every direction as if he was in some fevered frenzy.

Looking and sounding more and more like a maniac. 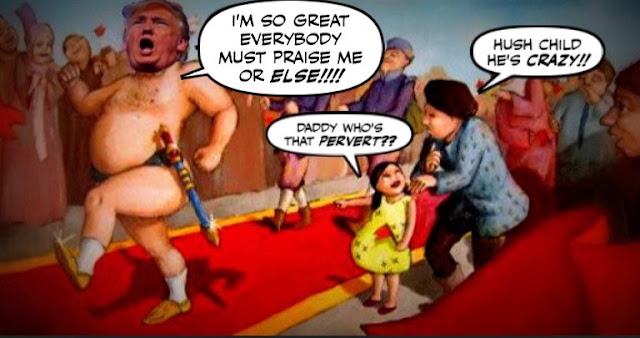 And even less, if that's possible, like a President.

Blasting the father of one of the three UCLA basketball players he claims he saved from facing shoplifting charges in China, for not praising him.

LaVar Ball downplayed his son's shoplifting incident in China, as well as President Donald Trump's involvement in getting LiAngelo Ball and two other UCLA basketball players back to the United States earlier this week.

"Who?" LaVar Ball told ESPN on Friday, when asked about Trump's involvement in the matter. "What was he over there for? Don't tell me nothing. Everybody wants to make it seem like he helped me out."

And then going even further.

Only to be accused of being too small to be president... 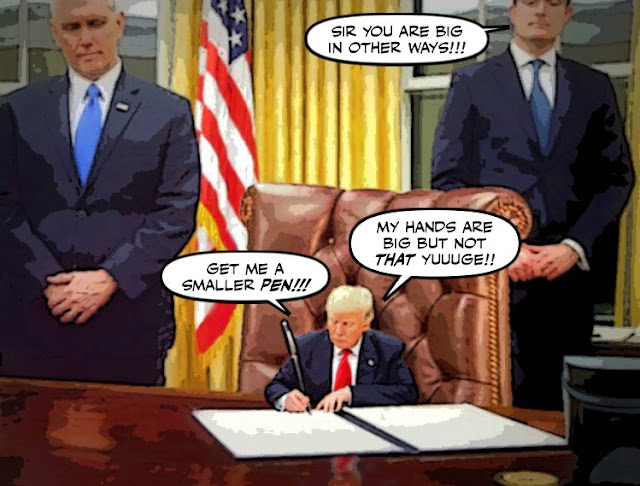 But then of course Trump has so much on his mind these days he is even having trouble recognizing people.

New Zealand's Prime Minister Jacinda Ardern was worried she may have caused a "diplomatic incident" after reportedly claiming that Donald Trump mistook her for Justin Trudeau's wife.

Which must have been embarrassing eh?

But not as embarrassing as having the monstrous religious pervert and homophobe Roy Moore come lurching after him demanding that Trump support him.... 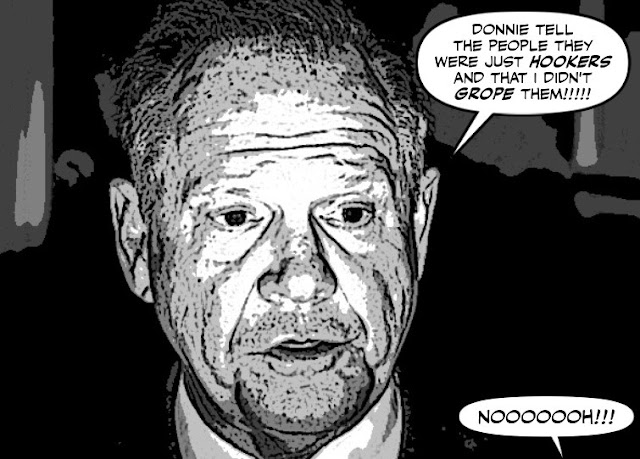 But of course Trump can't do that, because he's also a pervert.

And besides, he has other more pressing things to worry about.

Special Counsel Robert Mueller's team investigating whether President Donald Trump sought to obstruct a federal inquiry into connections between his presidential campaign and Russian operatives has now directed the Justice Department to turn over a broad array of documents, ABC News has learned.

In particular, Mueller's investigators are keen to obtain emails related to the firing of FBI Director James Comey and the earlier decision of Attorney General Jeff Sessions to recuse himself from the entire matter...

Because it's Mueller Time in America. Again... 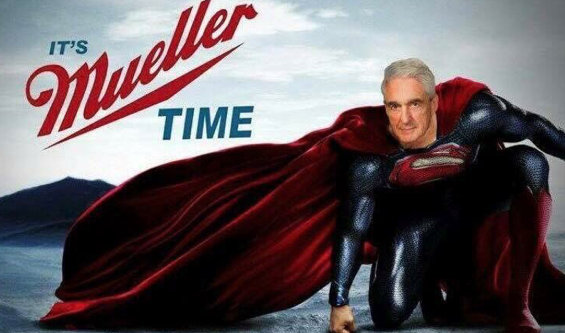 Just in time for the holiday season.

And it seems obvious that Robert Mueller is still determined to nail Trump and his gang for obstruction of justice.

And that's why Trump is acting so crazy.

Like others in his besieged While House, he knows that's the easiest charge to prove, and that it's going to be a long winter.

One Republican operative in frequent contact with the White House described Mueller’s team “working through the staff like Pac-Man.”

“Of course they are worried,” said the Republican, who insisted on anonymity to offer a candid assessment. “Anybody that ever had the words ‘Russia’ come out of their lips or in an email, they’re going to get talked to. These things are thorough and deep. It’s going to be a long winter.”

“When the staff gather in the morning at the White House now, they jokingly say: ‘Good morning. Are you wired?’ ” one person close to the administration said.

The rats on the sinking ship are getting ready to start jumping.

And even Trump must surely see the writing on the wall.

And know how this story is going to end... 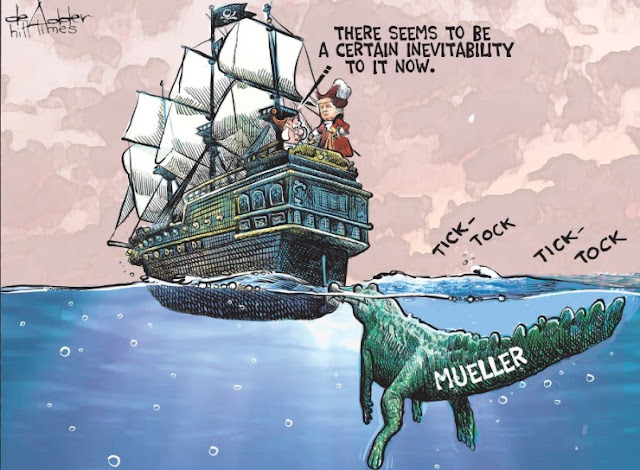 Labels: Donald Trump, Robert Mueller, The Madness of Trump, The Rise and Fall of the Orange Oaf

He will nail them on obstruction and FARA while he goes after the bigger charge, conspiracy. Hopefully the dotard will be forced to quit or flee.

HAHAHAHA! This dotard is such a moran he mistook Jacinda for Sophie?

That reverberating sound you're hearing is the echo of a massive simultaneous "WTF" back and forth from Christchurch all the way across the equator to the Rideau District.

Trump is reverting back to his childhood. He needed love so badly but he never got it,so now he's going senile. Give him another six months and he won't remember his own name.

I was just watching an interview with Dr Bandy Lee on France24. She was lead author for The Dangerous Case of Donald Trump: 27 Psychiatrists and Mental Health Experts Assess a President

She was scary in assessing Trump. Even Pence sounds better.

I don't think the presidency will ever recover from what Trump has done to it. He has debased it so much it will take a truly great man or woman to raise it out of the gutter. The banality of evil has become the vulgarity of evil.

Will it end in a Mueller chomp chomp,or in one great unholy fireball? If Trumps history is any indication it will end in the political equivalent of a bankruptcy where the investors (Americans and others) get screwed and everyone else rides off into the sunset with sufficient assets to embark on a new gig the next day. Not the best scenario but there are worse!
RT

hi anon...yes I agree, obstruction will shake the tree, get the Trumpkins running and squealing in every direction, and hopefully send Trump into house arrest in Mar-A-Lago for the rest of his life, or into exile in the Philippines....

hi anon...yes, and not for just a couple of minutes either. It's interesting, he's always mixing up women, like he did with those two Finnish reporters at the White House.
I guess he's got to grope them to tell them apart. What a pig, when will the FBI serve him with an apple in his mouth?

hi anon...you know that's interesting, because it is clear that so much of his behaviour is his need for people to praise him or tell them they love him. I read a long piece recently on his Scottish mother, and according to that account she was very cold and all but ignored him. So he had to try to get his father Fred to show him some love, but Fred was a pig and he didn't get enough love from him either. And now we're stuck with their fat needy monster...

hi hrkrideau...I saw her once her being interviewed on TV and I thought that everybody should hear what she has to say. It was that lucid and scary. And yes, as much as I despise the homophobic religious fanatic Mike Pence, I think we'd stand a better chance with him of making it to 2019. He's more stable than Trump, and when you command the most powerful nuclear armed military in the world that's definitely a good thing...

Hi anon...I sometimes feel the same way, but then I think of this: If the military removed Trump, and Barack Obama was brought back to power, and he spoke to the nation and the world, how long would it take me to recover my respect for the presidency? And the answer is not long....

hi RT...I don't know how it will end, but I fear it could end with the closest thing to a second civil war. For while Trump's popularity continues to tank, the support of his crazed base remains as strong as ever. He is like a cult leader to them, and they won't believe anything bad about him. So never mind whose side is right, it's more like who will have the most tanks?

hi David...that's interesting, especially the fact that he attacks the media more than anything or anyone else. I guess he recognizes that since he has control of both Houses of Congress, and most state governors are Republicans, the media is the only opposition he has. And that's why he is so determined to muzzle or destroy it. Luckily for progressive Americans, they don't have a shabby shuffling Con media like we have, or they would really be in trouble, and Trump could set himself up as Dictator for Life....

Trump is just an honest Republican. Its a gift.

Duty to Warn: The Movie
https://www.youtube.com/watch?v=PaFJT-LU8lU