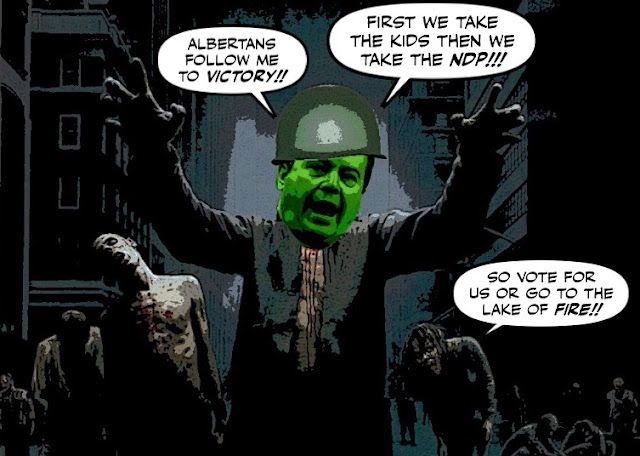 As I'm sure you know, the bloated bigot Jason Kenney is waging war on LGBT children. Again.

Claiming that his opposition to Alberta's Bill 24, that is designed to protect gay kids who wish to join a Gay-Straight Alliance, doesn't mean he wants to out them to their parents.

Who could hurt them, or throw them into the street as so many parents do. Or even kill them.

But like everything that self loathing closet queen says or does, his words mean nothing.

And as Rick Mercer says, Kenney should be picking on somebody his own size.

Bill 24 passed this afternoon, and LGBT kids are now protected.

So now there is only one big question that remains to be determined.

Who will protect Alberta, and Canada, from the monstrous freak Jason Kenney? 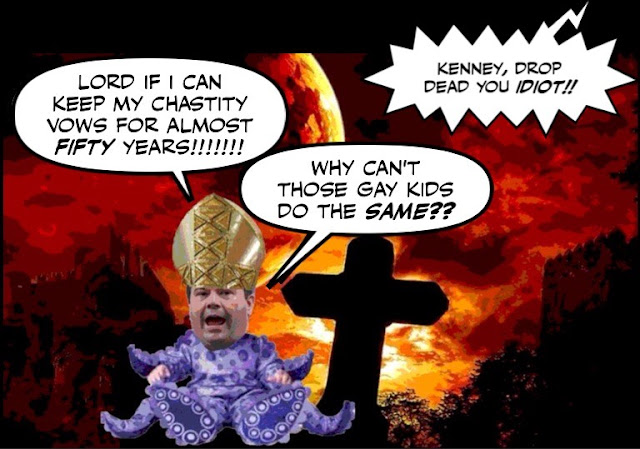 For mark my words, if that cowardly bully is not stopped.

He will rip this country apart...

The 50-Year-Old Virgin completely misses the point of Gay-Straight Alliance organizations, obviously. Not only is it a "safe space" for LGBT kids (who might very well face backlash from their parents), but a supportive place where they can find compassionate and sympathetic peer allies who are not LGBT but who provide them with friendship and camaraderie in a way that adults don't, can't, or outright won't.

Every civil rights struggle counts on members of the majority group to take the risk of rejection from their in-group peers for giving a leg up to those on the "outside." Nowhere is this more evident in Canada than when Pierre Trudeau, a married (or soon-to-be-married) Catholic, declared an end to the government-sanctioned persecution of LGBT people ("the state has no business in the bedrooms of the nation"), and now his son, also a married Catholic, continues his father's legacy by marching at Pride and lending vocal support to feminism as well.

Feminism is inextricably linked to Pride, in fact, as Justin pointed out in his Marie Claire essay where he denounced what's called toxic masculinity (or macho culture) as being harmful to not only girls and women but boys and men too. He's raising his boys to be sensitive and empathetic, and he doesn't want them to grow up in a world where they get demonized for it (which the trolls went ahead and did anyway, rather savagely I might add, in picking on his three-year-old son for dressing as a pink poodle for Halloween). He wants his kids to grow up in a world where there's no rigid parameters of what's for "boys" and what's for "girls," and the inflexible gender roles that tie into homophobia and hatred of women. It's important for the marginalized to have someone of "in-group" status saying this -- particularly someone who has the power and authority to make change not just through advocacy for "hearts and minds" but to make important and sweeping decisions in a legislative or governmental realm.

On a smaller scale, in the school settings, supportive allies are key to the emotional security and survival of "out-group" students just the same -- perhaps even more so because childhood and adolescence are such a crucial time of development where the "self" is formed and important social relationships and a sense of trust are forged as well. Kenney wants to break even that by "outing" the "straight" kids in the GSAs as traitors to their kind. If he is gay (and I strongly suspect he is; psychological studies have even confirmed that the more homophobic one is, the more likely one is to have a repressed same-sex orientation), maybe if he'd had a supportive peer group while growing up in such a conservative environment as Alberta, he wouldn't be such an obnoxious hatemonger today. But, he didn't. Damn straight (pun intended) he shouldn't be permitted to inflict that kind of environment on the next generation.

Why doesn't he go shack up with Vlad, like Saddam Hussein did with the devil on South Park? He can take the rest of his "in-group" with him. Levant, Scheer, Harper, and the religion-obsessed American inquisitors of the Trumpublican Party who undoubtedly have their own skeletons in the closet. What Pride has brought together, let no con put asunder. The state has no business in the safe spaces of the nation.

I'm not as big a fan of Mercer as I once was. He's been acting like a Con recently complaining about how the Liberals are raising his taxes. Boo hoo hoo. But he really nailed that closet queen Kenney so good for him.

A well thought out explanation of why Kenney is on the wrong side of Bill 24. Unfortunately the Cons can spread their message of bigotry and intolerance in 4 words or less. Communication is a real problem when people have the attention span of a gnat. Simon's visuals helps transcend this problem but we need more.
RT

Hi anon...well said, and you cover just about every base. If I am a progressive activist and blogger today it's because I despise bullies more than I hate anything and anybody else. I got into many fights when I was a teenager defending myself and others. When I saw Harper I saw a bully and spent ten years fighting him. When I see Kenney and the Scheer Cons I see more of the same and will never stop fighting them...

HI anon 9:54...yes I agree, I have criticized Mercer for acting like a Con and distorting the Trudeau government's attempt to make taxation fairer. It's a sad at to end a career, but his anti-Kenney rant was well done, and if it's his last rant he could still go out on a high note....

It's painfully obvious that a lot of Kenney's supporters are clueless about the scope and intent of Bill 24. While the passage of the bill is cause for celebration I'm only too aware that there are groups out there who plan to challenge it in court and chisel away at it should Pork Boy become Premier. People like Kenney are a clear reminder that we must stay vigillant and never go down without a fight.