The Great War on Christmas Is With Us Again

Uh oh, don't look now, but it seems that the Great War on Christmas has begun.

And not in the United States where Donald Trump has vowed to save Christmas from the liberals and their happy holidays.

But in Britain, where a group of religious fanatics is threatening to boycott Tesco the large supermarket chain.

For running this seasonal ad.

Because, sadly, just the sight of a Muslim family is apparently enough to make those bigots flap their wings like turkeys.

But then of course they're the same people who are going after Starbucks for allegedly pandering to the "gay agenda."

By among other things allegedly including two same-sex hands on the holiday cup.

This year's Starbucks cups are under controversy - again - for its alleged "gay agenda" and many on Twitter are theorizing that the couple depicted holding hands is a pair of lesbians.

Which I must admit confuses me eh?

For  while I know EXACTLY how I feel about the bigots who are threatening to boycott Tesco...

And my Mum just e-mailed me to say she's sending me a Tesco Christmas pudding in the mail. So there.

What do you say to a religious freak like this one?

Is he seriously suggesting that lesbians could give themselves over to "shameful lust " in a Starbucks?"

Or that gays and Christmas don't go together? What???

Who do they think those elves are, who decorate Christmas trees and dress up fancy shop windows all over Canada?

And still manage to shop, like some of my friends, as if there was no tomorrow.

Oh boy, with people like Jimmy who needs a Great War on Christmas?

And thank goodness I'm an atheist.

Although I have to admit this nativity scene did upset me... 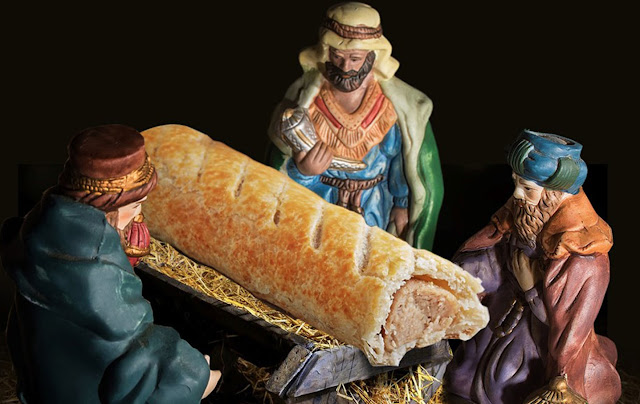 Not because of the usual reasons from the usual suspects.

The bakery chain Greggs has apologised for offending Christians with a nativity scene advert that replaces Jesus with a sausage roll. The chief executive of the Freedom Association, a rightwing pressure group, claimed the advert was “sick” and that the retailer would “never dare” insult other religions.

But only because it both infuriates and depresses me that I can't get a sausage roll as delicious looking as that one anywhere in Canada. !!#@!!

Or see how the creepy Andrew Scheer would react to that ad... 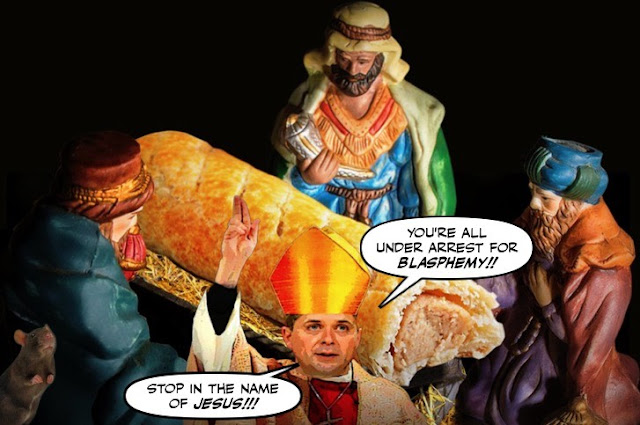 Which would be both entertaining and revealing.

And would at least serve to remind us how lucky we are, NOT to be living in Con Canada anymore.

Which reminds me, if you have any progressive friends who have forgotten that horror show, or know any old dotards who keep moaning about how Trudeau is worse than Harper !!#@!

May I recommend that you give them a Christmas coupon to Sgt. Harper's Paintball City.

And if that doesn't jog their memories, just remind them that the holiday spirit may be running low in Canada.

But it's not doing that great in Britain.

And it's definitely worse in America... 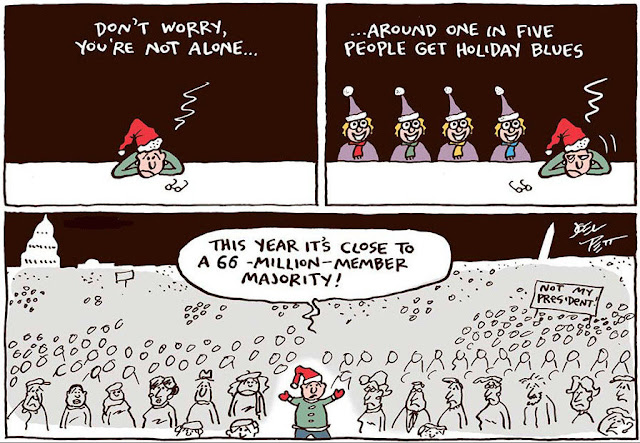 .. I started hearing and seeing 'seasonal ads via radio and TV in late October.. FYI the 12 days of Christmas commences on December 26, but there many variation to that old world 'tradition.

Bah - Humbug I say with malice & aforthought.. as 'Christmas Season' is now essentially 1/6th of the year, in duration and exists over a spread touching down in a 4 month of the year retail slap in your face, Yes santa dwarfs.. Even before Halloween now - its tr la la lala la la la la.. so October November December January. Yes, scampering elves.. I hear it in stores pre Halloween.. Hell we are being hammered on TV and on radio as retailers & services dig out Bing Crosby.. its unreal.. its surreal .. its ludicrous..

If asshats want to seize upon nonsensical 'christmas' advertising to vent their hate, spew their venom & ignorance, betray their own frighening sickness.. have at it.. find another store, blow up their tv's and toasters, wear blinkers and ear plugs - have a nice life as pus sack pricks..

But maybe spend some time gazing in the mirrow.. and contemplating the mess they are would be useful .. or doing something to help people.. instead of whining and wringing their hands..

My gripe is the ever expanding cnristmas season.. that's all
And I try to tune out all the commercial nonsense of it all
We aim for a nice turkey dinner at home, avoid travel
squeeze in the visits with family, prod the new arrivals, pat the dogs
hoist some libations & keep the sidewalks clear..
10 days does it for me...
tra la la la la
lalala la ! !

I don't know, maybe a Sausage Saviour might be something this old atheist could sink his teeth into.

My response was similar; I want a sausage roll. After my wife had a heart attack we have been on a low sodium,low sugar, low saturated fat kick. I figure when I get to be 75 ( 5 years ) I can quit because I'll die soon no matter what. I'm going to go on a sausage roll and Guiness diet at that time.

As if the world wasn't insane enough, now comes the War on Christmas. Sometimes I think the Internet is great, but more and more these days I find myself longing for the good old days.

That famous photo of Trudeau at the Calgary Stampede holding a Syrian baby named after him -- while being thanked by the baby's mother, a refugee wearing a veil -- is more "Christian" than anything these idiotic con bigots can come up with.

The cons and their counterparts among God's Own Pedophiles of the USA are the party of King Herod and the moneylenders in the temple. All Justin wants is to welcome the stranger through St. Pierre's Gate. War is over if you want it. The "religious values" tribal blood-cultists clearly do not.

This predates mass adoption of the Internet and social media. Bill O'Reilly, patron saint of conservative hypocrites and fighting-Irish wife beaters, is the one who issued the papal bull(shit) ordering a crusade against secularism and pluralism from his idiot-box bully pulpit about 20 years ago. But the common denominator for the US and Mother England is none other than Rupert Moloch.

Hi Salamander....You grinch 😉 However, I know what you mean, the Christmas shopping frenzy does begin awfully early and in my neighbourhood quite a few people already have their Christmas trees up. I don't like shopping or most of the trappings of the season, but I like to think that it's a good excuse for people to be nicer to each other than they normally are. So I find bigotry even more disgusting when it rears its ugly head. I will have a quiet holiday as I usually do, give thanks for the simple things in life, and of course try not to eat too much...

Hi WILLY....I don't see why us atheists can't worship at the plate of the Sausage Saviour, along with a full helping or blessing of the Great Spaghetti Monster...🙄

Hi rumleyfips....My doctor has also commanded me to eat less salt AND sugar. So basically I can't safely eat anything. But in my small Scottish town where my family there is a shop that has won an award for the best sausage roll in Britain, not once but twice. It's just down the road from another place that has been honoured for its Scottish pies. And the giant Walker's shortbread factory is only a ten minute drive away. So while Christmas might be a bit bleak, and the pudding my Mum sends me is mostly eaten by my friends, every year in Scotland I get to go absolutely wild!! 😀

Hi anon 4:01pm...I know how you feel, and I have been trying to reduce my time on social media. But as long as you can be choosy and don't get caught up in the madness out there, it can still be a useful tool for countering the Con media and fighting for social change...

HI anon 5:48 pm...when I went looking for a way to illustrate this post I came across a large number of images of Bill O'Reilly wearing a military helmet accompanied in many cases with a picture of Jesus with a machine gun. And when I thought of how low O'Reilly has fallen, my heart was filled with holiday cheer....

Hi anon 5:40 pm...I have tried to understand why the right in this country hates Justin Trudeau in such a bestial manner, apart from the fact that he is so successful. I can only conclude that it's because of the way he has welcomed refugees, and the way he has embraced the rights of women and gay Canadians. Since I support all those causes, and believe that Trudeau embodies what I consider to be our Canadian values, I intend to support him and fight for those values as strongly as I can...

When you look at Christmas and how its modern incarnation developed from an historian's perspective, claims that there is a "war on Christmas" are just absurd. I strongly suspect that this is one of the few ways theists have left of making the Christian religion relevant. Their Bible fails as a science book, a history book, a law and ethics book so thing they have left is to try to make it culturally or socially relevant and the so-called "war on Christmas" is part of their sloppy kindergarten-level apologetics.

hi Way Way Up....you're absolutely right, although as you probably know I'm a bit sentimental about the spirit of the season. I like the lights, the music and the food, and I like to cling to the illusion that whatever holiday you celebrate it's a time to try to be nicer to each other than we normally are. I just want to make that clear so people won't ridicule me later ;)
But yes, the idea of so-called Christians using the holiday to play bigot games is absolutely disgusting, and makes a mockery out of the Christian faith...