The Pee Tape Story Comes Back To Haunt Donald Trump 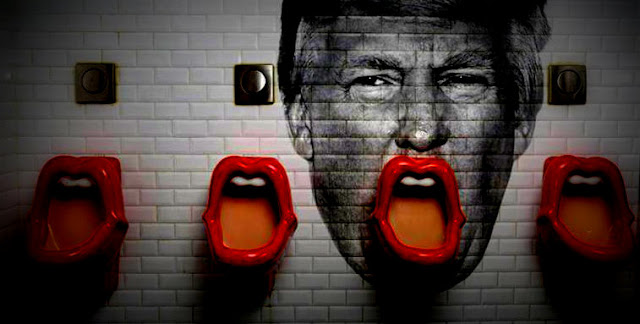 It's been almost a year since Donald Trump was presented with a top secret dossier, that included an unsubstantiated report that he was being blackmailed by the Russians.

The chiefs of America’s intelligence agencies last week presented President Obama and President-elect Donald J. Trump with a summary of unsubstantiated reports that Russia had collected compromising and salacious personal information about Mr. Trump, two officials with knowledge of the briefing said.

After allegedly being secretly taped holding a sex party in his hotel room with a group of Russian prostitutes.

And getting them to urinate on a bed that had been used by Barack and Michelle Obama.

Trump vehemently denied the story, claiming it was pure fiction.

But now the so called Pee Tape story has come back to haunt him. 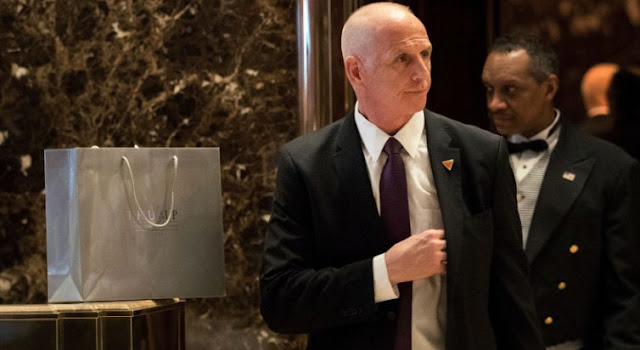 After Keith Schiller, his former security chief, testified that Trump was indeed offered to romp with in his hotel room.

President Trump’s longtime director of security told House investigators this week that a foreigner offered to send five women to Trump’s hotel room during his visit to Moscow in November 2013.

Keith Schiller told the House Intelligence Committee on Tuesday that he rejected the offer from the man, who appeared to be Russian or Ukranian, according to two people familiar with the discussion. He quickly dismissed what appeared to be a suggestion of procuring prostitutes for Trump, they said.

But said he rejected the offer and so did Trump.

But then this happened.

Schiller then dropped Trump off at his hotel room, stood outside the door for a while, and eventually left. Beyond that point he could not account for the goings-on in Trump’s hotel room, but the sources told NBC that Schiller professed to be “confident” that nothing had happened.

And when I think of Trump alone in his hotel room.... 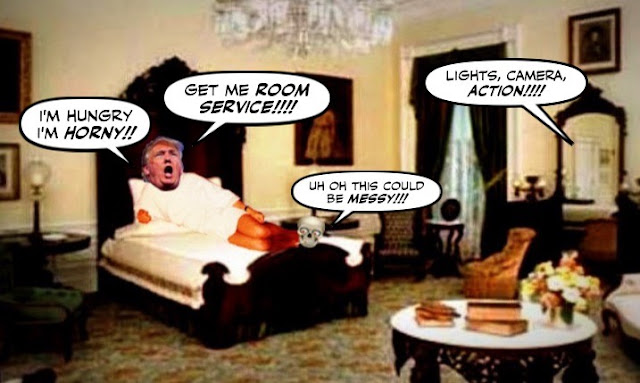 And knowing what kind of man he is... 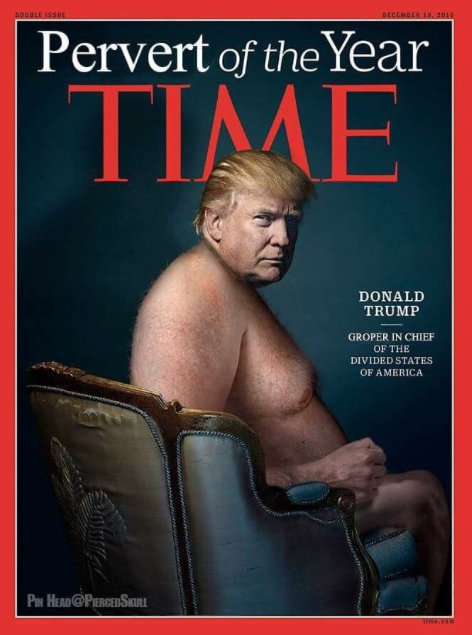 I don't blame some people for jumping to conclusions...

Schiller can’t say what happened after that.

And I'm not surprised I felt like this back then... 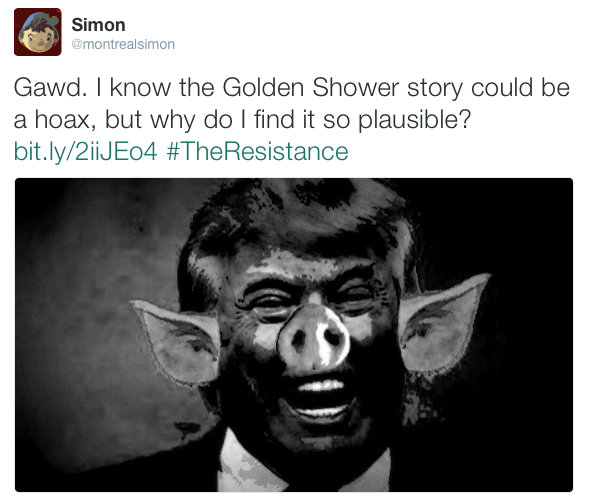 And I'm also not surprised that Robert Mueller was interested in finding out more about what might have happened that night in Moscow.

Ever since the dossier came to light in January, Trump and his allies have repeatedly insisted that it is a complete work of fiction. He told The New York Times this summer that the dossier "was totally made-up stuff." In a series of tweets earlier this year, Trump said the memos were written by a "failed spy" who had relied on "totally made-up facts by sleazebag political operatives."

Because somehow it seems less like fiction than it did before, and one thing is for sure.

The more you know about the monster Trump, the less you can trust him.

And the more he disgusts you... 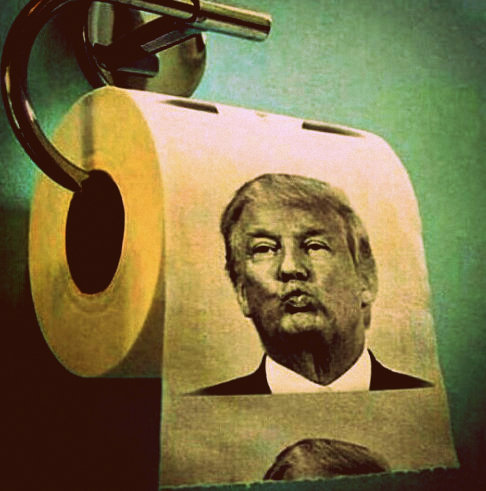 The even biglier thing to look out for is whether these were underage sex-trafficked prostitutes. Sex trafficking, particularly of minors, is epidemic the world over, but an especially prevalent cottage industry in Russia and Eastern Europe. We know Trump obviously has a predilection for the younger kind. It's well-known that he barged in on the dressing room of his teenage beauty-pageant contestants and has made vile sexual comments about his own daughter on, of all things, the Howard Stern radio program. His "affectionate" nature towards "adult" Ivanka is just as creepy now as a number of photos taken while she was a child -- cuddling daddy in his bed, leaning up against him in a seductive manner, even giving him a lap dance at a Beach Boys concert in Florida in the late '80s. "God only knows" what else he's done...

With all the revelations coming out about Hollywood (the monstrous machine that, whether they want to admit it or not, enabled his ill-gotten "fame" for 30+ years), I'm reminded of an unforgettable snippet from the actress Tatum O'Neal's memoir about her own destructive father, Ryan O'Neal: she said that he offered his little girl up as collateral to a drug dealer to whom he owed a debt. ("Love" means never having to say you're sorry?) Keeping that in mind, I don't even want to think about the possibility that Trump may have "passed around" Ivanka to his Russian thug puppeteers or New York business associates, but I wouldn't put it past him either.

My heart therefore breaks for little Barron and also Dotard the monster's grandchildren. This "man" is a sickening, bestial predator who will stop at nothing to satisfy the vices he feels he is entitled to -- all the better for him if he makes a quick buck while doing so.

And Republicans have the gall to point the finger at Hillary Clinton for "pizza" nonsense, speculate that Barack Obama had a (consensual) gay love affair at the Chicago Y.M.C.A., and allege that his wife Michelle is concealing a presumed transgender identity. Bill Clinton, meanwhile, was certainly a workplace womanizer of the Kennedy variety, but nothing he did ever amounted to the kind of things Donald Trump has the capacity and likelihood to do.

In today's dodgy dossier news: Fusion GPS did opposition research on Clinton and the information was offered to Donnie Jr by Natalia. Yesterday , reports surfaced that security services for a number of countries have a number ofdifferent Trump sex tapes.

Let's be clear on what we know so far.

- According to multiple sources, an associate of Emin Agalarov offered to send five women to Trump's hotel room
- Emin Agalarov is a Russian pop star whose father is a billionaire oligarch close to Putin
- Trump and the Agalarovs worked together to bring the Miss Universe pageant to Moscow and Trump appeared in a music video for Emin, i.e. their relationship is pretty close
- Schiller testified that he took the offer of women as a joke when it was made around lunch-time and declined it
- That evening, Schiller told Trump about the offer on the way up to his hotel room
- Schiller then spent a few minutes outside Trump's hotel door and left

As far as I can tell, the scene in Simon's third picture above is exactly right.

Cheep Shot Simon. Trump is everything wrong in the universe but he seems when it comes to to be bedded down one who expects it will be free. Old school and who knows why he gets the girls, but he has down exceptionally well with marriage and why would he stray?

I followed the Vanity Fair link that you provided above (https://www.vanityfair.com/news/2017/11/keith-schiller-donald-trump-russia-hotel) and noticed that you had completely failed to note the following paragraph at the end of the referenced article which stated this clearly: "In a statement, Schiller’s lawyers said that “the versions of Mr. Schiller’s testimony being leaked to the press are blatantly false and misleading,” and that the leaks were motivated by “partisan insiders.”

Did you genuinely miss that?

What I want to know is did those prostitutes pee on the bed or pee on Trump? Isn't that important and am I the only one who wants to know?

Christopher Steeles, the ex British spy who authored the Trump dossier, is being sued for libel by one of the Russians he named in the dossier.

We now know that GPS Fusion, a firm with a reputation for doing political smear jobs, was paid about $5.5M by Hillary campaign and $3.5M by the DNC. Coie, the lawyer representing both the Hillary campaign and DNC, had admitted that his law firm had paid Steeles $1.2M for the dossier. Two reporters at NYT (one of them being Maggie Haberman) had angrily stated that Coie had lied about this when they had asked him about it.

Remarkably, Hillary Clinton, John Podesta (who led the Hillary campaign) and Debbie Wasserman Schuultz (who was the Chair of DNC before she had to resign in shame after the Wikileaks revelations showed that she and the DNC had stacked the deck in favor of Hillary against Bernie Sanders) are all running like rats for the hills and claiming they had no idea, no idea at all, of the dossier's existence until they read about it in the press. Could it be they are afraid of being sued for libel too, would you think? Why deny knowledge if it is only legitimate opposition research, as Hillary had claimed?

And why would they (Hillary, Podesta, DWS) think anyone with half a brain would believe that they had absolutely no idea of the dossier even though they had paid GPS Fusion about $9M combined from which GPS Fusion paid Steeles?

Nothing in those 2 articles (WaPo, Van Fair) provided any evidence, new or old, that Trump did what he was alleged to have done.

In fact, it should be clear from all the denials from Hillary, her campaign and DNC that these people are running scared of being sued for libel. Especially since Donna Brazile has now admitted that she regretted unethically passing those debate questions to Hillary before the CNN townhall debates with Bernie Sanders (first revealed by Wikileaks and which Brazile had originally denied doing so), had now publicly proclaimed in her book that Hillary and the DNC had essentially rigged the nomination process in her own favor(Brazile called it a "cancer" and denied she had used the word "rigged" but her meaning was clear to many people).

Surely, you knew all that, Simon? If not, you should have.

Given the Groper In Chief's history of sex parties and now confirmed opportunity to experience a Russian version it is highly probable that Pee Gate or something very similar occurred. In addition to feeding his narcissistic ego it is also a fairly common frat type bonding ritual to seal unsavory business ventures. Something like earning a gang patch without the spilling of blood but the Dotard didn't realize he was earning more than a business patch. But that strategic error was 4 years ago an eternity for someone who thinks in Twitter time.
RT

none of us know for sure what went on. It just says enough about Trump that we actually thing it might have happened.