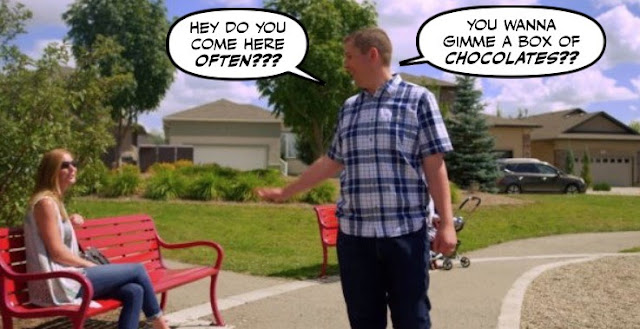 When we last left Andrew Scheer he was walking through a quiet suburb looking like a dazed Forrest Gump, or a weirdo trying to pick up women.

And now we know what the ad produced by his new Mini-Me, Hamish Marshall, the nasty little man who used to work for the hate mongering Rebel, is supposed to do.

Introduce him to Canadians.

"Millions of Canadians don't know Andrew – and we need to change that," Marshall said in a pitch to party members in which he lauded Scheer as a "devoted father of five" who is "true to his conservative principles, in politics and out."

Even though he has been in Parliament for THIRTEEN years.

But here's what I really don't understand. 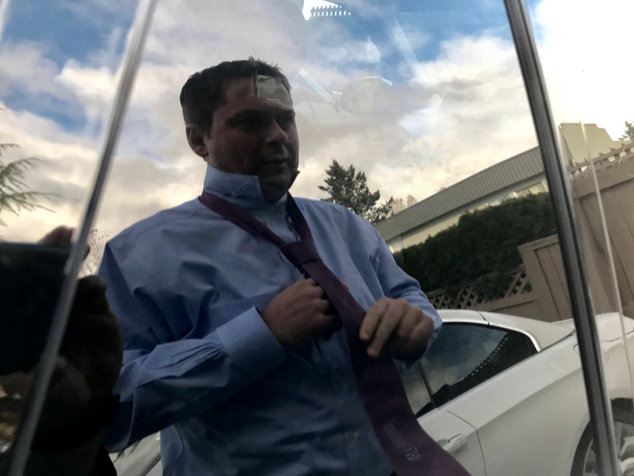 Why is Marshall trying to portray the two-faced Schmeagol as a harmless suburban dad?

"The Liberals can take their cues from the cocktail circuit. We will take ours from the minivans, from the soccer fields, from the legion halls and the grocery stores.''

When he's as sinister as can be, and likes to schniff and drink as much as many other Canadians.... 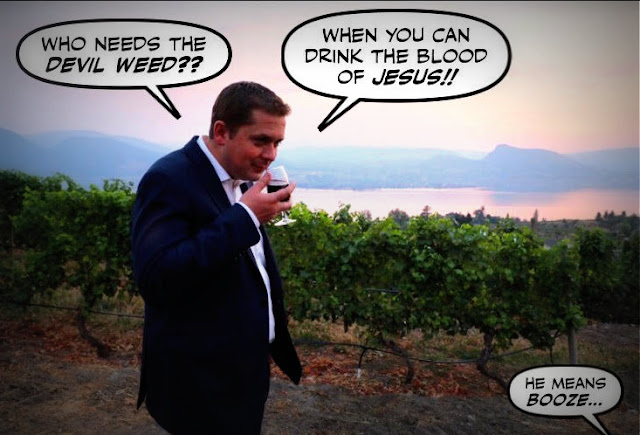 But wants to re-criminalize marijuana, so he can throw even more young people in jail.

And his other true"conservative principles" make him more of a monster than anything else... 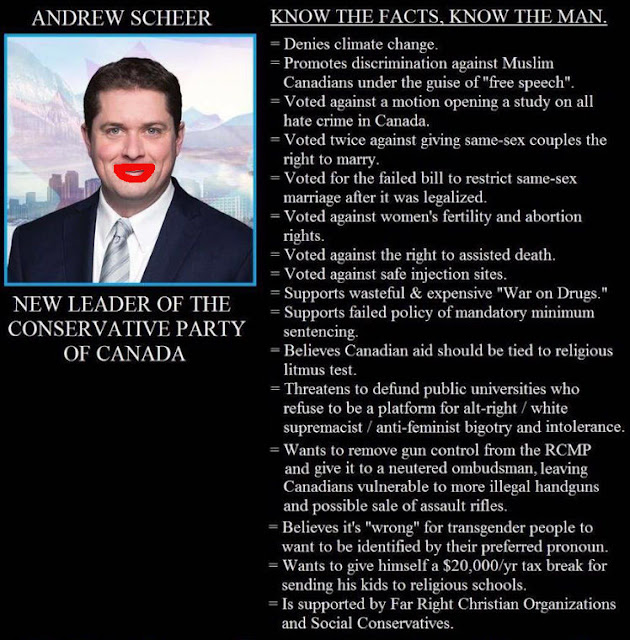 And even a thick coating of lipstick can't disguise that he's as typically Canadian as a three dollar bill.

Which in turn makes me wonder why the grubby Con media insists on comparing him to Justin Trudeau.

The suburbanites who greet Scheer as he meanders by are all on a first-name basis with him. They’re glad enough to see him, but not inspired to rise from their benches. A young couple strolls past him without taking any note. Nobody follows or ventures to engage with him.

Trudeau is first shown at a podium engulfed in a delirious crowd of thousands. In the montage mixed with his speech, strangers press close, he clasps their hands, smiles warmly at close range, plays with kids. Just saying “hi” would never suffice.

When Justin is a man of the people.... 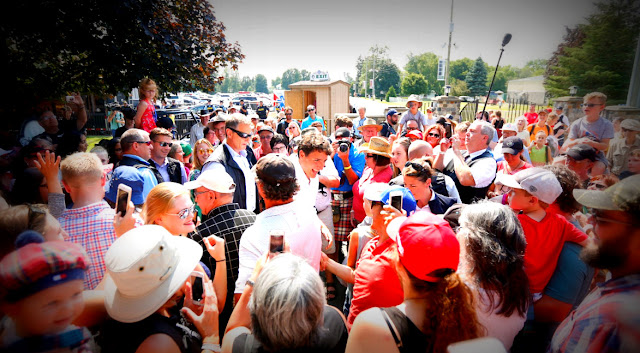 While Scheer is a freakish religious fanatic who is best compared to Jason Kenney, whose "true conservative" principles he shares absolutely... 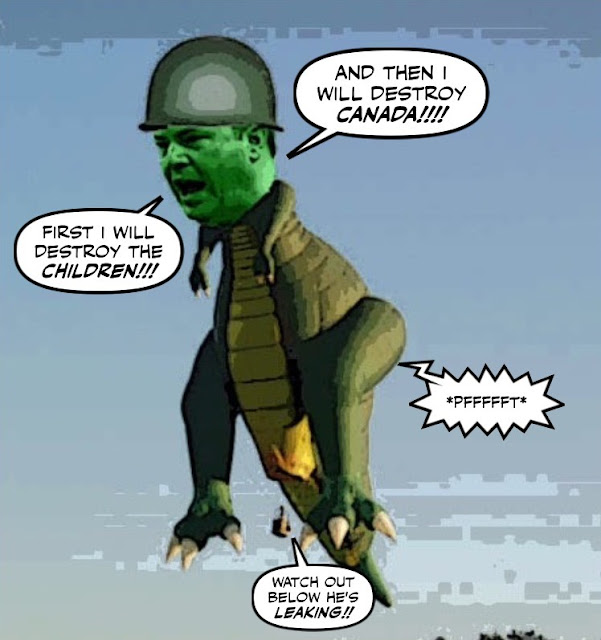 And what our wretched media should be asking Scheer is whether he too would go after bullied children.

Or try to punish women for having an abortion. Or whether he still believes gay people are "aberrant."

The dirty creamy bigot, who would threaten the lives of a million Canadians.

And of course what did he mean when on this new poster he talks about "those who would denigrate our country?" 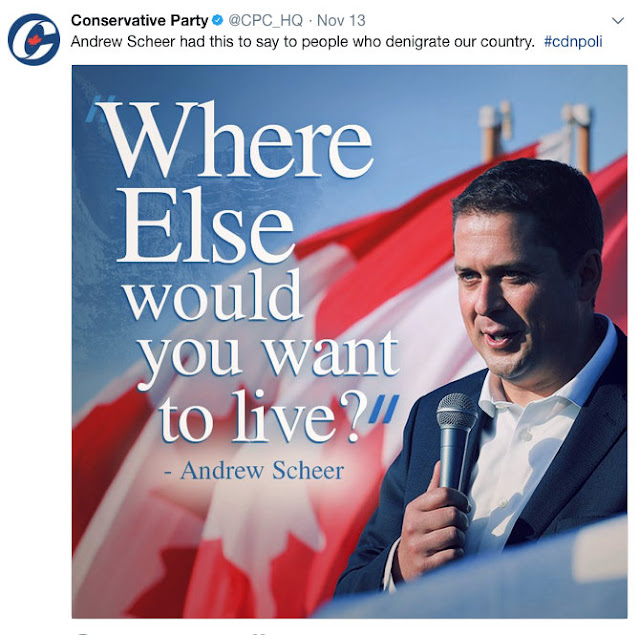 Because it sounds really threatening, or really fascist, and a lot like what Stephen Harper used to say near the end of his depraved regime.

And we all know how that turned out eh?

So why would we expect anything different from Harper's two grubby disciples? 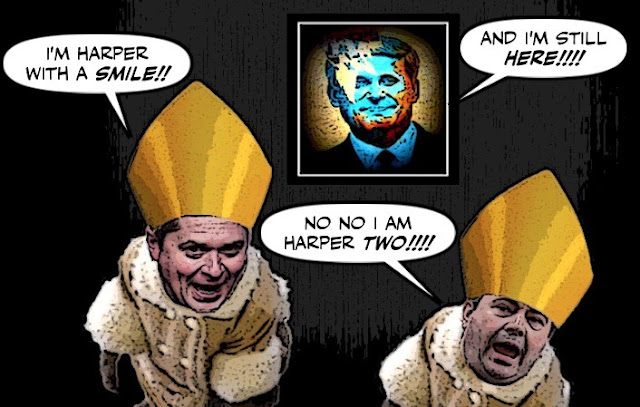 When will the media start noticing how similar they are?

And stop trying to elect Scheer by spreading his filthy lies...

The Con media can huff and they can puff, and they can blow Scheer and Kenney until they are blue in the face.

But this is a crowd of more than 800 people lining up to see Justin Trudeau yesterday at an event in British Columbia...

I guess the new generation knows bigots when they see them.

And they will send those dirty Cons to the final resting place where they belong.... 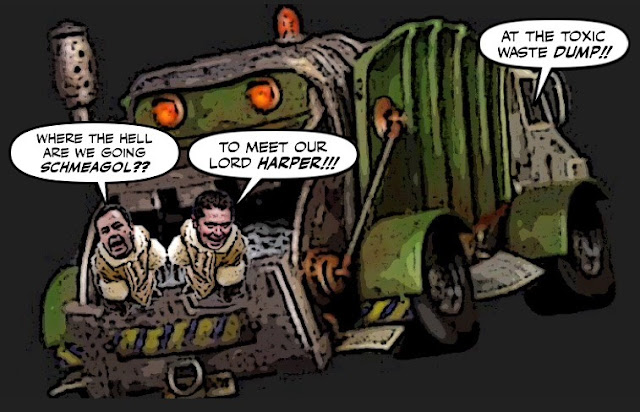 Jagmeet Singh called Trudeau "elite and out of touch." Jagmeet Singh went to a private American high school that charges 27,000$ a year in tuition. Sick of the ndp bullshit as well. Trudeau has never hid the fact that he was born into wealth and privilege.

If you look at Scheer's record it's not only as bad as Kenney's record,it is as bad as Trump's dossier. Every Canadian needs to take a good look at Scheer and expose him for who he really is. A man who hires people from Ezra Levant's Rebel has no business being in Parliament let alone running for Prime Minister. Stop him before it's too late!

Forrest Trump is more like it. He looks like the kind of guy who shouldn't be allowed anywhere near a playground or public park. The level of overt religiosity is almost always connected to nefarious behavior or belief systems as a way to compensate or hide wrongdoing or malicious intent. The only thing he and Jason the Hockey Mask are missing is a Roy Moore cowboy getup and clown makeup for their circus tent revival act. I look at this beady-eyed creep and I see Andrew Wayne Gacy.

Scheer and Kenney are both right-wing Catholic extremists. Kenney caused a scandal when he was at a Catholic university in the U.S. when he accused the university of being too soft on abortion and homosexuality. And Scheer's record clearly shows that he shares those views. If the media had done their job during the Conservative leadership race this never would have happened.

Just visiting, eh? Well, that didn't take long. I knew it wouldn't take long for him to drop his bullshit "love and courage" veneer as a discount-bin version of Barack Obama ("hope and change"), and move on to petty attacks against Trudeau. Meanwhile, if Scheer and the cons were in charge, Singh would be one of the first up against the wall and packed off to Gitmo for looking funny, whereas Trudeau once joked that he had more Sikhs in his cabinet than Narendra Modi. He has never hid the fact either that he, like his father, believes fervently in Canada being a multicultural tapestry (or the Federation of Planets, considering his "Trekkie" background). What a fraud.

if Hamshit is trying to make Scheer look like a nice guy, it's because, as you yourself have pointed out, the Schmear character isn't working. That Christianist always overplays his hand, and CPC polls are probably showing that Canadians are rejecting that approach.

When we will see the picture of little Andy with his banjo ? Da da da da dat.

Singh is an arrogant fake

I try to stay away from criticizing the NDP and the Greens in the hope that one dreamy day I can help unite the left into a massive movement that will crush the Cons forever. So I am disappointed to hear that Jagmeet Singh is trying to tear Justin Trudeau down instead of competing with him to see who can inspire us the most. He should stop listening to the anti-Trudeau fanatics in his party, and stop acting like a Con, or he will get nowhere...

Hi anon 9:49...I've been trying to get people to look at Scheer's record from the moment he became Con leader, but it's not easy, I am the only blogger at Progressive Bloggers who regularly goes after Scheer, and the Con media is useless. I actually saw that little Kady whatever her name is claiming on Twitter that Hamish Marshall isn't a bad guy. As if anyone who works for Levant isn't necessarily a racist. It's sickening, and another example of how moral boundaries are falling in the age of Trump. I however will never give up...

Hi anon....it is an absolute farce, and to make matters worse I see some in the Con media, like the Trudeau hater Martin Patriquin, are going around saying they found that absurd ad "brilliant." It's beyond belief. I will make my own video version this weekend, and I will keep on trying to warn people that Scheer is a dangerous political predator....

Hi anon 10:40 am...yes, I've seen a video of Kenney taking on that American university, which you can see on YouTube. And Scheer's record is just as bad as Kenney's. Unfortunately because Scheer was the Speaker for years nobody bothered to examine his past, and during the campaign he got a pass from the media, because they were obsessed with Leitch and other more obvious wackos and bigots. It will be up to us on social media to dig up Scheer's past and expose him, and I for one welcome the challenge...

Hi anon 12:03 pm...yes, that is the real reason Marshall is trying to make Scheer look like a nice guy. The Con media have played so many clips of Schmear attacking Justin Trudeau, that he has turned off many Canadians, and their own polls are showing a backlash. Canadians don't like that kind of negative politics, it didn't work for Harper and it won't work for Scheer....

Some of my old links to CBC website blog concerning Sheer's partisan behavior as a Speaker of the House don't work, but I was able to access them through Katy O'Malley's blog. Good to read the past, as many of his rulings as Speaker should be enough to disqualify him from being a dogcatcher, let alone a member of the House, as he is not willing to represent all Canadians, just those who agree with his view. Justin tries to be inclusive, but he is attempting the near impossible- trying to align a machine that has too many cog wheels that are out of harmony with the path he is trying to take, so some departments are pulling to the right. Until the Harper appointees are neutralized there will be continued interference from Directors and members of government boards like the CBC.
As far as a difference between Kenny and Shpenny, there is little, once one looks over the hood and sees the fanciful utopia they want us to drive- back to '50's music, greased back hair, and poodle skirts, where minorities and others knew their place, teens went to chaperoned sock hops, and gays, unwed mothers and the disadvantaged were hidden from sight, where science was secondary to religion and laws upheld a strict code of morality, where infectious diseases were a problem due to lack of healthcare funding and where unions were still weak and businesses had the power to physically exploit workers, with little regulation of big business in respect to the environment or worker safety.
Of course they want this with less taxes and with no disruptions of essential services already in place. Dreaming is fine, but regressive dreams are dangerous when held by those with power.

Hi rumleyfips....that's almost too easy, and I will have to get a squealing pig into the picture, but I think it can be arranged...😉

Sorry Kathleen, I think it was actually the archive for her Inside Politics blog on the cbc website, which link I have lost as my antivirus deleted my internet history last night. The best I can do is point you to the archives which also has posts by other reporters
http://www.cbc.ca/newsblogs/politics/inside-politics-blog/2013/12/