Why The Con Media Failed To Bring Down Justin Trudeau 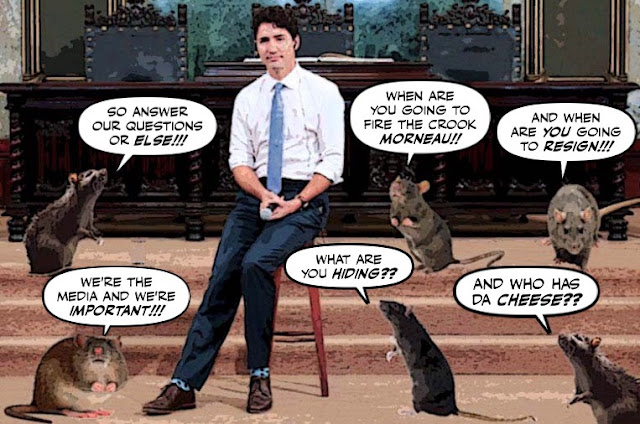 It was one of the most disgusting political spectacles I have ever witnessed. A bully show if ever there was one.

The ratty con media ganging up on Justin Trudeau and demanding that he serve the decent Bill Morneau on a bun, with a big piece of cheese

To the great joy of Andrew Scheer and his grubby Cons.

But when it was over, or yesterday's story, nothing had really changed.

And even the Con friendly Jamie Watt had to admit that Trudeau is still on top.

Based on the apparent furor that has been going on in recent weeks, one would expect a government that was facing significant political headwinds with the voters. But recently, signs have emerged that suggest the outcry may be more of a tempest in a teapot.

The Liberal's stunning by-election victory in Quebec has shown that the ratty media has been gnawing on the wrong issues.

First, the opposition is making a lot of noise, but has been largely focused on issues that aren’t as important to Canadians. The criticisms they have been lodging regarding Trudeau’s tax changes and deficits simply aren’t moving the dial.

Second, the Ottawa echo chamber — where journalists and opinion leaders talk among themselves about the issues they deem worthy of attention — is getting louder and louder.

To be fair, it’s a democratic echo chamber. Anyone with a Twitter account can engage a journalist, celebrity, or member of Parliament.

But the problem is that most Canadians simply aren’t interested in the minutiae that consumes political Twitter. Canadians don’t care about the proceedings of a committee or the amendment process on legislation.

Canadians don't care what those pompous asses in the little village of Ottawa do to try to keep themselves from dying of boredom.

But for being seen to bully a decent man like Bill Morneau, while failing to go after the creepy Andrew Scheer for turning the Cons into an alt-right party.

Or failing to ask him why he ran for cover when asked about his good buddy the Rebel director Hamish Marshall...

Or for failing to ask Scheer to comment on this treasonous story. 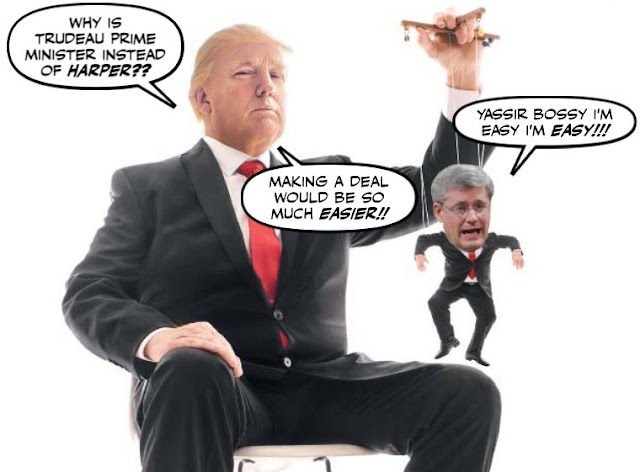 And denounce his fallen leader for selling out his own country, those Con rats will pay a heavy price.

For I can't believe how many ordinary people have told me in the last few days how disgusted they are, and will never trust them again.

And when "journalists" lose their credibility it's almost impossible to get it back.

And don't those rats deserve it?

They set out to destroy Justin Trudeau, but they only destroyed themselves... 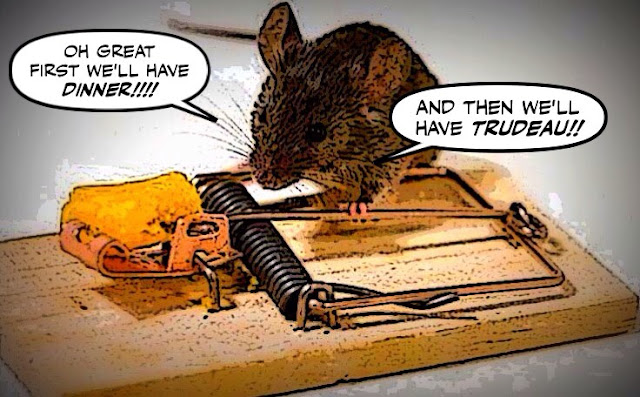 If anything, it looks as though Canadians are proud of the Trudeau team for standing up for environmental, Indigenous and labor concerns in NAFTA, no matter what Harper and his minions are griping about. Even we Americans in resistance to the Trump regime are looking to the Canadians and Obi-Wan Trudobi as "our only hope." Mexico must certainly be relieved as well that their northernmost partner isn't throwing them under the bus and either turning inward or siding with the genocidal Trump.

Other than trolls on Trudeau's YouTube account (who you can tell are American or otherwise foreign, by their calls to "impeach" when no such mechanism exists in the parliamentary system), all I can see on the social media front are complaints that no one is bothering to press Scheer on his ties to Rebel Media or expound on how awful that hate site is. Also, plenty of Canadians are P.O.'ed with Harper, telling him to STFU and go home. To give you an example of how livid people are with him, a thread I saw on one site was asking if he was cranky because he ran out of feral kittens to eat. So this move by Steev Palpatine certainly seems to have backfired on the cons. Good riddance to bad rubbish.

Speaking of people who need to STFU and go home, Singh has already started up with petty playground insults against Trudeau. So much for love and courage, eh? He recently said that Justin is an "old man," that his beard is nicer than Justin's hair (while even some self-identified Sikh commenters have been saying that he is disrespecting his religion by leaving it unkempt, and that they actually like Sajjan's better). Meanwhile, the follicularly jealous Nathan Cullen said that Singh is a "nicer looking" man than Trudeau. Cue(ball) the inevitable punchline: "He's just not ready! No hair though."

What, no love for Guy Caron's ponytail or Movember beard wars between Singh and Mulcair? No catty fashion police snarking about Justin's 2011-era goatee? Bad enough the cons are a bunch of GOP North traitors and backstabbers. But what a bunch of preening, insecure, failed beauty pageant contestants the NDP has. They should go try out for Donald Trump's Miss Universe. Not that anyone would want to watch the bathing suit competition, of course...

I love those rats. Is the big fat one at the front Post media or the CBC? If the American media was as useless as ours, Trump would be using them like a carpet.

It's not just the media rats who must be disappointed, the NDP disgraced itself as well. Nathan Cullen was in there with his boyfriend Pierre Poilievre slandering Trudeau and Morneau. The results in Quebec should serve as a warning, but the dippers are so far gone I doubt they will.

hi anon...I really enjoyed reading your comment, although it made me feel that maybe I'm too soft on the Cons. ;) But yes, I believe our ratty corporate media is disconnected from the feelings of most Canadians, and that those of us on social media will be able to derail their Scheer Train. And as for the NDP, I don't think they know what they're doing. They are stuck at 15% or worse, and still they seem to believe that sounding like Cons will make them more popular. It's madness, and unless they change their ways they risk being wiped off the map in the next election...

hi anon...I think that big fat rat is Postmedia, after all they own most of the media in Canada and they couldn't be more Con. But you're right, the American media is doing a great job of standing up to Trump, while our shabby rats try to elect the alt-right Andrew Scheer...

hi anon...as I just said above, I feel sorry for the NDP because I don't think they know what they are doing. If they think they can win the support of progressives by sounding more Con than the Cons, or jumping into bed with the hog Pierre Poilievre, they are seriously mistaken and it will end badly...

So I guess your happy with paying huge interest payments to banks.
Quebec has been on the take since the 1950's.
I guess you guys can't even manage your own bank accounts. Enjoy the fact we keep your boat from sinking for the last +/-60 years.
Like every other year, Quebec will receive the most from equalization payments in the 2018-2019 year.
In the 2018–2019 year, the following provinces will receive equalization payments:
Quebec ($11.732 billion)
Manitoba ($2.037 billion)
Nova Scotia ($1.933 billion)
New Brunswick ($1.874 billion)
Ontario ($963 million)
Prince Edward Island ($419 million)
Find a job and get off the take there froggie!