The Resurrection of Kellyanne Conway 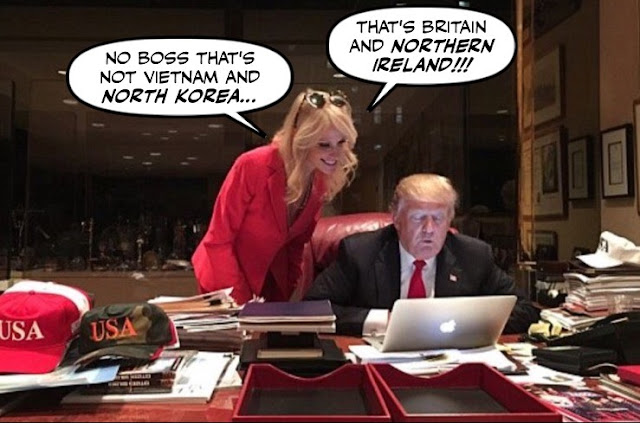 I'm sure you remember how Kellyanne Conway seemed to be everywhere after Donald Trump's election victory.

Offering the novice president advice, or acting as his mouthpiece on CNN and other TV networks.

But after a while she became a little too comfortable in the Oval Office... 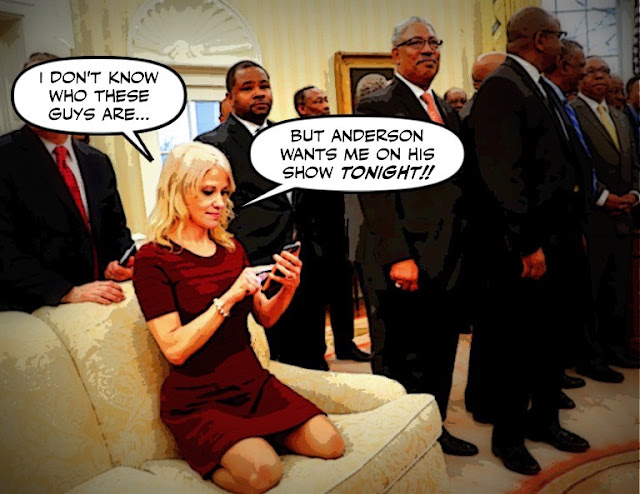 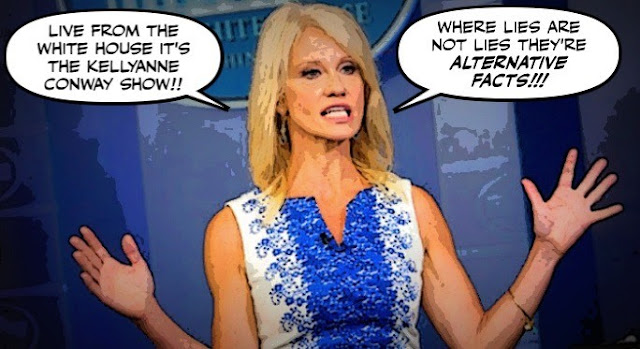 Especially after she told reporters that General Michael Flynn enjoyed Trump's complete confidence, the day before he was fired.

And not long before she was fired... 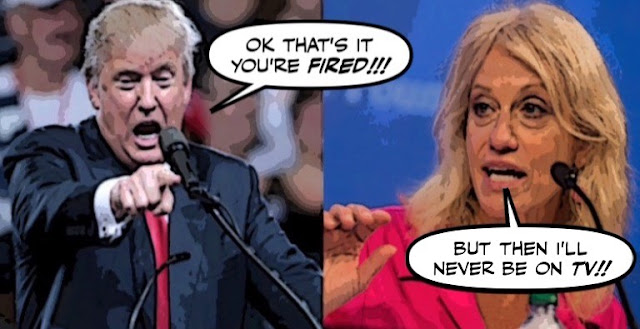 But Conway is not the kind of person to give up THAT easily... 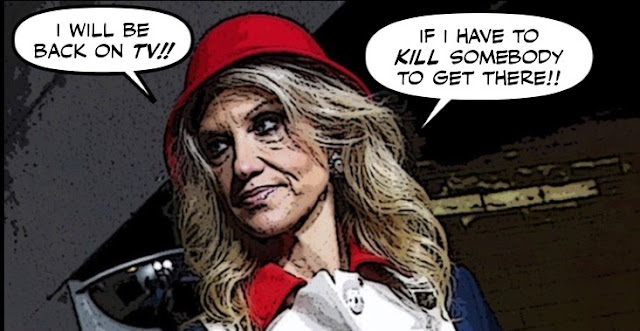 And she never lost her burning desire to be on TV again.

As Anderson Cooper recently found out, in a nightmarish episode of Saturday Night Live...

And the moral of this nightmare tale?

If you see Andrew Scheer also trying to imitate Pennywise the clown... 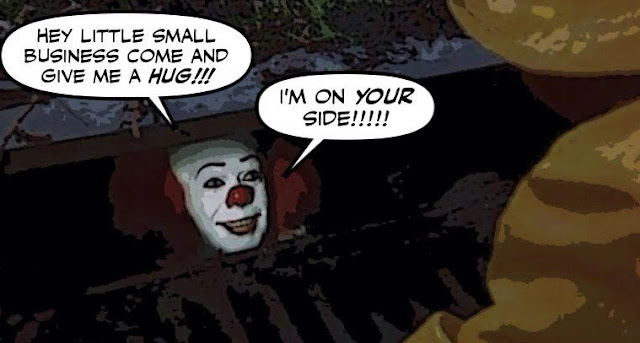 Whatever you do, don't go anywhere near him.

And Scheer is a nasty old Con artist, who should be in prison... 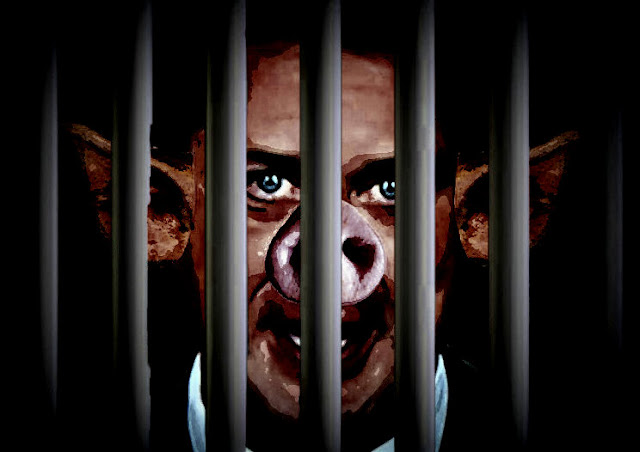 Paddington Bear wore that suit much better when he was seen dancing with Duchess Catherine the other day. Trump's wannabe PR spokesbot, meanwhile, has a perfectly fitting surname for how she presents "alternative facts" the "con way." These people will never disappear. Just like the molester priests who got shuffled off to "missions" in third world countries nobody cared about, the "wingnut welfare train" always sees GOP has-beens showing up as "analysts" or "contributors" on Fox and its attendant online and print equivalents. Chuck Norris even writes a column for World Net Daily. It's like the Dancing With the Stars of "news," or what years ago used to be Match Game and Hollywood Squares. They're like a bad S.T.D. that never goes away.

Wouldn't be surprised at some point to see Scheer or even Harper wash up on America's shores to join the peanut gallery of the world's bigliest con-media circus tent. America started out as a dumping ground for Britain's undesirables, and eventually it's going to be one for Canada's too. Nigel Farage already has a column at Breitbart and so does the E.D.L./PEGIDA hate hooligan Tommy Robinson. Don't even get me started on Piers Morgan at CNN. Milo too got picked from the garbage dumpster outside some seedy discotheque in London, and polished up (as much as a turd can be polished) by a wealthy patron named Robert Mercer. So on and so on and so on.

Hey, there's an idea for Trump's latest reality-TV venture! Maybe Conway and Scheer will hit it off? Or maybe Milo and Tomi Lahren will have a fight to be first in line for that dre-e-e-eamy Canadian hunk, Jason Kenney! Will Steve Bannon give Ezra Levant the rose tonight? Or will Ezra get smooched by Anthony the Mooch? Tune in to America's newest soap-opera dating game, "Who Wants to Be in the Same Room With an Insufferable Con?" hosted by Tucker Carlson, to find out! Sponsored by Koch Industries, Trump Steaks, and Russia Today.

Looking back now we can see that Conway was a warning of what would come next. More religious fundamentalists like her, and a collection of crooks and billionaires like America has never seen before. What makes it worse though is that many of those shady characters were turned into soap opera characters by the entertainment industry, and effectively normalized.

The White House complained that Mr. Corker had been “insulting,” as Kellyanne Conway, the president’s counselor, put it on Monday morning. “I find tweets like this to be incredibly irresponsible,” she told Fox News. “It adds to the insulting that the mainstream media and the president detractors — almost a year after this election they still can’t accept the election results. It adds to their ability and their cover to speak about the president of the United States in ways that no president should be talked about.”

How Anti-Trump Psychiatrists Are Mobilizing Behind the Twenty-Fifth Amendment
By Jeannie Suk Gersen, October 16, 2017
https://www.newyorker.com/news/news-desk/how-anti-trump-psychiatrists-are-mobilizing-behind-the-twenty-fifth-amendment

Donald Trump made 15 false claims in that interview with Sean Hannity (Oct. 17, 2017)
All together he made 720 false claims over his first 269 days in office— an average of 2.7 false claims per day. Trump has proven uniquely willing to lie, exaggerate and mislead. By all expert accounts he is more frequently inaccurate than any of his predecessors.
https://www.thestar.com/news/world/2017/10/17/daniel-dales-donald-trump-fact-check-updates.html

You don't even need a PhD to see that Dotard is deranged... Mama Maggie got it spot-on last October and nobody listened. They dismissed her as just a crazy kook and aging hippie disco queen, the mother of a telegenic "drama teacher" leader of a country America doesn't care about. Well, turns out she was right, and Justin too knows to play softball with him and snake-charm/Jedi mind-trick the beast because he's a rabid animal who you better not poke. Even Nixon wasn't this insane when he met with Pierre. Dotard is an absolute psychopath whose biography might as well be the entirety of the DSM.

hi anon...I have to admit when I read this I didn't know whether to laugh or scream:

Hey, there's an idea for Trump's latest reality-TV venture! Maybe Conway and Scheer will hit it off? Or maybe Milo and Tomi Lahren will have a fight to be first in line for that dre-e-e-eamy Canadian hunk, Jason Kenney! Will Steve Bannon give Ezra Levant the rose tonight?

It's just too horrifying and those Cons are just too monstrous. And besides, unlike Trump I have a moral compass. And I'd feel bad about dumping all that Con trash into our neighbour's side of the fence. But yes, it really is a horror show, and we're going to have to clean up the whole of North America before we can really feel safe and clean again...

hi anon...you make a good point. It's understandable, and a way to cope with the horror of the Trump regime, but when we turn some of those crooks and Con artists into comic characters, we do run the risk of humanizing or normalizing them. As I probably did with this post, by having a little too much fun...

hi anon...Margaret Trudeau may have had to struggle with mental illness, but she's far saner and a much nicer person than Trump could ever hope to be. Many older Canadians like Justin because he's the son of Pierre, but I like him because he's also Margaret's son...