Donald Trump and the Cannibals in Hollywood 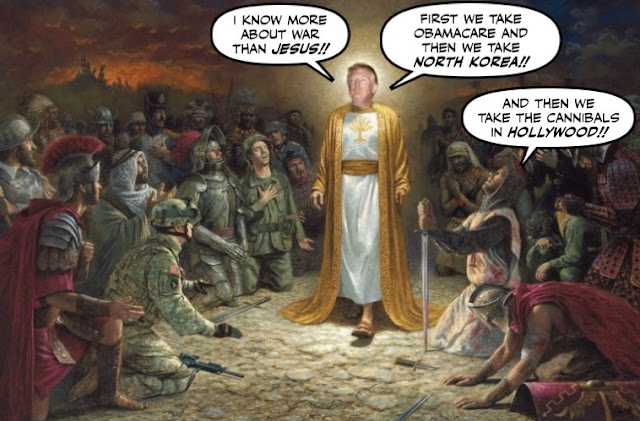 A few days ago I wrote about how Donald Trump is counting on the Christian right to help keep him in office, now that almost every other group is abandoning him.

And how that grubby pervert is now going around bellowing:

Which needless to say has the holy bigots in an uproar or a rapture.

But somehow I forgot to mention the day a group of them laid hands on him in the Oval Office. 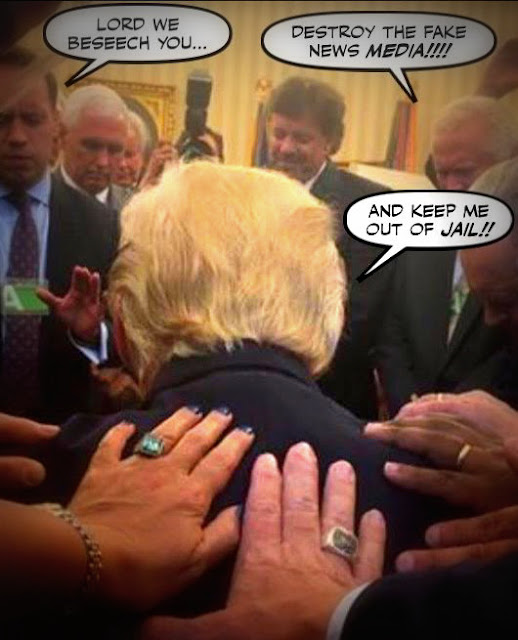 And how their leader, Rodney Howard-Browne, later claimed that the reason he prayed up a storm, and laid hands on the Orange Oaf, was to try to save his life.

“There is a planned attack on our president,” he said, “and that’s all I can tell you about right now; I know what I’m talking about, I’ve spoken to high-ranking people in the government and this is being planned by people that hate God, hate America, hate our president and we have to stop this, in Jesus name.”

But that was July, and now its October, and it seems Howard-Browne needs something new to keep those holy dollars rolling in.

So now he's claiming that Hollywood is full of cannibals who drink the blood of children...

And the questions I urgently need answered are:

One, how can a maniac like that be allowed to place his hands on a president?

Two, when will Trump's idiot followers realize that he's just a fraud artist? 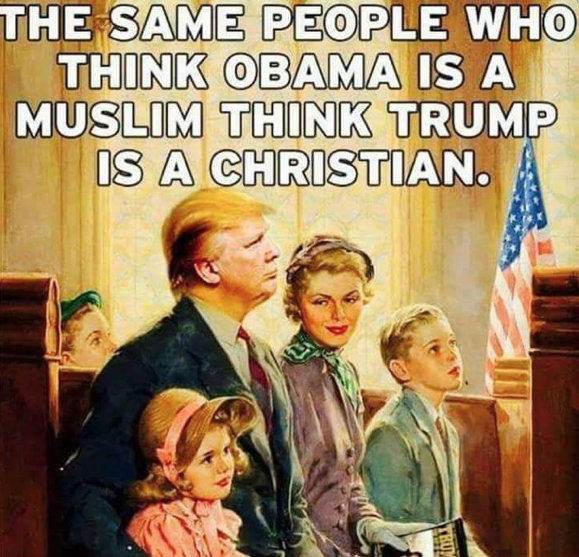 And they've been conned.

And lastly but not leastly, how soon can we build a wall between the U.S. and Canada?

In case this madness is contagious...

I don't think the madness is contagious. We voted Harper out of office. Now Scheer may be trying to get rid of our Finance Minister, but alas, it is not to be. Between them Trudeau and Morneau are much smarter and better looking than their Con counter parts.

I've seen the picture of the Christian Taliban "lay on of hands". Made me almost puke. Trump is a reality show star. it was right up his alley. Reality shows are just staged events to look real and provide entertainment which is cheap to broadcast.
Trump also has a great need to be idolized and that is what was happening there.
I can only conclude the Christian Taliban forgot about the worship of false gods......
How could they let these idiots so close to the President, well the president is an idiot also. they all deserve to be in the same room. Just too bad we can't send them to a room altogether some where far, far away from the W.H.

About all we will receive from the U.S.A. is a lot of refugees and we'll be fine with that. we are the country which took 100K Vietnamese refugees and did just fine.

Do some of Trump's mostly white, rightwing-nut Christian base actually hope Trump will push the button to bring the world closer to Armageddon?

But Jesus said: "Blessed are the PEACEmakers."

"Several months ago, a foreign policy expert went to advise Mr. Trump. … Trump asked three times, in an hour briefing, 'why can't we use nuclear weapons?'"

Time for All Christians to Denounce White Supremacy
http://www.thedailybeast.com/will-christian-leaders-continue-to-tremble-before-right-wing-hate

Why I am ditching the label ‘evangelical’ in the Trump era
https://www.washingtonpost.com/news/acts-of-faith/wp/2017/10/18/why-i-am-ditching-the-label-evangelical-in-the-trump-era/

The Religious Right Will Rise and Fall with Donald Trump
https://sojo.net/articles/religious-right-will-rise-and-fall-donald-trump

Why did 81 percent of white evangelicals support Donald Trump? The polling shows it was not mostly about abortion, gay marriage and religious liberty as some of their leaders suggest. Especially given the Democrats’ extremism on issues like abortion some of that would be understandable. But those “moral issues” were not the main motivators for the white evangelical vote. Instead it was guns, taxes, how much they would make from the economy, anti-immigrant and anti-refugee sentiment, and anti-terrorist and anti-Muslim visions of national security. Fox News seems to have set the white evangelical political agenda more so than the Bible all evangelicals claim to believe.