Donald Trump and the Revenge of Puerto Rico 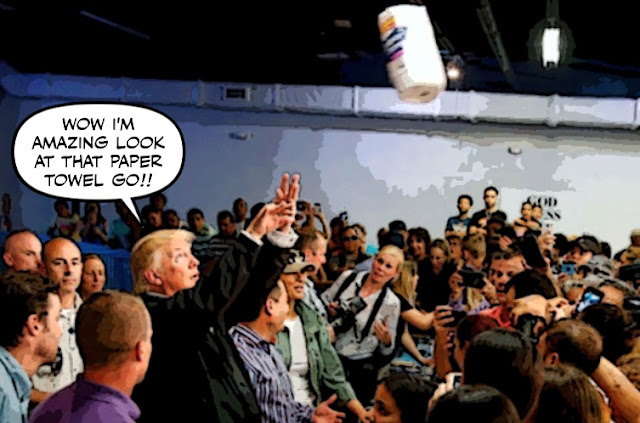 As I'm sure you know, Donald Trump's visit to Puerto Rico last week was the worst visit by a U.S. president, to any place, ever.

He insulted the people of that battered island by telling them to stop complaining because hurricane Katrina was worse. And they should save their energy to praise him instead.

He threw rolls of paper towels at them, and had to be restrained from throwing cans of chicken soup.

And as if that wasn't enough, he ended his Tour of Shame, by deliberately mispronouncing the name of the island.

While the Federal Emergency Management Agency did its best to make him look good,
by trying to conceal the seriousness of the situation.

But then who should be surprised by the Trump regime's racist contempt for the suffering people of that island?

When as Samantha Bee points out, the U.S. has been screwing Puerto Rico for about a hundred years.

Puerto Ricans may get the last laugh, and screw Trump and his Republican racists beyond recognition.

By handing the critical state of Florida over to the Democrats.

Every day dozens of Puerto Ricans straggle into the Orlando area, fleeing their homes and lives ravaged by Hurricane Maria. In the months to come, officials here said, that number could surge to more than 100,000.

And those numbers could remake politics in Florida, a state where the last two presidential and governor’s races were decided by roughly one percentage point or less.

The dotard may have thought he was funny.

But he won't be smiling for long...

The Repugs benefitted from the pro Batsita Cubans in Florida for decades. With this cohort dying out and being replaced by anti Trump Puerto Rican voters it will be interesting times indeed.

The Gusanos' grandchildren aren't nearly as interested in fighting Abuelo's wars: they want trade and cultural ties with Cuba. Even the more business-inclined among young Cuban-Americans view Cuba as an opportunity, not an enemy.

About 17% of Americans are Hispanics and Latinos:
https://en.wikipedia.org/wiki/Demographics_of_Hispanic_and_Latino_Americans

They will all remember Trump's slow response to Puerto Rico at the polling booth in 2018 and 2020.

oh, and Pennsylvania was won by 44K votes by Trump. However, it has a large P.R. population and with more moving there it may be another state Trump looses. this could be very good.

So.....which Americans will NOT be voting Republican in the 2018 congressional elections?

hi rumleyfips...yes, the Cubans in Florida have helped keep that state in the Republican camp for decades. but if the Puerto Ricans flock there now they could tilt the balance of power, and we'll never have to worry about hanging chads again...

hi lagatta...yes that's true, the younger Cubans are not as fanatical or Republican as their parents and grandparents. But the arrival of a large contingent of Puerto Ricans will settle the matter once and for all, and hopefully end the embargo, and the long suffering of the Cuban people...

hi David...I hope so. I was very disappointed that about 20% of Hispanics voted for Trump n the last election. I couldn't understand how any of them could vote for a bigot like him. But the way the Orange Oaf has treated them and the people of Puerto Rico will hopefully turn even more hispanics against him...

hi e.a.f... yes, it would be nice if the suffering of the Puerto Rican people, had a silver lining. And I for one would call it divine justice...

hi David...thanks for the link to that Lin-Manuel Miranda video. I speak Spanish fluently and love the Spanish-speaking Caribbean and their music. For more than ten years I've been spending my winter vacation dollars helping the Cuban people, but I may have to consider visiting Puerto Rico this year...