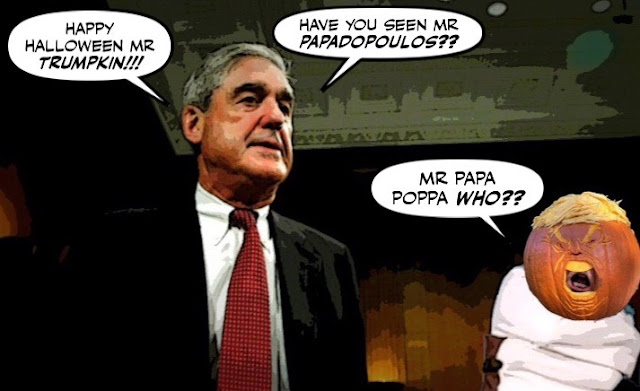 Well just as I predicted, it's Donald Trump's worst Halloween ever. What with Bob Mueller indicting three of his advisers.

As well as revealing that one of those advisers, George Papadopoulos, was collaborating with the FBI and may have been wearing a wire.

But despite that devastating news, many political observers were surprised by the way Trump was able to control himself, and only fire off a single tweet all day.

Until they discovered the horrible truth. 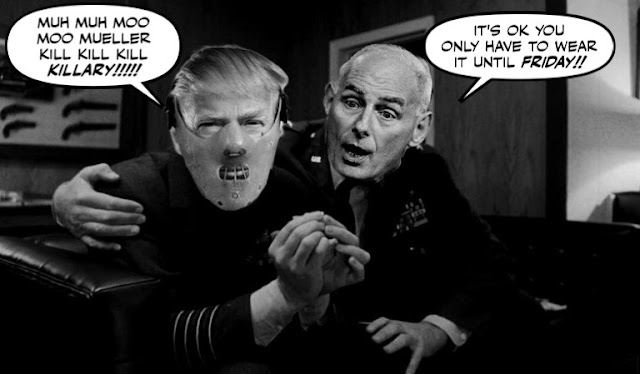 His aides were doing all they could to restrain him, but Trump was so angry he couldn't even make it to the Oval Office.

Separated from most of his West Wing staff — who fretted over why he was late getting to the Oval Office — Trump clicked on the television and spent the morning playing fuming media critic, legal analyst and crisis communications strategist, according to several people close to him.

And while at first Trump apparently felt vindicated, and fired off this tweet.

A few minutes later, court documents were unsealed showing that George Papadopoulos, an unpaid foreign policy adviser on Trump’s campaign, pleaded guilty to making a false statement to the FBI about his efforts to broker a relationship between Trump and Russian President Vladimir Putin.

And although Trump did make it to the White House halloween party... 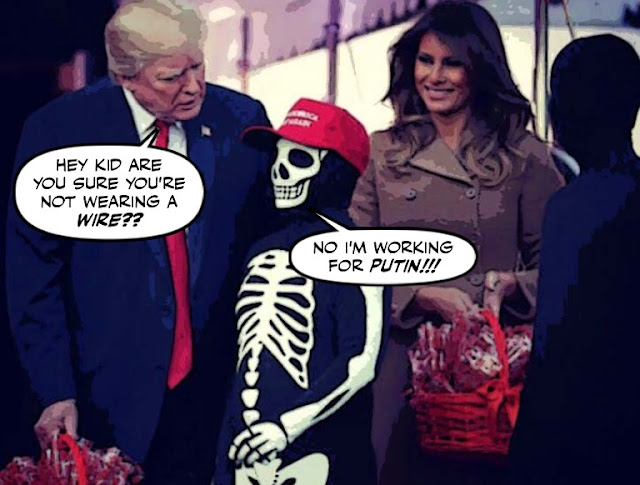 Elsewhere in the White House the mood couldn't have been grimmer.

Trump’s anger Monday was visible to those who interacted with him, and the mood in the corridors of the White House was one of weariness and fear of the unknown.

“The walls are closing in,” said one senior Republican in close contact with top staffers who spoke on the condition of anonymity to speak candidly. “Everyone is freaking out.”

And who can blame them? They should be scared. For George Papadopoulos seen here with Trump... 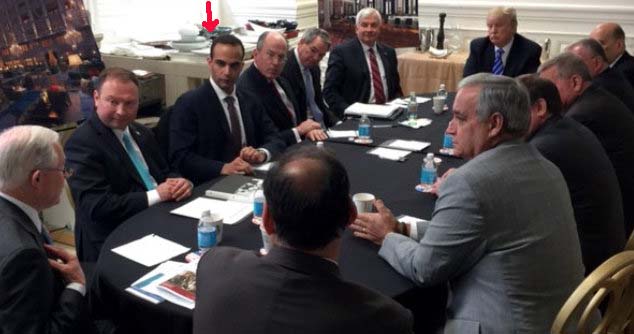 Could do the Orange Oaf enormous damage.

For starters, the plea describes Mr. Papadopoulos’s efforts to gather negative information on Hillary Clinton from officials in the Russian Foreign Ministry and a Russian professor who told Mr. Papadopoulos that Moscow had “thousands of emails” of “dirt” on Mrs. Clinton.

This paints perhaps the clearest picture so far of Russia’s attempt to provide assistance to the Trump campaign — and the willingness of at least some campaign staff members to accept that assistance.

Not only because the evidence against him could be used to charge the Trump campaign with collusion. But also because of this:

The episode that prompts the guilty plea is a virtual carbon copy of the infamous July 9, 2016, meeting that Mr. Manafort, Jared Kushner and Donald Trump Jr. attended with a Russian lawyer.

If any of the principals in the July 9 meeting lied to the F.B.I. about what transpired, they are in immediate criminal jeopardy for the same reasons for which Mr. Papadopoulos had to plead guilty. No doubt Mr. Kushner and Mr. Trump Jr. are huddling with their lawyers and wondering if they are next.

For should those two members of his family also be indicted, I think that would be enough to drive Trump over the deep end.

His presidency in unravelling, and the only questions are, when will it be over?

And how will it end?

With a straitjacket or with handcuffs? 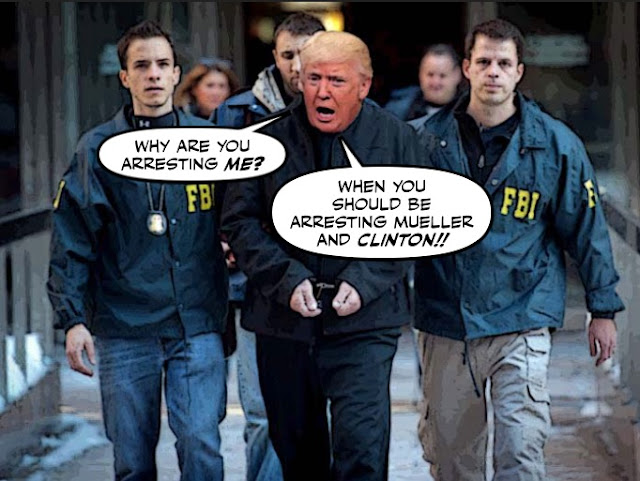 But at last there is a glimmer of hope that justice will prevail.

And that the monster Trump will end up where he belongs... 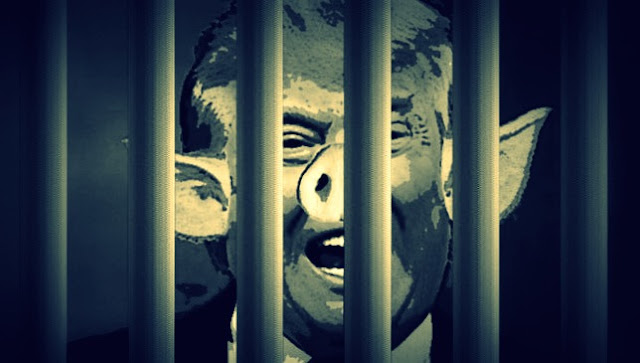 It's so nice how Mueller is slowly turning the screws on Trump, making him squirm like the lowly snake that he is.
Then the liar in chief calls Papadopoulos "a liar". No Donald, I'd say you got that market covered.
JD

Yesterday was lovely. Then we had Stephen Corbett, Trevour Noah, and Seth Myers to give it just the right kick. Manafort and Gates may well be reviewing their options when it comes to rolling over on Trump and Sessions. Spending all that time in an American jail will not be fun. it won't even be that great if they get to go to one of the "country club" jails. If they wind up in one of Session's private jails there is a good chance they won't come out alive; bad food, lack of medical care, brutal conditions, etc.

Trump goes off to Asia this weekend for a week, I'd suggest that may be well when the other shoe drops.

Hi JD...yes, every time I see Trump calling anyone a liar I question his sanity. I know he can't spell it, but does he even know what hypocrisy means? It's such a beast, I can wait until it's caged...

Hi e.a.f....knowing the kind of people Trump surrounds him self with I would not be surprised if they all start singing like canaries. I fear Trump is planning to fire Mueller, but if that happens it will sooner or later lead to his removal from office. This madness can't continue.,.

Perhaps he can try to claim asylum while there?

I suppose I should read the indictment against Popadopoulos for the details but from media summaries his story reads more like a plot form a Sax Rohmer novel than anything else. He met a professor in London?

At the moment I figure the the story may indicate official Russian collusion or that a rather gullible young man got played by someone for who knows what reason. Heck, it could have been the DNC. And that assumes the FBI has not mucked things up. I tend to view the FBI as a barely competent and overly politicized organization.

What I find more interesting is this quote form the Washington Post.

Trump is also increasingly agitated by the expansion of Mueller’s probe into financial issues beyond the 2016 campaign and about the potential damage to him and his family.

I am just about certain that Trump is guilty, I'm just not sure he is guilty of what the US press is howling about. A look into Trump's financial dealings is likely to show huge involvements with oligarchs from Russia and some of the Central Asian republics that were formerly part of the USSR. If Monafort is in trouble for money laundering just think what Trump and his close associates are facing.

And, when you come right down to it, who, except the Americans, really care if there was a bit of collusion with the Russians? A country that has spent over 100 years interfering with other peoples' governments should expect a bit of tit-for-tat.