Save the USA Mock the NRA 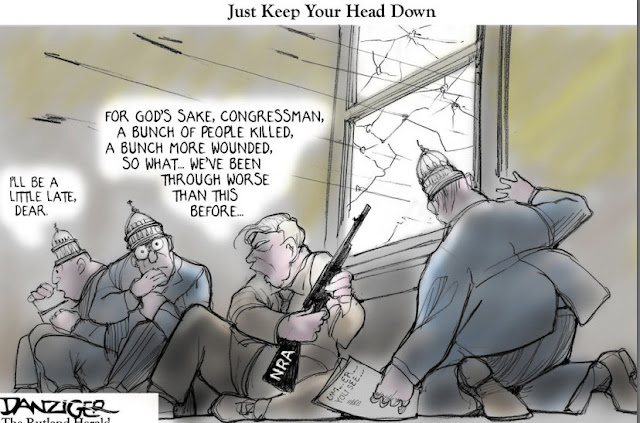 It's now been more than a week since the massacre in Las Vegas, and as you can imagine the NRA and their friends in Congress are feeling slightly beleaguered.

And have been keeping a very low profile.

It's just not that easy to explain how a guy with 42 guns could kill 58 people and injure more than 500 others.

But after taking some time to think it over, the NRA have now declared that nothing could have been done to prevent that tragedy.

But unfortunately for the NRA, and luckily for us, a Dutch TV program thinks it has found a way to help our poor neighbours.

But of course, this is still in the planning stage. The Europeans say they're not coming to America until it's safe to do so.

Especially since the right-wing lunatic fringe is blaming the tragedy on everything from an Antifa plot to kill white people, to a pagan blood festival.

And tragically there are only 75 shopping days before Christmas... 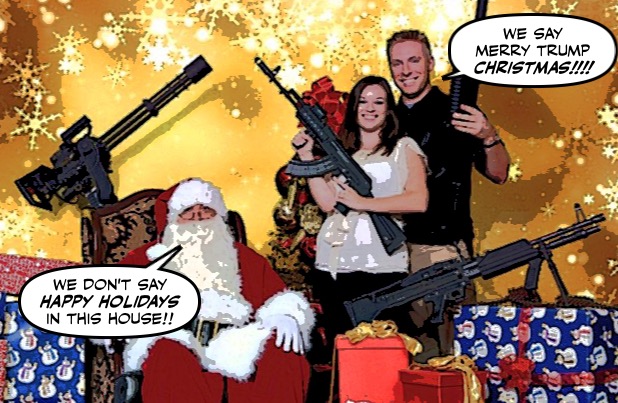 Hollywood has, to coin a phrase, a role to play in this. Not the only role to be sure, and certainly not the biggest. That title by far goes to the gun lobby and the soulless congressmen they've bought. But symbolically, now that the horror house of Weinstein is crumbling down, it's time for them to also put their money where their mouth is and rip out Charlton Heston from the Walk of Fame just like the statues of Covfeferate soldiers are being toppled. Rambo Reagan -- who fought against gun control, even as his former bodyguard launched a campaign (the "Brady Bill") after the president was nearly assassinated -- and Dotard Trump, enabler and perpetrator of carnage and madness at home and the world over, both need to go too.

The choice of "Moses" as spokesman for the gun lobby is disturbingly on-point for how "sacred" guns are to the American identity -- ironically in a way that the Founders, who were freethinkers and Deists, would likely recoil at. After the Vegas massacre, there were calls even by the few remaining sensible conservatives (one of them even writing in the New York Times) to call a convention and just repeal the Second Amendment already. 'Course it will never happen, because "that's just the price we pay for freedom" as the noxious predator O'Reilly said. A bigly yuge exchange of blood money between the gun lobby and Congress. Tithes in the collection basket, an absolution of sins and a washing away of bloody hands in the tainted holy water.

So, not only do the NRA and their congressional and media-arm merchants of death need to be mocked and insulted repeatedly, but so too does America's psychotic death cult and self-worship need to be eviscerated as the downright "demonic" insanity it truly is. If necessary, use their own stale fairy tale against them: I'm reminded of Kevin Bacon in Footloose reading scriptural passages about dancing to the ultra-religious town council that had banned dance and music and pretty much any form of having fun. Point out the hypocrisy of their worship of statues and elevation of the Constitution to the status of scripture, their veneration of the Founders as demigods, and their blasphemous designation of America as the infallible, God-given Jerusalem on Earth.

Secular and logical arguments clearly haven't worked, and won't work when the subjects you're dealing with are wholly and completely irrational. Neither does pointing out the heartache of mothers grieving the deaths of their children in a kindergarten class when they go ahead and say that Abraham did not suffer from obeying God and attempting to kill his son. So use their prophet's words against them and show them the error of their ways. "Whatsoever ye do to the least of my brothers, ye also do unto Me." (Matthew 25:40)

If that doesn't work, I don't know what will. "Thoughts and prayers" are about as effective as the Peyton Manning NFL TV ad for how "real men" heal from serious injuries: "rub some dirt on it." (A phrase abstracted in social media to describe the GOP's nonexistent healthcare proposals.) Not only because mindless cult followers have no "thoughts" to begin with, but because prayers are useless by themselves if not backed up with concrete action.

At least you might get some of the "sheeple" on the right side. The far more difficult task will be in penetrating the GOP's very powerful golden-calf cult. As the Barenaked Ladies once sang, "If I had a million dollars" -- I'd buy... at least 0.000001% worth of what would otherwise be the NRA's vote in Congress...

on to top it all off it was a millionaire white guy who did all the shooting. wasn't supposed to be that way. white guys and the NRA all need guns to protect themselves from all those black guys. Now it turns out the white guy was killing the other white guys. Gee what is the NRA going to do about that. then there is all that stuff for the Congress people to think about. 500 voters got shot. gee, some people might start thinking it could happen to them. When it was just white kids who were mentally ill with guns or some terrorist, it was O.K.

What is very interesting is the NRA and those white guys in Congress aren't referring to the shooter as a terrorists. I guess rich white guys aren't terrorists even though they are terrorising the general population. there will be more of this and the NRA is shitting bricks because it just might be the end of them and certainly may be the end of some guy advocates up for re election next year. How will those up for re election explain why they support these types of weapons when all those Americans got shot by a rich white American at a country music festival. That is not supposed to happen.......welcome to the real world.

Here's Peggy Noonan, "And here is the horror for me of Las Vegas. I was not shattered. That shatters me," she writes. "It's not the new normal, it is the new abnormal and deep down we know it's not going to stop.”

From 2016: Why the U.S. will never fix its gun problem (Audio)
http://www.cbc.ca/radio/thesundayedition/america-guns-and-violence-remembering-beaumont-hamel-the-backfire-effect-1.3637113/why-the-u-s-will-never-fix-its-gun-problem-even-after-sandy-hook-and-orlando-michael-s-essay-1.3638661

Funny, the Netherlands are just as infested with Calvinism as Switzerland and Scotland are, so they might be able to latch on to that thread in the USian psyche... Though at the same time the USians are so into excess, not thrift.

The proverbial Dutch bottle scraper: https://en.wikipedia.org/wiki/Bottle_scraper When in Amsterdam, a friend from a proverbial Clydeside shipyard proletarian family (though he speaks with the educated Scottish accent understood by all anglophones) and I were having a great laugh about that gadget.

Gun sales revenue in the US is approximately 14 billion or the equivalent of the sales generated by all patriotic Americans dining at McDonalds once a quarter. Apple could buy the whole industry without making a significant dent in the spare cash they have lying around. So how does a petty player wag the whole political system?
The answer is it is the political system and their backers that are wagging the petty player and indirectly the voting public. Why would they do this surely they could choose sides over the number of times a good patriotic family should eat a McDonalds or whether the NFL players are allowed to kneel during the anthem. With the right spin these issues could be just as partisan but less deadly. However these other issues don't fit in with Republican strategy to give the top echelon total control of a democratic system. They need things like guns, drugs, religion, bad guys, and terrorists to do that. The relationship is simple for example guns result in violence which needs stronger authoritarian systems such as police and legal systems to deal with it. Incompetently administered these systems become a self reinforcing loop with power concentrated at the top. This is why the Republicans support anything that reinforces the power of authoritarian systems police, military,justice,religion and downplay social systems requiring a wide range of participants such as education and health care. Its all about creating self reinforcing control systems regardless of human cost. Trump has just taken the strategy that perhaps still contained a small amount of social conscience and kicked it up into the do or die category.
RT

hi anon...super comment as usual. I have never understood why the NRA has such a hold on the American people, when a small percentage of them owns about 90% of the guns in your country. But maybe it's the mystical hold of the Second Amendment that's responsible, even though the founding fathers must be spinning in their graves at what it has become. And of course we Canadians have no right to feel superior, because any mentions of restricting gun ownership elicits the same rabid howling from the same crazy gun lobby. The ones who with the help of our RepubliCon party did away with the gun registry, and made the lives of police officers and other first responders even more dangerous...

hi e.a.f...I shudder to think what the reaction might have been, if a Muslim or a visible minority had been responsible for that massacre. But at least now when the Cons start howling about terrorist attacks and the threat of "radical islamic extremism" we can laugh in their faces, and call them cowardly hypocrites...

hi lagatta...I can't speak for the Dutch, but I can say that apart from a certain dourness characteristic of the older generation is some small highland villages, I haven't noticed that Scotland is infested with Calvinism. Even the very sober Church of Scotland in which I was raised, has become almost progressive and puts the supposedly Anglican Church to shame. And as for thrift, it's a product of historic poverty, and in this consumerist world is a value that should be emulated...

hi RT...I think you're on to something there. The more guns in more hands, the more police and more guns you need to protect you. As I was telling our American friend, I don't understand why the NRA is so powerful, when most guns are in the hands of a small minority, and the money they give politicians is small by comparison. So it could very well be that the tail is wagging the dog...

I wasn't mocking either the Scots or the Dutch, or the Swiss for that matter. Just remembering some chuckles.