The Theocon Conspiracy is Finally Exposed 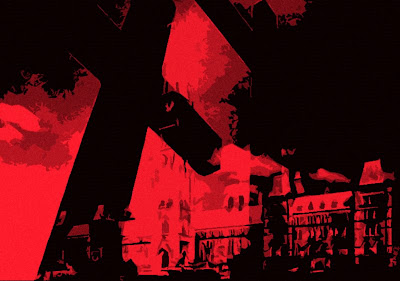 It's the dark secret Stephen Harper and his AmeriCons didn't want anybody to know. That his caucus and PMO are crawling with sinister Christianists who want to turn our democracy into a theocracy.

And Canada into Amerika.

But now the truth is finally out. And it's SCARY.

Already, their alumni have landed top jobs in the public service, MPs’ offices and the PMO, prompting one official from the National House of Prayer to boast in an unguarded moment, “If the media knew how many Christians there are in the government, they’d go crazy.”

Now at last everyone can understand why these crazed thugs want women to be subordinate. Why they don't care whether thousands of poor women die from unsafe abortions. Why they want to hurt gay people.

With the stroke of a budgetary pen, he has defunded agencies such as the Status of Women Canada and the Court Challenges Program, leaving both feminists and gay activists without resources to take on hostile government policies, while his cutbacks to scholarly granting bodies have helped silence environmental critics in academia and science.

And what really happened to Rights and Democracy.

Even arm’s-length agencies have not been safe from his reach. At Montreal’s Rights and Democracy organization, which had okayed three grants to the Palestinian cause, two Harper appointees — chairman Aurel Braun, a militantly pro-Israel political science professor, and vice-chairman Jacques Gauthier, the lawyer for the International Christian Embassy in Jerusalem — engineered a coup that has been blamed for driving out respected international board members.

Others like Paul Wells and our own Dr Dawg have helped shine a light on this theocon conspiracy.

And I've done my humble part.

Please buy this book and share it with your friends and neighbours. 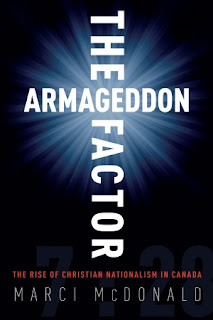 Because the day Canadians understand how these sinister Cons are trying to turn our country into Amerika. And our democracy into a brutish THEOCRACY.

There will be a culture war like this country has never seen.

And the Cons will be DESTROYED...
Posted by Simon at 9:13 PM

WEll, a lot of folks aren't getting that in order for the cons to be destroyed, it will be up to the public to take action. Simply waiting for and whining about Iggy not zapping Steve with lasers won't do it.

And no, the NDP will never govern, and the more I see them, particularly after watching Megan Leslie of the NDP yesterday,on Question Period, hinting her support for Twiggy mullet-head Hoeppner on ridding Canada of gun control because 'it's so heartbreaking to watch Canada be divisive'. Not the first such opposition against the Liberals from them neither.

No, either we must push for a Liberal NDP coalition (and I don't see that happening: I see NDP getting swallowed up by Steve; they will end up the king maker) or hold our noses and support Iggy and the Liberals.

But this bitching and whining about opposition only helps Steve as does supporting exclusively the NDP these days.

Not a big fan of the Liberals neither as they've been corporatist as well, but let's face it, we're a corporatist country.

hi ck...whether the dummies in Canada realize it or not, a coalition is the only solution if we are ever going to beat the Cons. I'm hoping the British will make the idea of a coalition more palatable. But this country is stuck in a such a rut, and so many people are so débile as we say in Quebec, I'm not optimistic...