Gay Pride and the Apartheid Controversy 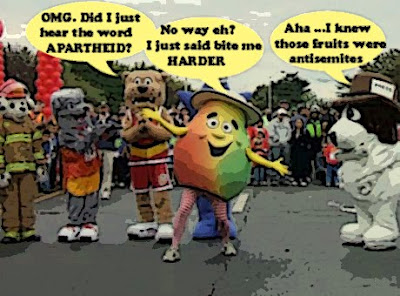 Oh boy. Sometimes it's not easy being a gay guy. First  my beloved Montreal Canadiens get hammered by the goons from Philadelphia. Which depressed me deeply.

Then I read this story.

An outgoing gay rights activist is recovering from a vicious mugging that police describe as having “overtones of a hate crime.”

Chris Rabideau, 26, suffered a concussion, a broken nose, a swollen right eye and bruising on his face and neck when two male robbers beat him unconscious on Friday morning.

Which made me really angry.

And then I read this one.

And I didn't know whether to laugh or cry.

Let me get this straight... if you'll pardon the expression. A motley group of scummy politicians, homophobes, and Greater Israel lobbyists puts pressure on the Pride Committee, and they cave because they can't afford to lose any more sponsors. How humiliating ....and INFURIATING.

And anybody who says that this parade has ever been hateful against ANYONE... 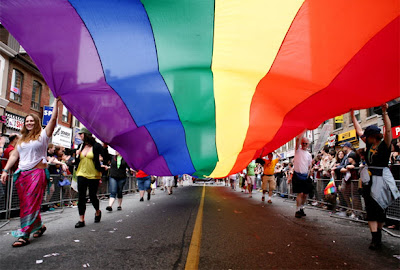 Should get his or her head examined. Because if these bigots and fools lose any more I.Q. points we'll have to WATER them.... with our super soakers.

On the other hand I'm not too impressed with the Queers Against Israeli Apartheid group either. I recognize that the Israeli-Palestinian struggle is the central event of their lives. I identify with their oppression. Just like I identify with the Jewish struggle for survival.

But Gay Pride Day is the day when we remember OUR cause, and OUR martyrs.Like the millions of gays who live in fear in Arab countries, and the ones who are routinely butchered by the thugs from Hamas. And this group doesn't. Not even for ONE day.

You know there is a tendency in some progressive circles to downgrade our gay struggle, to stick us at the back of the bus. Even though we are the most persecuted minority on earth. I don't accept that horseshit  from straight groups, so I'm not about to accept it from a queer one.

Not when gay people are being attacked right here in Canada... 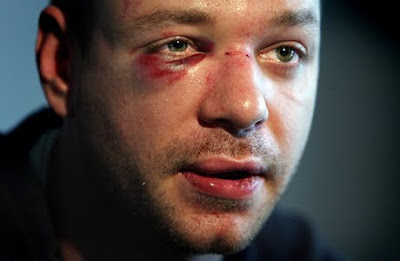 And Stephen Harper's foul Cons are waging war on the rights of gays and women.

Oh well. At least this pathetic controversy has convinced me of one thing. I'm going to have to be a volunteer.

First the Canadiens fold. Then the Pride Committee caves. Then the homophobes celebrate. Now I'm condemned to wield a broom instead of doing a glamorous job like security because Sébastien says I like to fight too much?

Oh boy...I mean oy vey. As I said in the beginning.

Sometimes it ain't easy to be a gay guy.

And sometimes it's FABULOUS ...

But Gay Pride Day is the day when we remember OUR cause, and OUR martyrs.Like the millions of gays who live in fear in Arab countries, and the ones who are routinely butchered by the thugs from Hamas. And this group doesn't. Not even for ONE day.

I dunno, Simon. There is no one isolated cause in this world. There are always links and conjunctions, whether we consciously make them or not.

We don't know that QuAIA is unconcerned about Hamas and Ahmadinjad's thugs. They're putting their bodies on the line, linking up with other victims of oppression.

That's surely just as worthy of celebration as Kulanu and their forest of Israeli flags. I'd say more so, actually.

hi Dr Dawg...I do believe that NOBODY will be free until EVERYBODY is free.
And I don't want to take the focus off the villains of this story...you know the usual suspects who want to prevent any criticism of Israel. But I checked out the QuAIA site and something about it bothered me. I don't think there is enough content on the plight of gay Palestinians. The Palestinian Authority does nominally protect gay rights, but the situation in Gaza with the religious fanatics from Hamas is very bad. So I just wish that they could acknowledge that reality on Gay Pride Day. They have 364 other days a year to picket the Israeli embassy so all I expect them to do is put more emphasis on the homophobes on OUR special day. I would expect every other group including Kulanu to do that, and on that day at least I would expect a forest of gay flags everywhere.
On the other hand I'm not saying that they shouldn't say what they want to say, and maybe I'm just a bit grumpy. As I think I made clear in my post I have a lot of other reasons to feel that way... :)

I understand Israel's concern with its survival and I certainly support it. I also sympathize with the plight of the Palestinians, many of whom are just innocent people.

What I take issue with is the interference of homophobic city councillors and gutless corporate sponsors threatening to withdraw funding. I also take issue with the B'nai Brith saying that QuAIA has "highjacked" the parade and that it should be about celebration, not politics.

Excuse me? Who are they to define gay pride to those of us who made it happen. The parade has always been political. In 30 some years it has never been censored, until now.

I also think the parade should be political but we don't need no Middle East politics. I don't care which side they're on if they don't want to celebrate the gay throw them out !!!!
Besides the parade is too long anyways.

hi Fillibluster...yeah you're quite right. The most galling thing about this pathetic affair is the pressure that was brought to bear on the Pride Committee, and the outrageous slander that our parade was anti-semitic.
Gutless is the right word. As for B'nai Brith they've got a nerve sticking their noses into it, when they have been associated with some of the worst homophobes in the American Christian Right.
The whole thing is sickening. Part of the problem as I see it is that the whole thing has become too big and too commercialized which forces us to depend heavily on sponsors.
I would prefer a smaller, less commercial, and more more politically gay event. But judging from some of my friends I'm not holding my breath... :)

hi anonymous two...I agree with you too. This is OUR day and people should respect that. I think that if we got rid of some of the absurd groups in the parade, and allowed people to march behind their favourite groups or floats it would be a shorter but more exciting event.
After three hours in the blazing sun all I can usually do is find a cool place and lie down. Which is a pity...;)