Stephen Harper as a Humanitarian??? 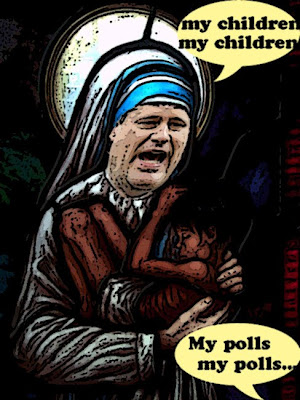 OMG.Hally hally boobah.I knew the monster was desperate. I knew he needed a makeover badly.

But who knew it would be Mother Theresa?

This from a man who has done nothing to tackle the shameful child health problem in Canada.

In 1980, Canada's infant mortality rate was 10th lowest in the industrialized world. It now sits in 24th spot.

Factors affecting infant mortality include the growing gap between rich and poor and the child poverty rate.

Where living conditions in some aboriginal communities are as miserable as many in third world countries. Where despair rules, and kids hang themselves all the time.

This from a man whose first act was to hurt women and children by destroying plans for a national daycare system. And removing the word "equality" from the Status of Women's books. Because his wacko church tells him women are subordinate, and should stay at home barefoot and pregnant.

This from a sinister Con ideologue whose political thugs have been attacking decent humanitarian organizations like KAIROS, Rights and Democracy, and even the United Nations.

Toews' statement in the Jerusalem Post that Canada has "pledged $20M towards training prosecutors, judges and police and building up the Palestinian judicial sector'' is in keeping with what Canada has been doing elsewhere, notably in Haiti. There, Canada has been building prisons and training police forces as opposed to the usual forms of humanitarian aid.

Because he'd rather build prisons than feed people.

Gosh.Great Ugly Leader reborn as Great Mother Leader? The ,desperate idiots in the Con War Room must think we're as stoopid as they are.

But hopefully this time it won't work. Hopefully Canadians will realize that Harper is just trying to remake his image into a softer gentler version. As he does every time he goes over the deep end, and acts like a crazed, power hungry dictator...who would do ANYTHING to win a majority.

Even if it means playing politics with the lives of women and children. And posing as a humanitarian.

Oh boy. How do we know where to find Great Mother Leader....now that Parliament is CLOSED ? 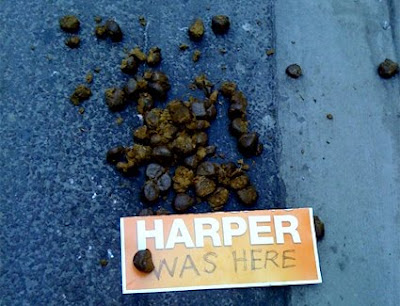 How do we let those desperate losers in the Con War Room know that if they think we're IDIOTS...who can be fooled by fake sincerity and staged photo-ops...we think they're MONKEYS?

Answer: By softening them up with a bunch of bananas.

And giving them a camera...

The Cons as strategic geniuses?

Stephen Harper as a HUMANITARIAN?

The psychopath must be stopped.

Gawd, I love you, Simon! You think like me, only you put it so much better than I can. I mostly splutter with rage! Thanks for writing my reactions & thoughts again today!

Its much worse than we thought.
Hells bells Davos is Thursday. And yeah Canada is the big speaker. Lies and more lies will be spewed. Today England said they were in a 'recovery', that's like 3 times in the past 3 months, as if it was the First Time. :roll:

This year's theme is "Rethink, Redesign, Rebuild" -- after last year's disastrous financial crisis. Oy fey, vey, coal in my stocking. Can't we instead have a Reelectamajority? Can't instead WE outdo, outwit and outlast these prick liars. How come Haiti is so committed to, why not Rwanda or other African wee countries, why is all the money flowing to Haiti. That comment has nothing to do with the severity of trauma, it's that if 'they' come together for an island, what about the other nations?
They are LIARS, all of them. http://www.ft.com/indepth/davos LOL buiness leaders voice confiden! This is absolute bullshit Read the rest on that link, but for sure Davos has nothing to do with Recovery. The titans will be sharing/cutting the oils of Iraq/Afghanistan/(prolly Haiti)

He was responsible for organizing Davos' security. The day before the World Economic Forum? And our PM is going to be there. This guy headed the security since 1984, so what really happened?

hi fern...thanks...the day the psycho is stopped we will all hugz each other... :)

hi CanNurse...thank you...believe me it's a pleasure. :)
When I saw Harpo trying to pose as a humanitarian I just couldn't believe it. What a nerve. Of course I can imagine what the Cons are thinking. If we could get a lot of Canadians to think that Stephen Harper was human just because he can play the piano, we can make them think ANYTHING. Ugh.
Hopefully though, Canadians and our dumb media won't be so easily fooled again.
Because if they do I'm going into exile... ;)

hi Toe...yes the thought of Harper at Davos does send a chill down my spine. But I see that Margaret Atwood is there, and I have high hopes that if Harper starts spewing nonsense she'll bring him down to earth with bang.
And remember, thanks to his stirling non performance at Copenhagen, the world has a pretty good idea who Harpie is, so I'm sure anything he says will go in one ear and out the other. The man is a joke wherever he goes.
As for the weird happenings at Davos...I've always thought that cultish meeting would make an excellent setting for an Agatha Christie novel... :)