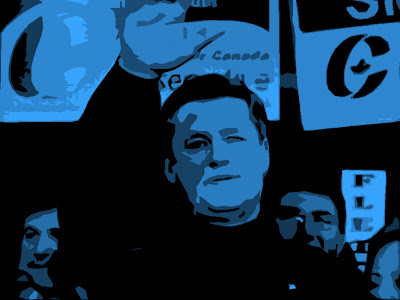 Can you believe the timing? Tomorrow's rallies for democracy will take place on the fourth anniversary of the day Stephen Harper and his Cons came to power.

He promised to change Canada beyond recognition. And boy did he ever.

Once we were peacekeepers and humanitarians. Now we're torture freaks and planet burners.

Now this sinister political thug is getting to use his reckless deficit as an excuse, to stab and slash away at government services and Canadian institutions, until the knife scrapes the bone.

Mr. Harper said yesterday Ottawa doesn't plan significant cuts to transfers, although he seemed to leave the door open to smaller trims. “We are not looking at the kind of deep cuts in program transfers we saw by the previous [Liberal] government.”

Last week he was promising NOT to cut transfer payments. Now he says he will.

Bye bye lower tuition fees, bye bye medicare. The young have no future, just a lifetime of low paying jobs. The old will die in hospitals being served watery soup and toast for supper, and using catheters ripped out of corpses.

But then we've changed too.

Four years of HarperCon rule have made us a nastier, meaner, greedier society. And much much more AMERIKAN.

So while I always try to inspire hope in others, I have to admit that I've been slowly losing it myself.

Which is why for me tomorrow's rallies are so important.

Which is why I made slightly different version of a video I first ran last night...

As long as there is resistance there is hope.

Tomorrow let's make our voices heard. We want Canada to be Canada eh?

Down with the AmeriCons and their crazy leader.

whoa...simon, you're getting so strong with your posts!!! wow, that one was blasting and effective!!!

Simon,
False Hope is well known as a mother of all fools living on the face of this planet. She often leads her children to their own demise but she never abandons them until they die.
Cheers

Hi Simon and other commentors. Hope you all went to rallies today. Montreal's was a success although turnout was lower than I would have liked.

hi Scout...thanks... I enjoyed writing it. Sometimes I worry that they'll come out TOO strong. And people will think I'm some kind of wild-eyed radical. :)
When as you know I just want a kinder gentler world, and would rather make videos about life and love. However, that won't happen until Harperion vacates his job, and I want future historians to know that he didn't fool all of us... :)

hi stone1343...thank you...I think that one came from the heart.
Although I also like to think that the video helped. Everybody and I mean everybody...even my close friends...hate my videos. They don't understand why when I'm making them I laugh a lot. But my buddy Angus said I should use classical music so people would take me more seriously. At the time it was another crushing blow.
But now I think he's right. But since I don't know any classical music, except the 1812 Overture... you know the one with the cannons...it's not going to easy... :)

hi anonymous...well that does sound a little ominous. But maybe you are talking about religion. I'm an atheist, but if religion makes people happier I don't mind.
The ones I worry about are the ones who spend their whole lives being so damm miserable. And then try to share that misery with others. Life and freedom are precious anonymous, enjoy them while you can...

hi CK...thanks. I'm glad you liked my video. When they hold a retrospective of my work I'm going to put that on the poster:

As for the rallies I tried to make it to Montreal, but I couldn't, so I went to the one in Toronto and it was GREAT.
I guess I should have tried harder because I was a bit disappointed in the small turnout in Montreal.
But not surprised. Quebecers hate the Harper Cons so much...they don't feel the need to express it... ;)

P.S. we had some Raging Grannies here and they wuz FABULOUS...