Why I Hate Homophobes and Cons 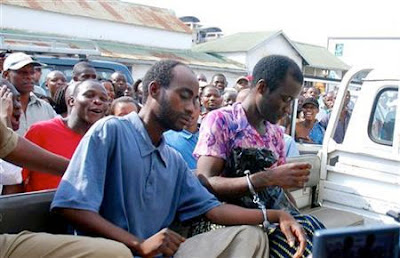 In Malawi, a gay couple goes on trial for the crime of getting married.

Tiwonge Chimbalanga, who has spent more than a week in one of the country’s most congested prisons, vomited and stumbled onto the dusty court floor just before the case was due to start.

As he lay on the ground he was jeered by members of the public who had crowded in to watch what has become a cause célèbre and a test case for gay rights in the African nation.

Just in case you thought that Uganda is the only African country where gays are treated like animals.

At Notre Dame University, where tuition costs are about $40-thousand a year, somebody thinks this is a joke.

What’s the easiest way to turn a fruit into a vegetable?”

Just a few days after a twisted old Pope says gays are a threat to creation.

In the United States two men are indicted.

For this hate crime...

And I get this anonymous comment on my blog.

Simon,
Keep up the good work.
As long as we know that faggots like you hate Harper we know that are in good hands.

But what do you expect eh? When Harper's Deputy Chief of Staff...one of the most powerful men in the PMO...believes that protecting gays from hate crimes is a Nazi thing.

And Harper himself believes that gays choose to be who they are.

Words fail me. It truly is a dark time. The Generalissimo must go down.

He Who Sows the Wind, Reaps the Storm
Simon,
Keep up the good work, as long as you keep on spewing on your blog your hate for normal people you can be assured that other less agressive faggots out there will get victimized one way or the other.

Keep up the blogging about this, keeps us all on our toes.

Do keep up the good work, Simon; and it is good work that you're doing. Anyone who values freedom of speech, freedom of self expression, freedom of choice knows that we must resist the small minds, bullies, bigots, hyper-patriotism hucksters, and religio-fascists of the world if we are to maintain our freedom and identity as individuals. Conservatism, once a semi-legitimate political philosophy, has degraded into an intolerant, xenophobic, homophobic, misogynist, militaristic, christofascist mess of false bravado and chickenhawk/chickenshit machismo. Harper and his ilk are cut from the same rotten, neocon cloth as the Cheney/Bush regime, and they do NOT reflect Canadian values of tolerance, openness, support for social justice, and non-militarism.
Canada was once an honest, third-power broker in the world, seen as a place to be admired for it's welcoming and tolerant, liberal attitudes; a country who's citizens were admired and respected where ever they traveled, not because of domineering military might but because we showed we didn't need that.

Now, instead, we have a government that tolerates torture while denying and trying to cover up it's involvement in it; a government that seeks to expand it's military budget by tens of billions of dollars - and line the pockets of the death merchant weapon makers - while shredding our country's social programs because they despise the people (especially the poor who they blame for their poverty as a personal moral failure); a government that despises the First Nation's peoples, immigrants, GLBT's, intellectuals, scientists (who aren't weapons designers), and artists and anyone else who has the bad taste not to be rich, white, a CPoC party member, and fundamentalist Christian; a government that rolls over for its corporate masters, rapes the environment, breaks treaties, trumpets pointless illegal wars, apes the worst policies and delusions of neoconservatism, and treats democracy and the democratic process like a crack whore.

It never fails to amaze me how conservatives are such complete SUCKERS. They happily do all the heavy lifting for corporatism - oppose universal healthcare, education for the masses, unions, pension plans, consumer protection, environmental and business practices regulations, supporting huge tax cuts for big business and the already uber-wealthy - and them happily pour their precious kids into the bottomless maw of the meat grinder wars that corporatism foists upno them, all the while waving the flag and singing patriotic songs. They're so blinded by this outmoded bullshit they can't see wealthy are laughing at them all the way to their secret Swiss bank accounts

Any thinking person who claims to be a conservative and conducts themselves in this way or holds such a world view should be ashamed of themselves.

I want my Canada back!

Save us from this Anonymous who illustrates the need for this blog.
Anony 10:45 can be assured that he/she is beneath contempt in this anonymous' eyes.
Thank you for your passion, Simon.

hi stone1343...yes they are dark times, but you know what they say it's always darkest before the dawn...

hi anonymous...look I'm not going to even bother replying to your disgusting comment, because it makes no sense at all. You're obviously a deeply disturbed person, maybe a self loathing closet queen, but definitely not normal.
Normal straight people don't obsess about gay people, only straight perverts do. Which reminds me...do you get a woody when you say the word faggot? Because you use it so often I can only conclude that you must be a real wanker. :)
But look, thank you for being a useful bigot, and helping me prove my point: these Cons are krazy and must be defeated.
But I'm afraid you're scaring my readers with your deranged ravings so don't bother sending any more comments because I'll only delete them.
Buh bye bigot...

hi Brahm...thank you I'm glad you like it. I usually try to be as positive as possible, to cheer up our side. But every now and then it doesn't hurt to remind people of the evil enemy we are fighting...

hi ThinkingManNeil...Wow. What an excellent and powerful comment. It's just what I would say. I wish. ;)
Seriously though BRILLIANT. I agree with everything you say. there are some decent Conservatives out there...like my dad. But he'd never go for Harper's Reform/SoCon brand of Conservative. He considers them a miserable gang of uncouth thugs and bullies...just like I do.
And oh yeah...just like you I want my beautiful Canada back...

hi anonymous two...the nice anonymous :)
Yes I'm sorry about allowing that horrible comment. I thought since I used his previous quote in the post I should let him have his say.
But I really shouldn't have forced that sinister stuff on others. The world is disturbing enough.
So if he sends me any other comments I shall simply delete them.
This may be a humble establishment but we have our standards... :)

hi West End Bob...you know me... I'll never give up. It's depressing stuff, and that bigot caught me on a bad day, when I was all torn up about the tragedy in Haiti.
But all that weirdness and hatred only makes me more determined to defeat them.
And we WILL...

hi Oemissions...yes isn't that a horrible story? It made me feel so sad and angry.
How can people be so cruel?
But as I always tell my enemies eh? I may be naturally lazy and a bit of a dreamer. But the more you piss me off, the more you will regret it... ;)

So how do you feel about concealed and or open carry for honest citizens?

hi Paul...I really don't think it's a good idea for decent people to carry guns. I'm not against the idea of self defence, and I have practiced martial arts for almost 15 years to give me discipline and the ability to stand up to people who might bully others.
But a gun is so final, sometimes even decent people lose it, and it can lead to tragedy.
The answer although you might consider it a bit wimpy is education, education, education, from parents and teachers...