Stephen Harper and his Media Stooges 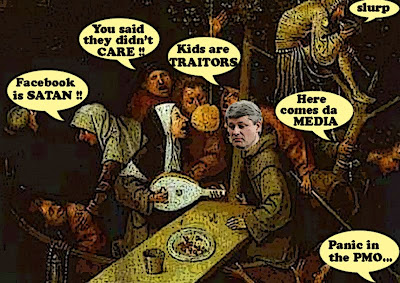 He thought he could get away with it. He said it was just routine. He said Canadians didn't care about torture. He said he needed to recalibrate.

Even though Canadians knew it was just a paid vacation.

He counted on the Con media to shrug its shoulders, praise him for being so clever.

Or drown it in this crock of stinking shite.

As if young Canadians were too stupid to care about saving democracy and their country.

So what are these MSM Con stooges saying now? About this and this.

Let me suggest something along these lines might be appropriate:

Boo hoo hoo hoo hoo. We live in a dank little village called Ottawa. We walk around with our heads up our asses. We polish Great Ugly Leader's bum with our noses. We think cynical is cool. So how could we possibly know how irrelevant we have become?

Or how tragically complacent these Con collaborators have helped make us.

Mr Harper is doubtless counting on the Winter Olympics to reinforce Canadians’ familiar political complacency. But he has given the opposition, which is divided and fumbling, an opportunity. It is now up to it to show that Canada cannot afford a part-time Parliament that sits only at the prime minister’s pleasure.

You know it hurts to have a British magazine suggest that we are too dumb to care about our democracy. One more humiliation that this country must endure. Planet burners, torture freaks, and now authoritarian dummies.

But the fact is we have been spectators rather than citizens for far too long. Looking on helplessly as these monstrous alien Cons raped our country and its values. And this revolt is the best thing to happen to Canada since this one... 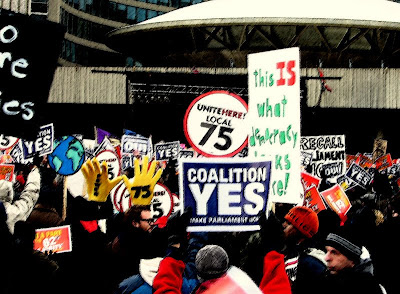 When we took to the streets, and raised our voices to let Harper and his political thugs know exactly what we thought of them.

Which is what we must do again on January 23rd when anti-prorogation rallies will be held across Canada.

To send one message to the tyrant. Get back to work. Take your grubby hands off our democracy. And another message to the Con media... you can shove your sickening, deadening cynicism where the sun don't shine.

Because we are better than you. Young Canadians want their country back.

And the uprising is NOW...

P.S. Don't feel left out if you're not on Facebook. Just do what you can to spread the word about the rallies, make sure you and your friends attend, and I'll make a list of all the times and places here.

Young and old together. Standing up for Canada.

How can we LOSE?